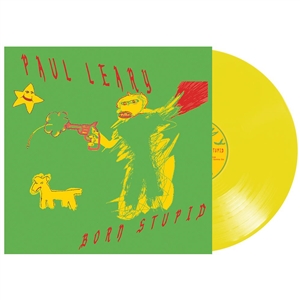 Leary is best known as guitarist / vocalist for the infamous psychedelic noise rock band Butthole Surfers. The Butthole Surfers' aggressively surrealist recordings and live shows have become mythology in the world of underground music. The headline of a 2016 profile in Vice magazine summed this legacy up neatly, stating the "Butthole Surfers Were the Epitome of Every Hell-Raising Rock 'n' Roll Legend You Ever Heard." Beyond the group's extreme persona, Leary was creating seriously brilliant music with the Butthole Surfers. Much of the subversive creative spirit that fueled the Butthole Surfers' best work can be found inside the grooves of Leary's charmingly twisted new album. Musically, Born Stupid largely steps away from the atomic punk energy and fuzzed-out metal riffing that defined the Butthole Surfers' sound. Instead, Leary has crafted an equally compelling soundscape filled with carnival sideshow calliopes, spaghetti western guitar motifs, and off-kilter German beer hall waltzes. But where the Butthole Surfers' work was often squarely focused on the manipulation of sounds and textures, Born Stupid is heavily rooted in the craft of song, and the record's finely structured musical landscapes work to support the stories being sung. Throughout the album Leary is joined by drummer Josh Freese, known for his work with a range of artists, including The Vandals, Guns N' Roses, and Devo.

It's important to note that Born Stupid is released on the newly relaunched incarnation of Shimmy-Disc, the influential independent record label founded by producer / musician and underground music impresario Kramer in 1987. "Paul Leary's first solo LP in thirty years is deafening in its genius. An entire universe of sound and song, simultaneously poignant and pugnacious, fearlessly culled from over forty intrepid years of infinitely mind-bending stupidity. Born Stupid is so inspiring it makes me want to quit music right now, quit while I'm ahead. It can't possibly get any better than this. Too late now, though. I already bought a new turntable. Looks like I'm in 'til the bitter end. Thanks a lot, Paul. I owe you one." -Kramer