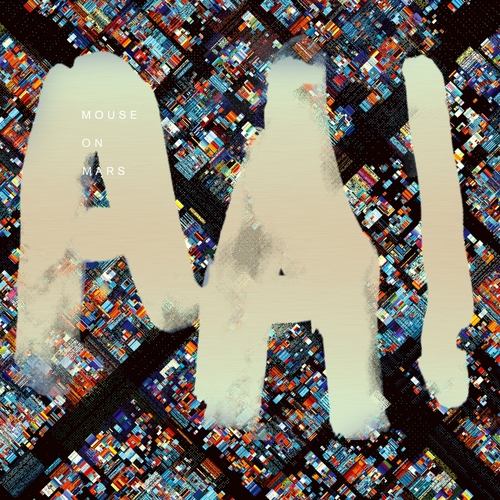 Mouse on Mars, the Berlin-based duo of Jan St. Werner and Andi Toma, approach electronic music with an inexhaustible curiosity and unparalleled ingenuity. Operating in their unique orbit within dance music’s nebulous echosystem, the duo’s hyper-detailed productions are inventive, groundbreaking but always possessing a signature joyful experimentation. A genre-less embrace of cutting-edge technologies have ensured that each Mouse on Mars release sounds strikingly modern, a fact made more remarkable when one reflects on the duo’s 25 years of making music.
New album AAI (Anarchic Artificial Intelligence) takes Toma and Werner’s fascination with technology and undogmatic exploration a quantum leap further. Collaborating with writer and scholar Louis Chude-Sokei, a collective of computer programmers and longtime Mouse On Mars collaborator/percussionist Dodo NKishi, the duo explores artificial intelligence as both a narrative framework and compositional tool, summoning their most explicitly science-fiction work to date.

AAI compiles some of the most immediate and gripping music in Mouse on Mars’ extensive catalogue. Emerging from a primordial ooze of rolling bass and skittering electronics, hypnotic polyrhythms and pulsing synthesizers propel the listener across the record’s expanse. Hidden in the duo’s hyper-detailed productions is a kind of meta-narrative. Working with AI tech collective Birds on Mars and former Soundcloud programmers Ranny Keddo and Derrek Kindle, the duo collaborated on the creation of bespoke software capable of modelling speech. What appears to be Louis Chude-Sokei narrating through the story is in fact the AI speaking. Text and voice from Chude-Sokei and DJ/producer Yağmur Uçkunkaya were fed into the software as a model, allowing Toma and Werner to control parameters like speed or mood, thereby creating a kind of speech instrument they could control and play as they would a synthesizer. The album’s narrative is quite literally mirrored in the music - the sound of an artificial intelligence growing, learning and speaking. Artwork was provided by the inventor of the computer graphics language Processing, Casey Reas, a further exploration of technology’s application in the context of art.

In Chude-Sokei’s text, as machine learning advances, robots begin to develop language, conscience, empathy - “anarchic” and unpredictable qualities. Drawing parallels between the evolution of human and machine, AAI uses technology as a lens to examine deep philosophical questions. The question of how we use technology and world resources feels particularly poignant and timely as we head into 2021. AAI posits that we must embrace AI and technology as a collaborator to break out of our current cultural and moral stagnation, and to ensure our survival as a species.

As Werner explains: “AI is capable of developing qualities that we attach to humans, like empathy, imperfection and distraction, which are a big part of creativity. We need to get past the old paranoia that fears machines as the other, as competitors who will do things faster or better, because that just keeps us stuck in our selfishness, fear and xenophobia. Machines can open up new concepts of life, and expand our definitions of being human.“