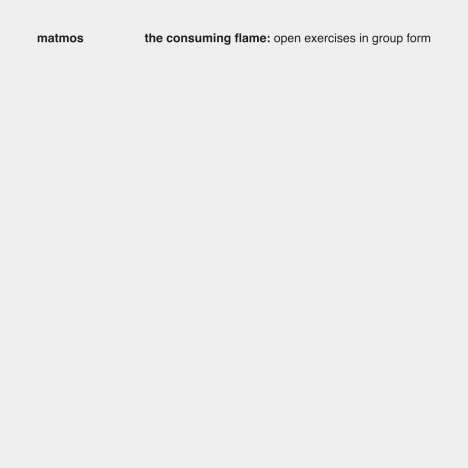 Matmos has a playful nature often lacking in electronic composition, bristling with a palpable sense of wide-eyed discovery undiluted across their 25 years as a band. M. C. Schmidt & Drew Daniel are long-known for their practice of unusual sampling & experimenting with conceptual restrictions. The Consuming Flame: Open Exercises In Group Form is both a tongue-in-cheek rebuttal to the backlash against »conceptronica«, & their most ambitious project to date.

The record is oriented around a deceptively simple commitment. 99 different musicians were asked to contribute: they could play anything that they wanted, but the tempo of any rhythmic material had to be set at 99 beats per minute. The resulting album is a three-hour long assemblage that's a kaleidoscope of genre, mood and density, while all synchronized to a constant underlying tempo.

There's a relentless forward-motion keeping more with traditions of pirate radio and mixtapes than the traditional album format. »The Consuming Flame« was composed through the act of invitation, and the album's 99 participants are, even for Matmos, wildly eclectic. Some collaborators have worked with Matmos for years (J. Lesser, Jon »Wobbly« Leidecker, Mark Lightcap, Josh Quillen of So Percussion, Vicki Bennett) & some are near total strangers. There are players from the conservatory-trained world of »new music« (Kate Soper, Bonnie Lander, Ashot Sarkissjan, Jennifer Walshe) & figures from the extreme music underground (Blake Harrison of Pig Destroyer, Kevin Gan Yuen of Sutekh Hexen, Terence Hannum of Locrian), as well as auteurs from the world of »noise« music (Twig Harper, Moth Cock, Bromp Treb, Id M Theft Able) as well as writers (Douglas Rushkoff, Colin Dickey), and conceptual artists (Heather Kapplow).

The resulting submissions were layered onto each other, prompting later recording sessions which then built upon the first wave of contributions. These discrete zones were then collaged into larger & larger units and more contributors were invited to join until, gradually, the »group form« of three distinct hourlong movements emerged. Part exquisite-corpse & part virtual festival, the results retain Matmos' distinct & unique voice despite the promiscuously open nature of these collaborations.