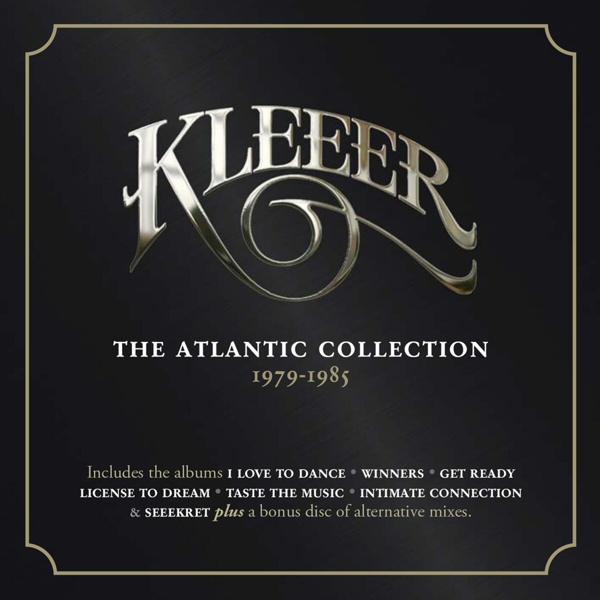 Bewertung:
Warum ist dieses Produkt schon bewertet?
lieferbar innerhalb einer Woche
(soweit verfügbar beim Lieferanten)
EUR 45,99*
Versandkosten
A great collection – 7 full albums from Kleeer, plus a full disc of bonus material too! First up is I Love To Dance – the first-ever album from Kleeer – and a set that's already got them head and shoulders above most of their contemporaries! The set's got just a bit of the keyboards that would later really define the Kleeer sound – and has some surprising disco elements, too – used by the quartet as a way to step away from the overblown mainstream of the time, into a groove that's leaner and cleaner for the next generation! Winners is a record that really has the group solidifying their sound – compressing keyboards, guitar, and grooves together in a sublimely boogie-heavy mode! Kleeer were really at the forefront of the coming 80s groove scene – and Woody Cunningham and the group draw heavily here from their previous experience with Patrick Adams, yet move into a smoother, tighter finish that set a new standard for the coming generation. License To Dream is seminal 80s work from Kleeer – a really wonderful record with a sound that's a heck of a lot more soulful than some of the group's contemporaries! A lot of the credit here goes to singer/songwriter Woody Cunningham – whose lead vocals really give the album a wonderfully solid feel, and push Kleeer away from the cliches of the keyboard-heavy generation – into a mode that sports tight lyrics, heartfelt leads, and a well-rounded sound that mixes equal parts ballads and groovers. Taste The Music is a classic from Kleeer – one of the best groups of their sound at the time – as they always have a perfect blend of new-style rhythms and keyboards with old school approaches to deeper soul grooves! The album's nicely heavy on that extended keyboard vibe that seems to have added that extra "e" to the group's name – and the keys are often used to punctuate the chorus of the tunes, then lay things down for the next round of grooves – all in a style that's very much the group's own! Get Ready is a record that nicely balances their funkier side with a better talent for more soulful styled numbers! The cover's got an 80s "workout" look that makes you worry that the record might be some aerobic material – but the grooves are often far more complicated than that, and stream out with some nice keyboard lines on the best numbers. Intimate Connection is one of the group's standout classics, and a set that's produced with kind of a jazzy finish by Deodato, who also plays some nice keyboards on the record! The Kleeer sound is at its height here – tight, warm, and filled with great harmonies on the vocals – which are then underpinned by a lot of keyboards and bass pedal work, yet in a way that never overwhelms the vocals. On Seeekret, the triple "e" is the key to the album's sound – as Kleeer are still very much at the top of their game, and opening up nicely with that string "wheeet" sound they get on their keyboards! The album's one of their key 80s partnerships with Deodato – who really helps them balance their sound, and come across with a style that's surprisingly rich and soulful – way more so than some of the other beats and keyboard acts of the time! The set also features a bonus CD – with 15 more tracks that include single mixes, remixes, and instrumentals!
8 CD Compilation der 7 Alben, die die Soul-Funk-Band zwischen 1979 und 1985 für das Atlantic Label aufnahm inklusive einer Bonus-Disc mit 12"- und 7"-Versionen ihrer größten Hits.