King Crimson: In The Court Of The Crimson King (50th Anniversary Edition) 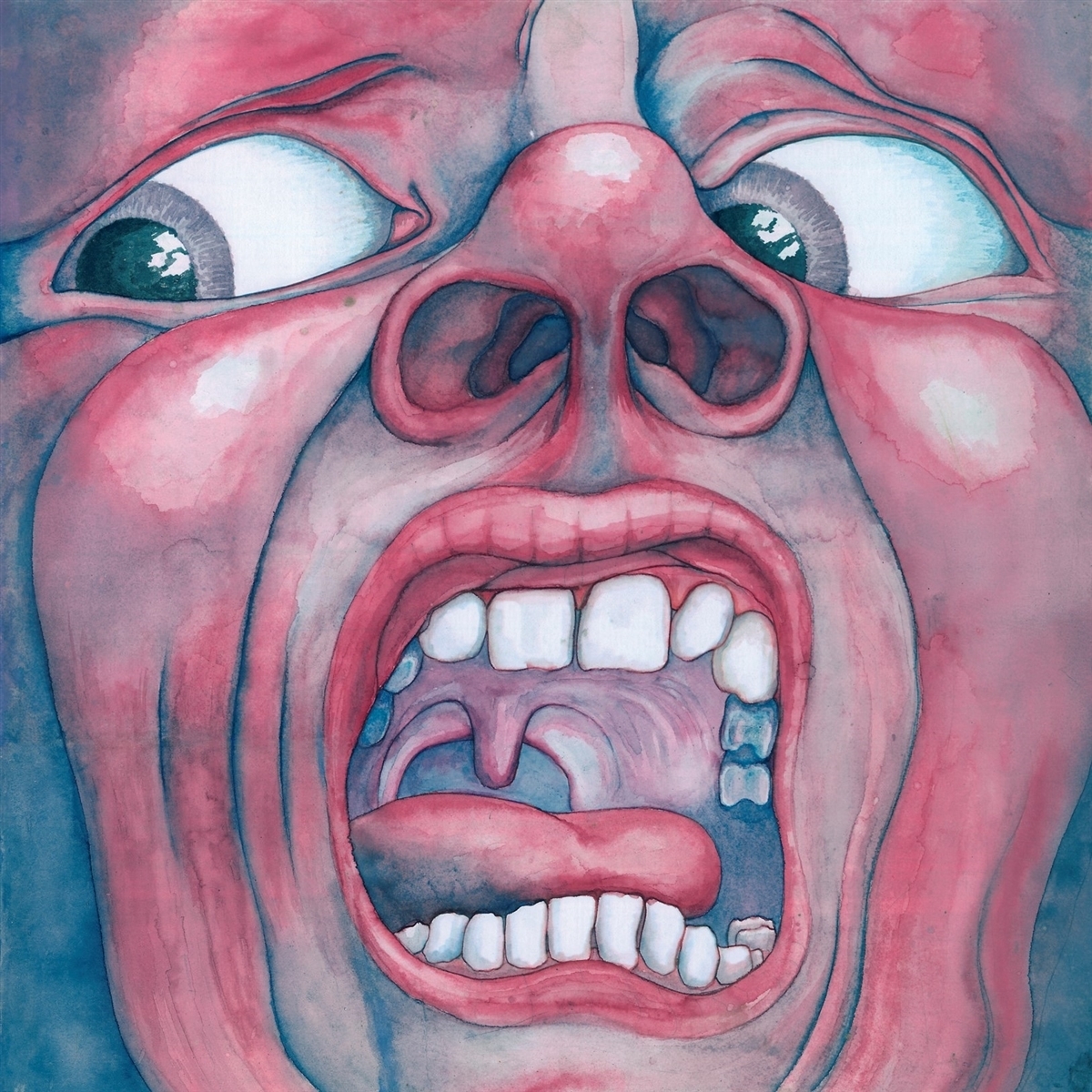 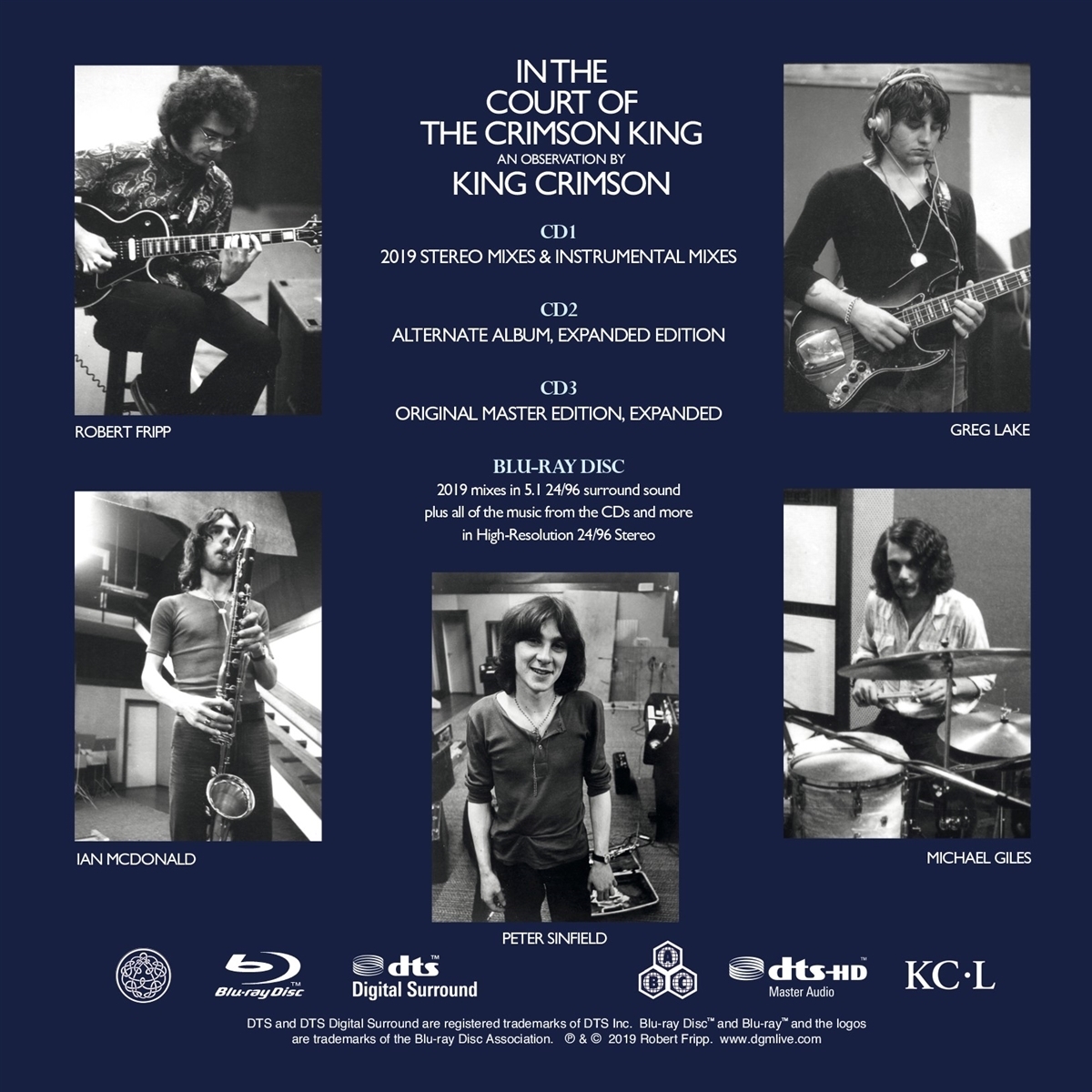 Weitere Ausgaben von In The Court Of The Crimson King

* 2019, 5.1 and stereo mixes by Steven Wilson in 24 / 96 resolution (for the first time)
* Original master edition of the 1969 album mix in 24 / 96 stereo.
* A complete alternate album comprising 2019 mixes by Steven Wilson including a much extended duo version of I Talk to The Wind, a June 19th version of ‘The Court of the Crimson King’ from the band’s final day at Morgan studios in June 1969, an isolated voice dominant version of ‘Epitaph’ & a version of ‘21st Century Schizoid Man’ which combines the Morgan studios instrumental with Greg Lake vocals from Wessex studios and August 2019 overdubs by Mel Collins & Jakko Jakszyk – the latter two mixed by David Singleton.
* A further album’s worth of additional material drawn from studio takes - much of it mixed by Steven Wilson & including extracts from the ‘wind session’ that produced the intro to 21CSM in stereo for the first time, the single a / b sides of the album title track drawn, for the first time since on disc, from the original master tapes & more are also included.
* The Blu-Ray is completed by a set of 2019 instrumental mixes and the surviving fragment of black & white footage from Hyde Park in 1969
All material on this set will also feature on the forthcoming Complete 1969 Sessions (the eighth boxed set in the series documenting King Crimson’s studio and live recordings from 1969 onwards).

As a preamble to a recording take, it’s not exactly clear whether it was meant to be an attempt to focus minds or a witty intro to a take countdown. It was of the moment, with no intention of ever being heard again. Nobody knew it would turn out to be prescient as Crimson, barely five months since formation, laid down tracks for sessions for a proposed debut album – sessions about to be abandoned in favour of a move to another studio and total self-production weeks later. Fifty years on, the album is one of the most beloved & revered in the rock music canon. The 50th anniversary edition features completely new mixes of the album in stereo & 5.1 by Steven Wilson, with the album presented in 24 / 96 resolution in multi-channel for the first time. The multi-channel master also includes the extended duo version of ‘I Talk to the Wind’ in 5.1. This track, much longer than the version mixed in 2009, also features in stereo along with newly mixed versions of other session tracks in stereo and a full set of instrumental mixes. In 2009, Court was one of the earliest of Steven’s 5.1 mixes of albums on which he or his band were not the main artist – along with Lizard & Red & while the King Crimson 5.1 series was, to a large extent, key to the revival of 5.1 for audio – an audio form the major record companies had all but abandoned as a result of the dual format confusion of sacd / dvd-a almost a decade earlier, Court was the one album of the many 5.1 mixes he has successfully undertaken which he wanted to revisit. The 50th anniversary and the first release on Blu-Ray provided just such an opportunity. Nor are these the only new features on the set.
The original studio instrumental take of ‘21st Century Schizoid Man’ has been completely re-imagined & mixed by David Singleton, with the addition of Greg Lake vocals from the later studio sessions at Wessex & contemporary sax & guitar overdubs by Mel Collins & Jakko Jakszyk – providing a link between the original band, the early 1970s line-up and the current band. David Singleton also contributes a mix of ‘Epitaph’ which highlights & isolates Greg’s vocals from the original studio sessions, showing just how spine chilling and powerful that vocal delivery was – an incredibly mature sound for a young man to achieve in his first major studio recording. Among the many tapes newly transferred or being transferred for this (& the forthcoming, much larger, boxed set of Complete 1969 Recordings), was the original tape of the Island released ‘The Court of the Crimson King’ single which had been previously dubbed from a 7” single as a curio. These and many other tracks give a comprehensive overview of one of the classic albums.
The Alternate album appears, quite deliberately, in slightly different track-listings on the Blu-Ray & CD (& on the accompanying double vinyl set). The aim on the Blu-Ray was to provide a fully sequenced listen that closely resembled the original album running order. This was extended on the CD, gathering many of the new mixes on one disc & revised again to make for a satisfying listen on vinyl.
In common with all other King Crimson studio albums in the format, the 5.1 mixes are being made available in this affordable set rather than being held over exclusively for larger expensive boxed sets, a practice that limits the availability of the music in multichannel audio to the detriment of artists and fans alike.

It’s a quote that’s forever associated with the album. It was used in advertising at the time of release. Unlike many claims made in advertising it has, like the album it heralded, stood the test of time. It’s easy to forget how quickly things moved for the first incarnation of King Crimson: Formed January 13th 1969; by April they were regulars on stage at the likes of The Marquee and The Speakeasy clubs & performed with Tyrannosaurus Rex at The Lyceum, by May recorded the first of two BBC sessions, initial (abandoned) album recording sessions in June & then, in early July – the big breakthrough – played to 650, 000 people in Hyde Park supporting The Rolling Stones, the album recorded in August, signed to Island Records (& Atlantic in the USA) Atlantic, missed the Isle of Wight festival due to illness / exhaustion, more gigs & a second BBC session in September, a Top 5 charting, unanimously lauded album in the UK, followed by a Top 30 debut in the USA weeks later, then toured the USA – with concert appearances at legendary venues such as the Boston Tea Party, Chicago’s Kinetic Playground, New York’s Fillmore East & another appearance on a bill with the Rolling Stones – this time at a Miami festival & then, following a series of December appearances at the Fillmore West in San Francisco, it was over, as quickly as it had begun – the arc for the band from formation to dissolution had taken barely more than 11 months, leaving behind an iconic – both musically and in terms of cover art - self-produced debut album, a fearsome live reputation & the sense of a band that, in its brief period of existence, set its own agenda.
King Crimson would return in many different line-ups over the years – each different from its predecessor and, with two concerts at The Palladium in late 2018 & three shows at The Royal Albert Hall in June, 2019, the current line-up has played to more people in London, the city in which it began, than at any point since 1969 & in the process, played more of the material from 1969 than any line-up since the original. The current line-up has, on more than one occasion, been described as “the best live band in the world” – something that also used to be said of the original band.
50 years on, the studio recordings of that first King Crimson remain, uncanny masterpieces.