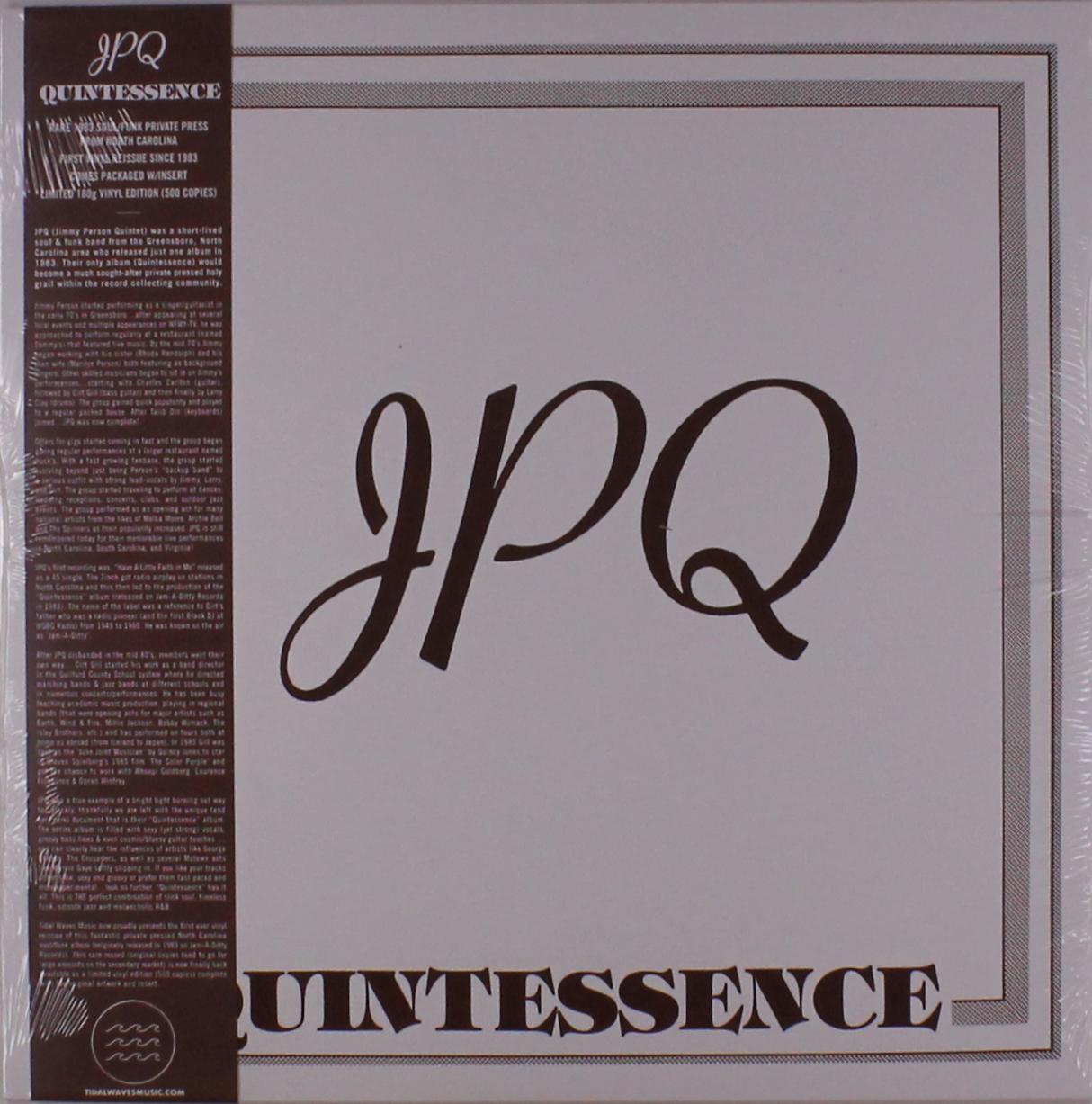 JPQ (Jimmy Person Quintet) was a short-lived soul & funk band from the Greensboro, North Carolina area who released just one album in 1983. Their only album (Quintessence) would become a much sought-after private pressed holy grail within the record collecting community. Jimmy Person started performing as a singer / guitarist in the early 70's in Greensboro_after appearing at several local events and multiple appearances on WFMY-TV, he was approached to perform regularly at a restaurant (named Sammy's) that featured live music.

By the mid 70's Jimmy began working with his sister (Rhoda Randolph) and his then wife (Marilyn Person) both featuring as background singers. Other skilled musicians began to sit in on Jimmy's performances_starting with Charles Carlton (guitar), followed by Cirt Gill (bass guitar) and then finally by Larry Clay (drums). The group gained quick popularity and played to a regular packed house. After Talib Din (keyboards) joined_JPQ was now complete! Offers for gigs started coming in fast and the group began giving regular performances at a larger restaurant named Huck's.

With a fast growing fanbase, the group started evolving beyond just being Person's »backup band« to a serious outfit with strong lead-vocals by Jimmy, Larry, and Cirt. The group started traveling to perform at dances, wedding receptions, concerts, clubs, and outdoor jazz events. The group performed as an opening act for many national artists from the likes of Melba Moore, Archie Bell and The Spinners as their popularity increased.

JPQ is still remembered today for their memorable live performances in North Carolina, South Carolina, and Virginia! JPQ's first recording was, »Have A Little Faith in Me« released as a 45 single. The 7inch got radio airplay on stations in North Carolina and this then led to the production of the »Quintessence« album (released on Jam-A-Ditty Records in 1983). The name of the label was a reference to Cirt's father who was a radio pioneer (and the first Black DJ at WGBG Radio) from 1949 to 1960. He was known on the air as ›Jam-A-Ditty‹. After JPQ disbanded in the mid 80's, members went their own way_ Cirt Gill started his work as a band director in the Guilford County School system where he directed marching bands & jazz bands at different schools and in numerous concerts / performances. He has been busy teaching academic music production, playing in regional bands (that were opening acts for major artists such as Earth, Wind & Fire, Millie Jackson, Bobby Womack, The Isley Brothers, etc.) and has performed on tours both at home as abroad (from Iceland to Japan). In 1985 Gill was cast as the ›Juke Joint Musician‹ by Quincy Jones to star in Steven Spielberg's 1985 film ›The Color Purple‹ and got the chance to work with Whoopi Goldberg, Laurence Fishburne & Oprah Winfrey. JPQ was a true example of a bright light burning out way too quickly, thankfully we are left with the unique (and very rare) document that is their »Quintessence« album.

The entire album is filled with sexy (yet strong) vocals, groovy bass lines & even cosmic / bluesy guitar touches _one can clearly hear the influences of artists like George Benson, The Crusaders, as well as several Motown acts like Marvin Gaye softly slipping in. If you like your tracks either slow, sexy and groovy or prefer them fast paced and more experimental_look no further, »Quintessence« has it all. This is THE perfect combination of slick soul, timeless funk, smooth jazz and melancholic R&B.