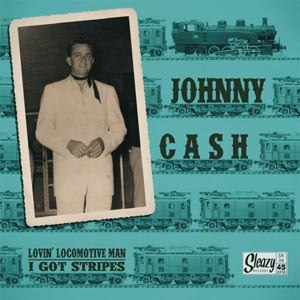 Johnny Cash. Born in Kingsland, Arkansas, on February 26, 1932. Died in Nashville, Tennessee, on September 12, 2003. While Carl Perkins' career at SUN Records was at its lowest point when he made the move to Columbia Records in the beginning of 1958, Johnny Cash was enjoying a wave of success that had let him built a strong reputation based on several number one country hits, a wide collection of memorable songs and, not less important, a very own recognisable sound.

Nevertheless, whilst Perkins' desertion responded to a certain jealousy provoked by the fact of seeing how the company attention had turned to other artists on its roster, Cash had found some other motives to leave SUN: »Everybody was leaving. We didn't like the royalty rate we were getting. [... ] I was paid according to what a small, independent label could pay me at the time. We didn't think it was fair«. Another reason had more to do with artistic growth: »I'd been talking to ot her record companies about things I wanted to do as an artist, and I knew I wouldn't be able to do 'em on Sun«.

One way or the other, he felt sure that »it was definitely time to move on« and, in the summer of 1958, Johnny Cash became a Columbia artist, establishing a long-term relationship full of agreements and disagreements but plenty satisfactory when talking about artistic and commercial results. Nearly three decades that extended the legend and defined the myth of the Man in Black. Leaving apart a personal life adorned with heavy drinking, drug abuse and marital problems, Cash's first years at Columbia were quite productive. His first single for the label (»All Over Again« / »What Do I Care«) entered the Top Ten and the second one (»Don't Take Your Gun s To Town« / »I Still Miss Someone«) reached the Number One.

On the other hand, his discography augmented steadily well into the sixties as SUN kept releasing some of the cuts Johnny had recorded before leaving. The cuts on this plate are perfect examples of Johnny Cash early Columbia recordings. »I Got Stripes« came out on July 1959 together with »Five Feet High and Rising«, another great song self-penned by Johnny. Telling a prison tale with notorious humor, it was his fourth single at Columbia and a big hit that reached the Top Five in the country charts and entered the Top 50 in the pop charts.

On the other side, being a minor addition to the great railroad songs the singer recorded throughout his long career, »Lovin' Locomotive Man« (backed with »Girl In Saskatoon«) was far from enjoying the success of »I Got Stripes«, although Billboard gave the record a four-star »Very Strong Sales Potential« rating. Strange Things Happen Every Day, you know.