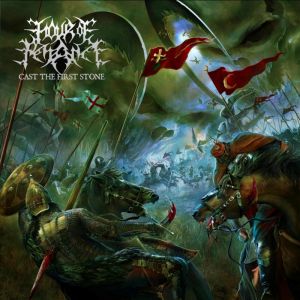 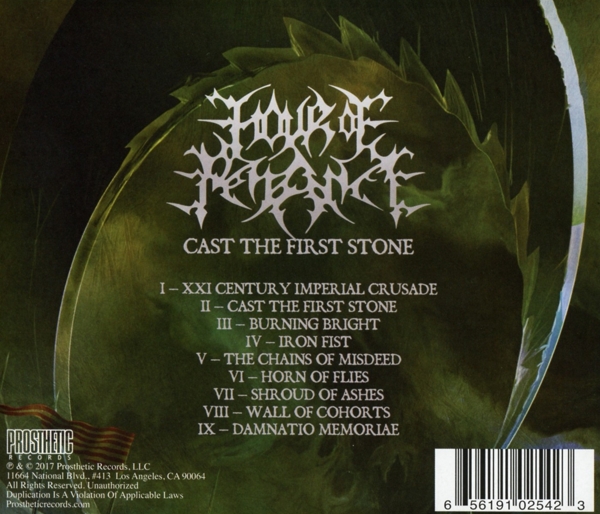 Hour Of Penance
Misotheism
CD
EUR 16,99*
Italy's death metal masters Hour of Penance return to release “Cast the First Stone” as a follow-up of their most recent critically acclaimed effort “Regicide", and as expected it's a sickening, mind-obliterating auditory assault on the senses. A true death metal masterclass. Forged in the dark shadows of "The Holy Capital," this most unholy of quartets have steadily been making a name for themselves as one of the most intense, talented and impressive modern death metal bands both in-studio and onstage.

Religiously releasing an album every 2 years, the band has been described by the fans and worldwide press as one of the most “productive” bands in the genre and “Cast the First Stone” will mark their seventh full-length album to date. Vocalist Paolo Pieri reveals the concept of the new album: “”Cast the First Stone” revolves around the idea that the injustices suffered during the Crusades and Colonialism cannot justify indefinitely a chain of hate that propagandize the destruction of the West. The political situation in recent years has brought to light again a millennial conflict between West and East, and events like the terrorist attack at the Bataclan, where we only played a few months before the massacre, have influenced the lyrics on this record very much.

“Cast the First Stone” was recorded at Kick Recording Studio and was engineered, mixed and mastered by bassist Marco Mastrobuono. Artwork was completed by Gyula Havancsak. Since releasing 2012's acclaimed “Sedition”, which Decibel lauded as a“hyper-blasting, inhuman, machine-like attack”, Hour of Penance has annihilated fans worldwide with its fiery exuberance, playing well over 200 gigs alongside such acts as Behemoth, Skeletonwitch, Cannibal Corpse, The Black Dhalia Murder, Devildriver, Psycroptic, Deicide and Nile amongst others.