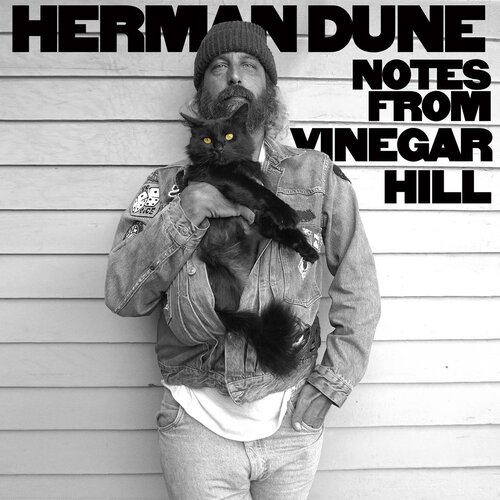 There’s a myth about California and, more specifically, Los Angeles that reaches far across the wire of popular culture – opportunity and prosperity, sunshine, movie stars. It’s here near the Port of Los Angeles and Vincent Thomas Bridge where French-born, Swedish descended David-Ivar ’Yaya’ Herman Dune finds himself like so many others before him, living in a lucid dream of Los Angeles. Quarantined in the sleepy San Pedro neighbourhood of Vinegar Hill, on the same harbour-adjacent street where Charles Bukowski lived out his final years, David-Ivar, visual artist and founding anchor of anti-folk stalwarts Herman Dune, turned those Covid-induced anxieties inward and emerged from his home studio with the new full length LP Notes From Vinegar Hill. There’s something for everyone on this record – folksy rockers, Bakersfield twang, Big Pink style Americana, 70s AM Gold and rough hewn Cold Turkey guitar stomps, all laced with an outsider’s sepia-toned version of California.

With a twenty-year career spent releasing records, touring the world with the likes of Arcade Fire, Of Montreal, Kimya Dawson, Wanda Jackson and Sleater-Kinney, showing at Art Basel and the Milan Trienniale, double-digit Peel Sessions and high profile festival appearances, a comic strip and limited edition toys, film soundtracking and even producing and curating his own festival in Paris, David-Ivar and his partner Mayon finally settled in San Pedro in 2015 where he launched Santa Cruz Records, his own imprint on which he has released his own music as well as multiple film soundtracks. He quickly fell into place in the Pedro community, making peach jam for his neighbours from his backyard harvests (dubbed Yaya’s Yum Yum Jam), contributing comics to the legendary local newspaper Random Lengths, and picking up a standing Saturday night gig at The Alhambra, a still rough and tumble dive that’s officially designated as the oldest continually operating bar in Los Angeles, dating back to 1904.

Though isolating in his home made a live backing band impossible for the recording sessions, this album is still very much a collaboration – while David-Ivar played guitar, piano, upright bass, drums, percussion, harmonica and whistles, he was able to enlist some far away friends to fill out the sound. Nashville’s Caitlin Rose came in with both sweet and haunting backing vocals that float throughout the album. Longtime friend and collaborator Jon Natchez (Arcade Fire, War On Drugs, David Byrne) provided those signature horn arrangements while prized Nashville guitar player Spencer Cullum III (Miranda Lambert) contributed pedal steel and Hawaiian slack guitar. Partner Mayon sings additional vocals and there are even some sampled purrs and whirrs from Santa Cruz Records’ own mascot and spokesperson, Inspecteur Morrison the Cat.

The songs on Notes From Vinegar Hill speak of the suffocating claustrophobia of isolation and fear, the anguish of being an immigrant in a country where policies harden by the moment, but also of the beauty of California, the ocean, and of life with three black cats that turned the heart of a Scorpio toward felines.

This album is dedicated to David Berman.