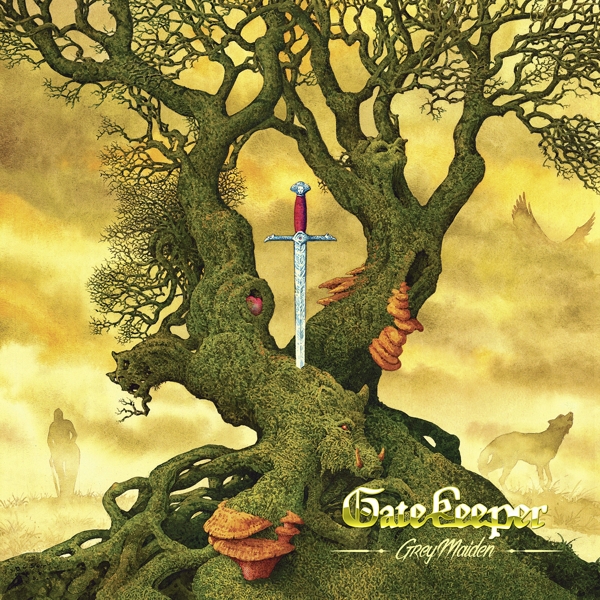 One of 2018’s true melodic metal breakout acts returns with sterling four-song EP. Hot off the heels of their acclaimed East of Sun debut, Canada’s Gatekeeper strike while the iron is hot with the Grey Maiden EP, featuring a scorching new cut, re-recording of an old favorite, acoustic song and cover of an obscure NWOBHM track.

The metal scene moves fast. Hundreds of releases are made available every month from new bands jockeying for position or veteran outfits doing their best to keep up with the times. It simply may no longer be feasible to release an album, support it with some shows, then disappear for two years only to do it all over again. Such is the line of thinking for Canada’s Gatekeeper, who return in 2019 with the four-song Grey Maiden EP.

The follow-up to their successful East of Sun full-length debut, Grey Maiden includes the brand-new title track and acoustic “Moss,” a re-recording of “Tale of Twins” from their first demo and a cover of “Richard III” by obscure NWOBHM outfit Tredegar. Gatekeeper — who consist of vocalist Jean-Pierre, guitarist/founding member Geoff Blackwell, lead guitarist Kenny Kroecher, bassist David Messier and drummer Tommy Tro — originally had the idea to record an EP after being asked by Skol Records to contribute to their NOWBHM compilation, Grandbreton Invasion. Figuring they were already going to be ensconced in the studio recording “Richard III,” Gatekeeper decided to waste no time in pulling the Grey Maiden EP together, providing their fans with an early 2019 treat.

The title track finds Gatekeeper at their melodic best, showcasing the band’s penchant for twin guitar harmonies as well as the impressive range of Jean-Pierre, who ably weaves between heavy, complex riffing. In fact, Jean-Pierre’s work on “Grey Maiden,” “Tale of Twins” and “Richard III,” showcase a vocalist now coming into his own, something that Blackwell attests to the pair’s deep well of ideas and constant flow of communication between the band’s home base of Vancouver and Jean-Pierre’s current locale of Portland, Oregon. Blackwell, the consummate riff and melody writer, JP, a vocalist who likes to think outside of the box, are often looking for unique rhythmic patterns to suit his versatile vocals.

The songwriting serve-and-volley between the two paid quick dividends on East of Sun and only gets better here, especially when Gatekeeper explores the challenging terrain of “Richard III.” In fact, the members of Gatekeeper are more apt to drop obscure metal references then they are to vouch for the scene’s more prominent bands. Blackwell considers it to be their “bread and butter,” born from the never-ending desire to find bands off the beaten path who could offer something new and vibrant to influence Gatekeeper’s sound.

This pursuit of individualism is one of Gatekeeper’s defining traits — they easily elude many of melodic and power metal’s stylistic trappings on both East of Sun and Grey Maiden. The new year will find Gatekeeper hitting Europe with labelmates Sanhedrin in addition to hunkering down with a brand-new batch of songs for an eventual sophomore full-length release. Grey Maiden is hardly a stopgap release, but another bold proclamation from a band who appears to be just getting started.