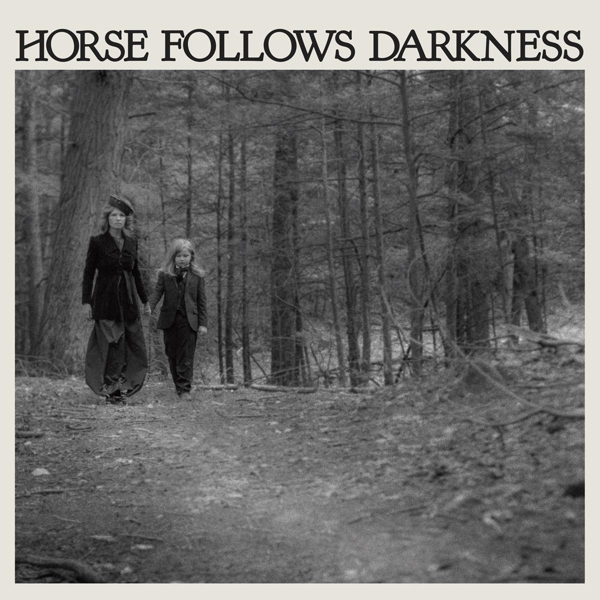 Horse Follows Darkness is the second record by Delia Gonzalez, her follow up to the album "In Remembrance". The title is taken from a werewolf genre film her 8 year old son Wolfgang had created. Horse Follows Darkness is essentially a modern electronic soundtrack for the Revisionist Western. Even the idea for the record cover is inspired by one of the most well known modern Westerns, Robert Altman's McCabe & Mrs Miller. The album was recorded with Abe Seiferth at Transmitter Park studios. Abe became an integral part of the recording, playing guitar and helping to suggest experimenting with different synthesizers, something Delia was keen to do. Delia refers to Abe as a "magical and incredibly intuitive collaborator" regarding the sound of the record. The music that emerged from these recording sessions combines a range of influences - from the compositions of Erik Satie to alon De Musique', the solo piano record by Su Tissue (of the L.A. punk band Suburban Lawns). The record also took on a much different shape and sound with the introduction of the Sequential Circuits Prophet VS, as well as a vintage Korg Poly synth and the Roland SH-101. The golden era Krautrock recordings of bands like Neu!, Cluster & Harmonia were touchstones as well, the repetition, swirling soundscapes and locked-in rhythm tracks. Delia Gonzalez is a Cuban-American musician and artist, based in both New York City & Berlin. Her disciplines include everything from composer to filmmaker, dancer / choreographer, sculptor, painter & performance artist. Her musical career with DFA Records began in 2004 when the label released the 12" single "Relevee", followed by the album of cosmic acid-house "The Days of Mars", with Delia and then musical partner Gavin Russom. In 2015, DFA released Delia's first solo album entitled "In Remembrance", which was a full piano score for a 30 minute filmed ballet, a perfect example of the type of work Delia creates as a multi-disciplinary artist. RYIL: Kaitlyn Aurelia Smith, Cluster, Erik Satie, Nils Frahm