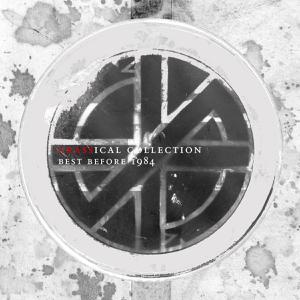 Crass were an English art collective and punk rock band formed in 1977 who promoted anarchism as a political ideology, a way of life and a resistance movement. Crass popularised the anarcho-punk movement of the punk subculture, advoca1ng direct action, animal rights, feminism, anti-fascism, and environmentalism.

The band used and advocated a DIY ethic approach to its albums, sound collages, leaflets, and films. Painstakingly remastered and redesigned over recent years by Penny Rimbaud and Gee Vaucher, the Crassical Collec1ons are a radical reappraisal of the Crass catalogue. The message remains the same, but with new visuals, improved sound and the added clarity of hindsight. Crass as it was in the beginning, but with all the power of now. Best Before 1984, number seven, is the one that almost got away.

This brand new and final Crassical Collection is a deluxe double CD package re-mastered by Alex Gordon and Penny Rimbaud at Abbey Road Studios in 2018. Contains the original album plus a further album's worth of related material; good, bad and indifferent. Half the band want it out while the other half wanted out, buy hey, here it is in all its glory. This deluxe release includes five fold-out posters and an illustrated 52 page booklet containing lyrics and contextual notes. There is also the added bonus of creating an enlarged Crass logo when owning the complete set.