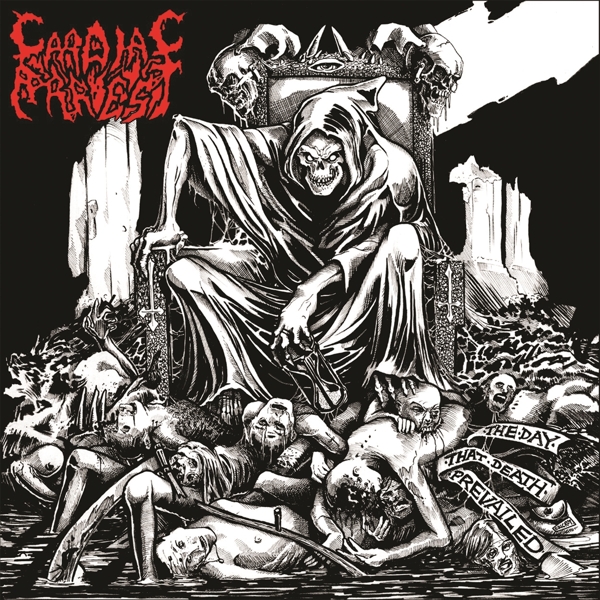 Relentlessly rotten death metal with an unearthly interest in all things absurd, morbid, and diseased. Formed in the bowels of Chicago in 1997, Cardiac Arrest have been carving out aural nightmares of death and grime for decades now. With an unearthly interest in all that's absurd, morbid, gruesome, and unhealthy, the band has consistently gotten heavier and viler with every album they spat out.

More than half a dozen albums deep into their 23-year career, Cardiac Arrest have again delivered a masterstroke that bands a third of their age would be jealous to release: The Day That Death Prevailed. Cardiac Arrest stick to their guns but come out with those guns fully blazing! Tastes may change, but these U. S. diehards continue to stay true to the iron-clad ethos of genuine, all-caps DEATH METAL; if anything, they get better with age.

Indeed, the title The Day That Death Prevailed is fitting, for their rigorously fine-tuned form of death metal squarely harkens to older, purer days - when true songwriting was valued most, and the disgusting chops to back it up. Cardiac Arrest do both here, gutsfucking the listener with a fiercely focused mix of headbanging gallops and well-timed bouts of blasting, creating a streamlined, shit-heavy steamroller that's as catchy as the clap. Hooks and grooves and generally memorable nastiness are sliced and sluiced across The Day That Death Prevailed with absolute ease.

But lest one think »catchy« means »soft«, think again: these Chicago miscreants are ever committed to horror in the most classic sense, just like aesthetic forebears Grave, Master, Benediction, Obituary, Cianide, Malevolent Creation, and of course, the Floridian masters Death and Massacre. This deep into their catalog, though, and it's about damn time Cardiac Arrest are included in the (un)hallowed ranks, right? With suitably stark cover art courtesy of Eric Rot and another crushing mastering job by Javier Felez at Moontower Studios, The Day That Death Prevailed once again proves that old age doesn't soften the diehard one bit - it just kicks them into Cardiac Arrest! Bonus Materials Metallic silver variant Lyrics insert Poster of cover art Sales Points

For fans of Master, Benediction, Grave, Death and Massacre