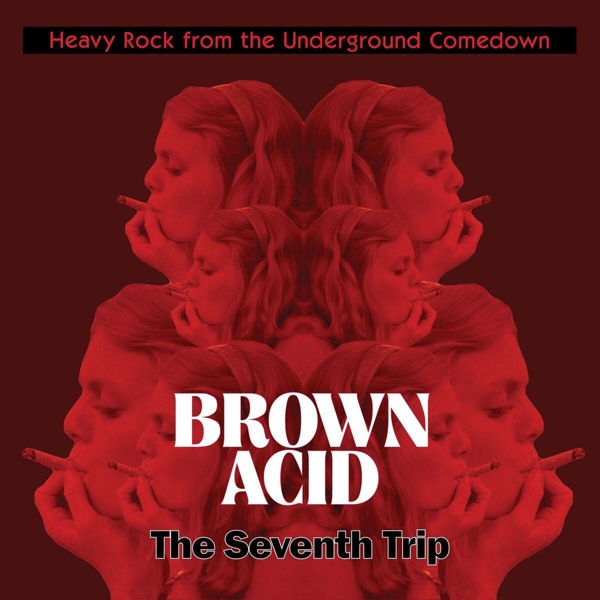 *First pressing COLORED VINYL ** Everybody's favorite source for the hard stuff is back in business, with ten more lethal doses of rare hard rock, heavy psych and proto-metal! Hard to believe we're eight Trips in and we haven't lost any steam since the get-go. As usual, we're laying the heaviness on you in the most legit way possible. These obscure tracks have all been licensed, the bands have been paid, and the sources are all analog.

The quality of tracks seems increase along with the number of Trips and this cohesive collection comes outta the gate with both guns blazing! Pegasus recorded one single in Baltimore in 1972 and they made it count. »The Sorcerer« is a throbbing ripper that prior to this was basically unknown. However, it doesn't seem too far fetched to speculate that Black Flag lifted the riff for »No Values« from this track eight years later.

Unlikely, but possible, especially considering how big a Black Sabbath fan Greg Ginn is. Pegasus was lauded back in the day for »how much they delivered that Black Sabbath feel.« You may read the track title for the Nobody's Children 45 and start thinking, OH NO, the guys behind Brown Acid have given up on bad trips.

Fret not, »Good Times« was originally written as a joke, but when Ron Chapman of the Sump'N Else TV show heard it he passed it along to the folks behind GPC records and they quickly pressed 100 copies. Unfortunately, the evening it was slated to be played on the local Dallas radio station KLIF, Robert Kennedy was murdered and premier was pre-empted by a Classical music tribute to him.

The song has since been bootlegged numerous times and even covered by the Butthole Surfers, but this is the first time it's been fully licensed. Youngstown, Ohio is the most commonly referred to city of the entire Brown Acid series.

This town of just under 150, 000 people may've had the highest (literally and figuratively) per capita output of heavy 45s. Blue Amber recorded this in 1971 at Gary Rhamy's analog Mecca, Peppermint Recording Studios.

This two-riff boneheaded banger sounds like a caveman protest song with an extraordinary amount of delay on the vocals. No wonder this 45 fetches three-figures on the rare occasion it comes up for sale. Batting clean-up, we have Negative Space, the only LP sourced track on this album.

This crunchy jam comes off the band's 1970 record entitled Hard, Heavy, Mean, & Evil. At over six and a half minutes, »The Calm After the Storm« is the longest track included on this volume, but it never gets dull. Fun fact: before changing the name to Negative Space, Rob Russen called his band Snow and released the »Sunflower« 45 in 1969 - you might recall that groover from the First Trip.

We generally stick with American artists for this series, but every now and again something foreign grabs us and shakes us to the core. One example is this Swedish 45 by Zane. These crazy Swedes did one incredibly damaged (hence the title) record on the MM label in 1976.

These proto-punkers relied heavily on synth for this tune and mixed the drums so obnoxiously loud, you might think the kit is in the room with you. This is a weird one that somehow sounds like Zolar X covering Wicked Lady. Brown Acid material all the way! B must be short for Bangers, ›cuz this Side is full of ‹em! The flip of this Trip begins with a virtually unknown Oklahoma record from 1973.

Blizzard was Rod McClure's high school band, but you couldn't possibly guess that teenagers recorded this heavy slab on the Token (should've been Toking) label. It's one of the best we've comped and it sounds like a hypothetical MC5 / Hendrix collaboration. The »Under the Ice« level drum fills will knock your socks off if the heavy shred doesn't first.

OOOOk-lahoma, where the wind comes sweepin' down the plain and apparently where the fuzz goes seepin' in your brain! Third World is the second Okie inclusion on this Trip and we couldn't be more stOOOOOked to be sharing this very obscure single with y'all. If the heavily distorted two-note riff doesn't grab ya, the apocalyptic Grand Funk vibes will.

Once they get their mitts on ya, Third World will take you back to 1971 and leave ya there. Can we hitch a ride too? Ever heard of Virginia, Minnesota? We hadn't either until we got in touch with Calvin Haluptzok and got the back story on his band Sweet Wine.

This bitchin' one-off 45 must've melted the snow off the roofs of the households brave enough to play it when it came out in 1970 and it's still red hot nearly 50 years later. This vino may be sugary, but it packs an incendiary punch! Sadly, Calvin passed before we could get his music re-released, but it was nice to have reached him before it was too late.

The Sweet Wine legacy lives on thanks to the Brown Acid archivists. C. T. Pilferhogg wins the award for most puzzling band name in our series. What's not puzzling is how righteous both sides of their self-released 1973 single are! Featured here is the A-side »You Haul« which is one of the best examples of a poor man's Deep Heep (Deep Purple meets Uriah Heep) we've ever heard and the demonic Echoplex-laden laughs mixed into this track are out of control.

The band was touted as »Southwest Virginia's Finest Boogie Band«, but don't let that fool ya. They could bang heads with the best of ›em. The closer on the Seventh Trip is one we hold very near and dear.

Not only is this record the one that's taken us the longest to secure the rights to, it's also one of the very best examples of heavy psych you'll ever hear. The track rings your bell (literally) straight out of the gate and the dank psychedelic vibes kick in immediately.

»The Darkness« was recorded in a basement studio in Kansas City in 1969 when the lead guitarist was only 16. The band was from a rural Missouri town, played only one impromptu gig in Clinton, and pressed only 125 copies of this, their only single.

It should come as no surprise that it sells for hundreds of dollars when it's offered. That's a small price to pay for such greatness