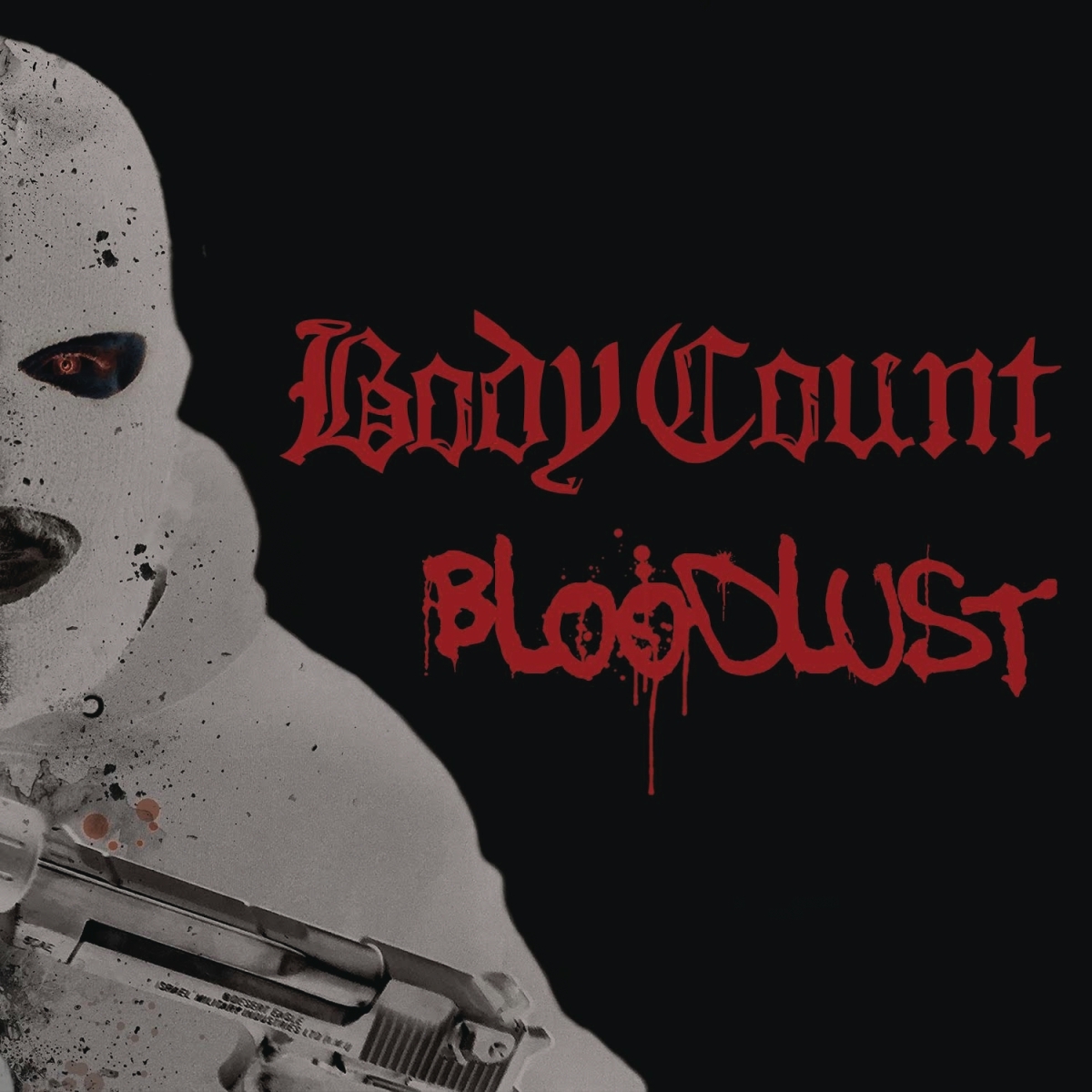 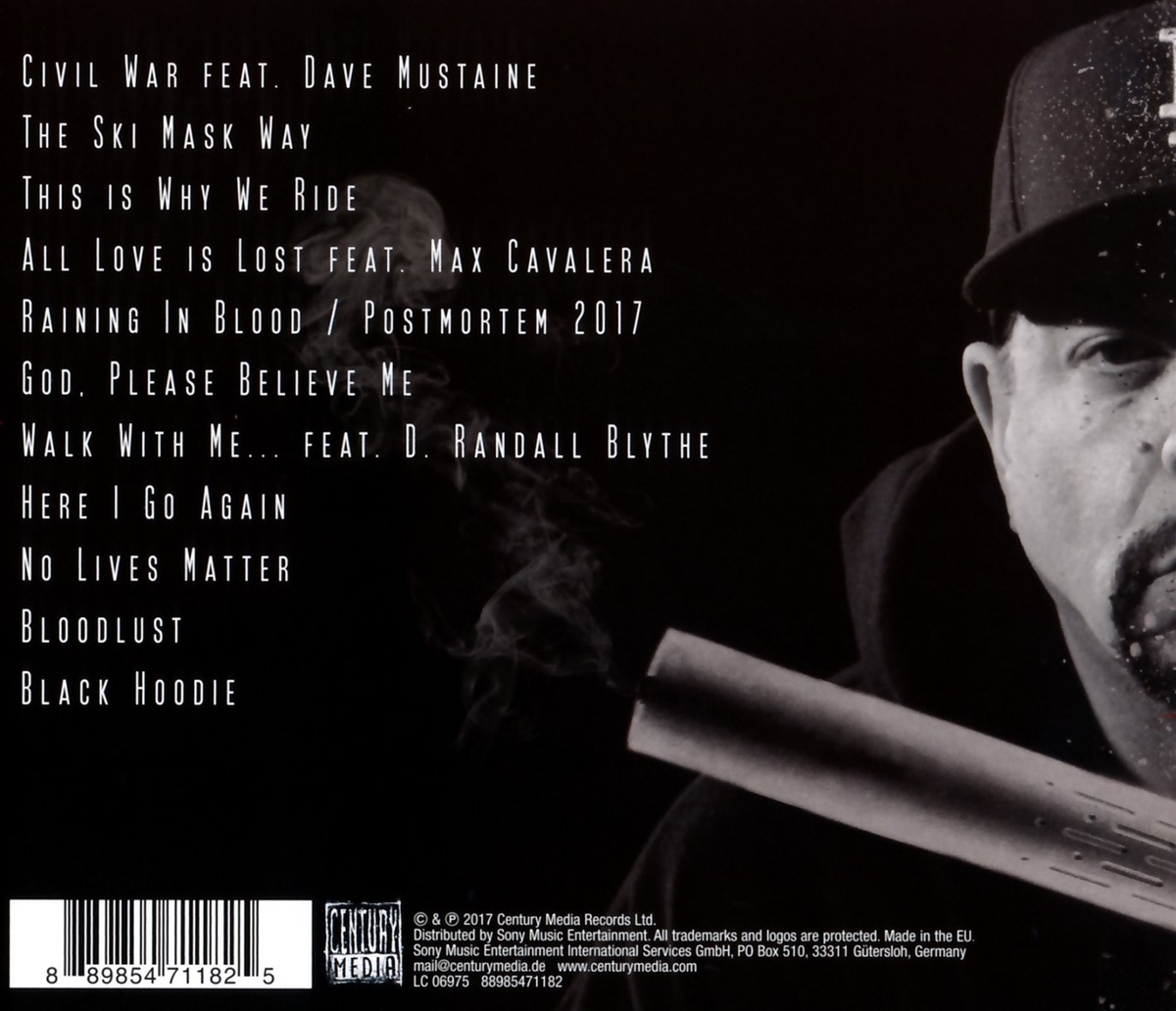 Well America, you’ve gone and done it now – you’ve awakened a sleeping giant. This isn’t your parents’ Ice-T, the mild-mannered star of television’s Law And Order: Special Victims Unit, who takes his charm to affable new heights while selling lemonade alongside precocious kids in a current Geico commercial. No, this is BODY COUNT, the gangster-metal collective that made music fearsome to mainstream America, their renegade track »Cop Killer« sending politicians, parents and law enforcement officials into a proverbial tailspin when it was released unto the world a quarter-century ago.

That’s not to say Ice-T and BODY COUNT have been silent over the past 25 years, but as Ice is quick to point out, you can’t start a movement if people aren’t willing to move. »Music happens in climates,« the BODY COUNT frontman says when asked about his expectations for the band’s new opus, the aptly titled BLOODLUST, a razor-sharp collection of social right hooks and body blows that paint a picture of an America in utter and complete shambles.

»Groups like Rage Against The Machine and Korn were born when the world was in turmoil, then music went into this delusional period where hip-hop became about nothing more than poppin’ bottles. Now we have impending doom again, racism is at an all-time high and it’s our season again. This is the optimal time for a BODY COUNT record – as an artist, you can be as pissed off as you want, but if the audience is dormant and care more about their chai lattes, well…« Ice breaks into laughter before he can finish the statement.

Nothing against $6 coffee drinks that pack more sugar and syrup than dark roasted caffeine, but our man is onto something. This isn’t about the elephant in the room or the donkeys sulking in the corner, it’s about a culture turned upside down and a people too distracted by fluff and filler to care about making a difference in their world. »The ‘60s was real music, and BODY COUNT was born into that - I’m going to tell you how I feel about shit, that’s who I am and who I will always be.

Now, in 2017, let’s see if people are really as pissed off as they act like they are. We’re dealing with a generation that has never known rage. They grew up on Obama, they’re soft today.« BODY COUNT were born of a day when hip-hop was the soundtrack of the streets, brought to life by Bloods, Cripps and gang bangers who lived and died by a code of street justice today’s reality stars and internet wannabes can’t begin to fathom. It wasn’t the sound of middle class American kids playing dress-up and feeling fashionable. And heavy metal? It wasn’t pretty and clean for mainstream America to swallow like a watered down shot with your favorite spray of sugary sweet soda as a chaser.

Metal was about long hair, middle fingers and a vocal indifference to societal norms. Maybe we can blame BODY COUNT for how far we’ve fallen – after they united metal and hip-hop like napalm, politicians took note and launched careers around warning labels and lyrical witch hunts. On BLOODLUST [Century Media], BODY COUNT deliver a colossus that will send Tipper Gore and the PMRC into flashback-driven seizures. It is stark mad and irate, a litany of lyrical missives that paint a four-dimensional picture of police brutality, racism and social inequality.

Tracks like »No Lives Matter,« »Black Hoodie« and album opener, »Civil War« featuring metal icon Dave Mustaine, pulse with a relevance and slam with a sense of urgency that’s been missing for far too long. »I may have an acting job to fall back on, but my core still looks out there and says that people are a bunch of pussies. What the fuck!?! I never had a hard time putting myself on the line, now I want people to stand up and open their eyes. People are dumb, they don’t know. The cops shoot kids and they say it’s white people – it ain’t white people, it’s the cops! Racism is real, but that’s not all that’s happening here. I’m singing to my white audience and letting them know that I see them as an ally, and I’m singing to my black audience and telling them to judge a devil by their deeds.«

White, black, blue or red, the songs on BLOODLUST are color-blind, eviscerating any lines that might separate Ice-T’s ›Original Gangster‹ roots, guitarist Ernie C’s searing metal guitar play, a who’s-who of guests that include Megadeth’s legendary Dave Mustaine on »Civil War,« Lamb Of God frontman Randy Blythe on »Walk With Me,« Sepultura/Soulfly icon Max Cavalera on »All Love Is Lost,« and even a hell-raising cover of Slayer’s classic »Raining Blood.« »I’m trying to lose that picture of the one-dimensional gangster,« Ice-T says of his expansive reach and bristling influence over popular culture. »Mother fuckers that act hard are the fakest mother fuckers in the world – us right now, this is how human beings really are. We can joke and talk shit, we can hit a political note and be adamant and angry as shit, then on the next note you can be watching cartoons and bouncing your kid on your knee. I’m not worried about people misinterpreting me anymore – the dummies misinterpret, and the real fans will assassinate them for that.

The intention here was to make some great music, open some eyes, and offer people some entertainment. People should rock to this – I didn’t want to make a mix tape, I wanted to make a BODY COUNT album.«
Let the movement begin.