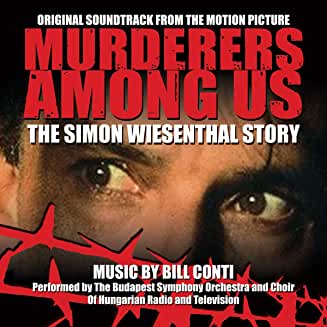 Made for HBO and broadcast in April, 1989, MURDERERS AMONG US is a biographical portrayal of the life of Simon Wiesenthal, the famous Nazi Hunter. After being liberated from Malthausen, an Austrian concentration camp in 1945, the film follows Wiesenthal as he agrees to work with the American War Crimes Unit to document the horrifying deeds of the Third Reich and to help apprehend the guilty men involved.

As he begins his work, he slowly pieces his own life together. Wiesenthal is reunited with his wife, whom he had believed was dead. In Vienna, he opens a documentation center but his increasing devotion to hunting down the architects of the Holocaust begins to take a toll on his personal life. The film also follows his rise to become one of the leading Nazi hunters in the world, eventually bringing such war criminals to justice as Adolf Eichmann and Klaus Barbee.

The music for MURDERERS AMONG US is composed by Bill Conti, performed by the Hungarian State Opera Orchestra and Chorus, conducted by the great Harry Rabinowitz. Previously released on compact disc by Bay Cities Records in the early 1990s and presented in the form of two lengthy suites, BSX Records now presents MURDERERS AMONG US in its entirety, including 25 minutes of previously unreleased music, newly remastered by Digital Outland.