Within Temptation: The Q-Music Sessions 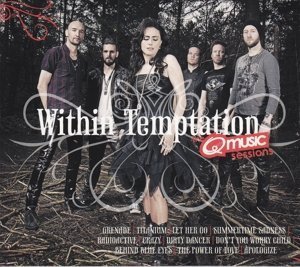 In the run up to the 15th anniversary of Within Temptation in the sold-out Sportpaleis in Antwerp, the band was asked by Q-Music to choose and perform an existing track in a ‘Within Temptation-fashion’ on a weekly basis. The band accepted this challenge enthusiastically that resulted in reworks of hits by David Guetta, Passenger, Lana Del Rey and Bruno Mars amongst others. The feedback on these covers by the fans and listeners of Q-Music was extremely positive, which made the band decide to release a selection of the covers on an album.

Front-lady Sharon Den Adel: “Our approach was to really make the cover a new Within Temptation song. So not going the easy way by using only a piano or an acoustic guitar for example, but really trying to put all the elements of a Within Temptation track in this new version. It was quite a challenge because we had only one week to get it right, while recording an original Within Temptation song can sometimes takes up half a year! But this pressure also gave us an creative boost and it was very rewarding to get it done in time each week. Also, we learned a lot from the in-depth analysis we needed to make on these hits, written by others, in combination with implementing our own sound and style in each new cover. We are glad that we’ve taken up this challenge.’’

Within Temptation
An Acoustic Night At The Theatre
CD
EUR 7,99*
alle anzeigen