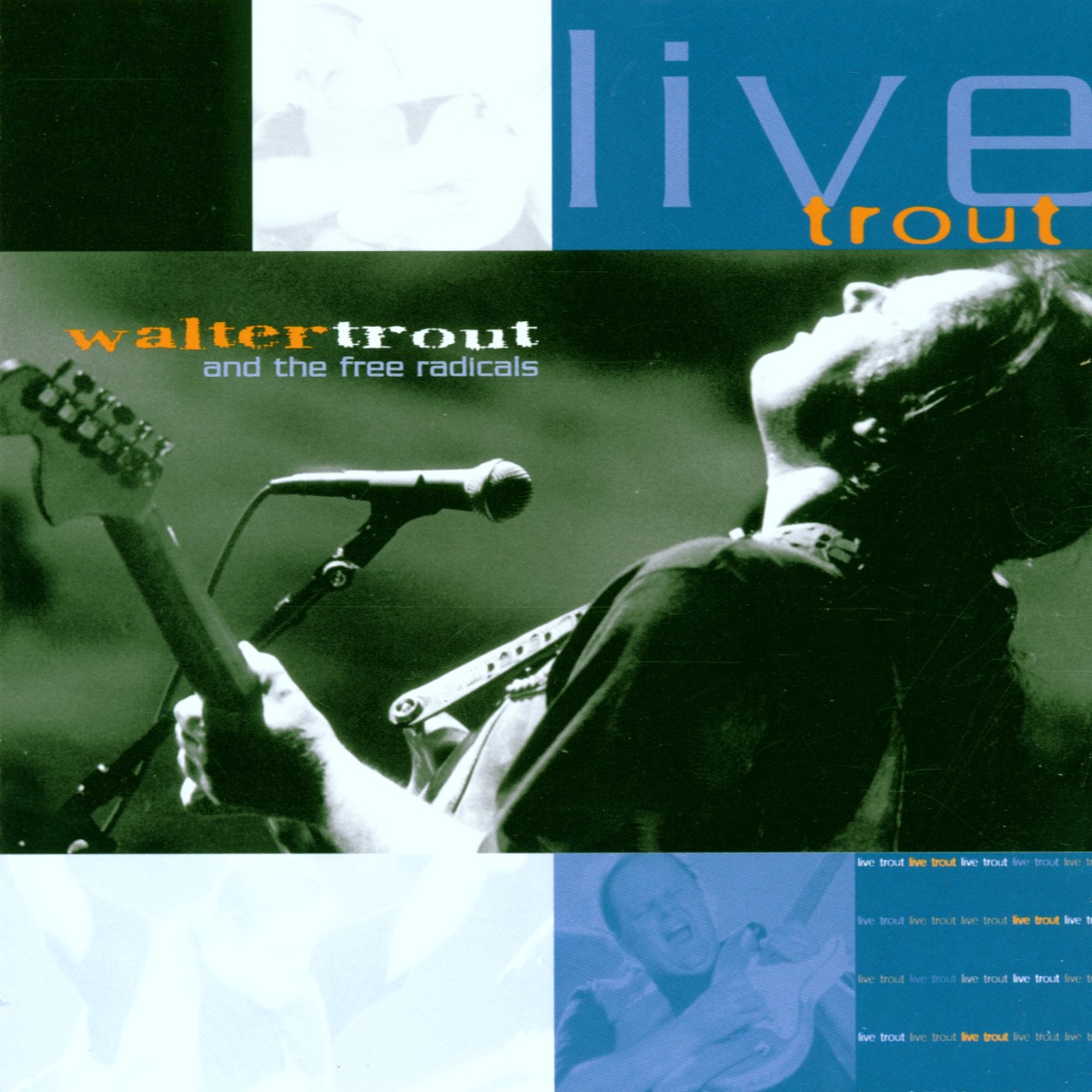 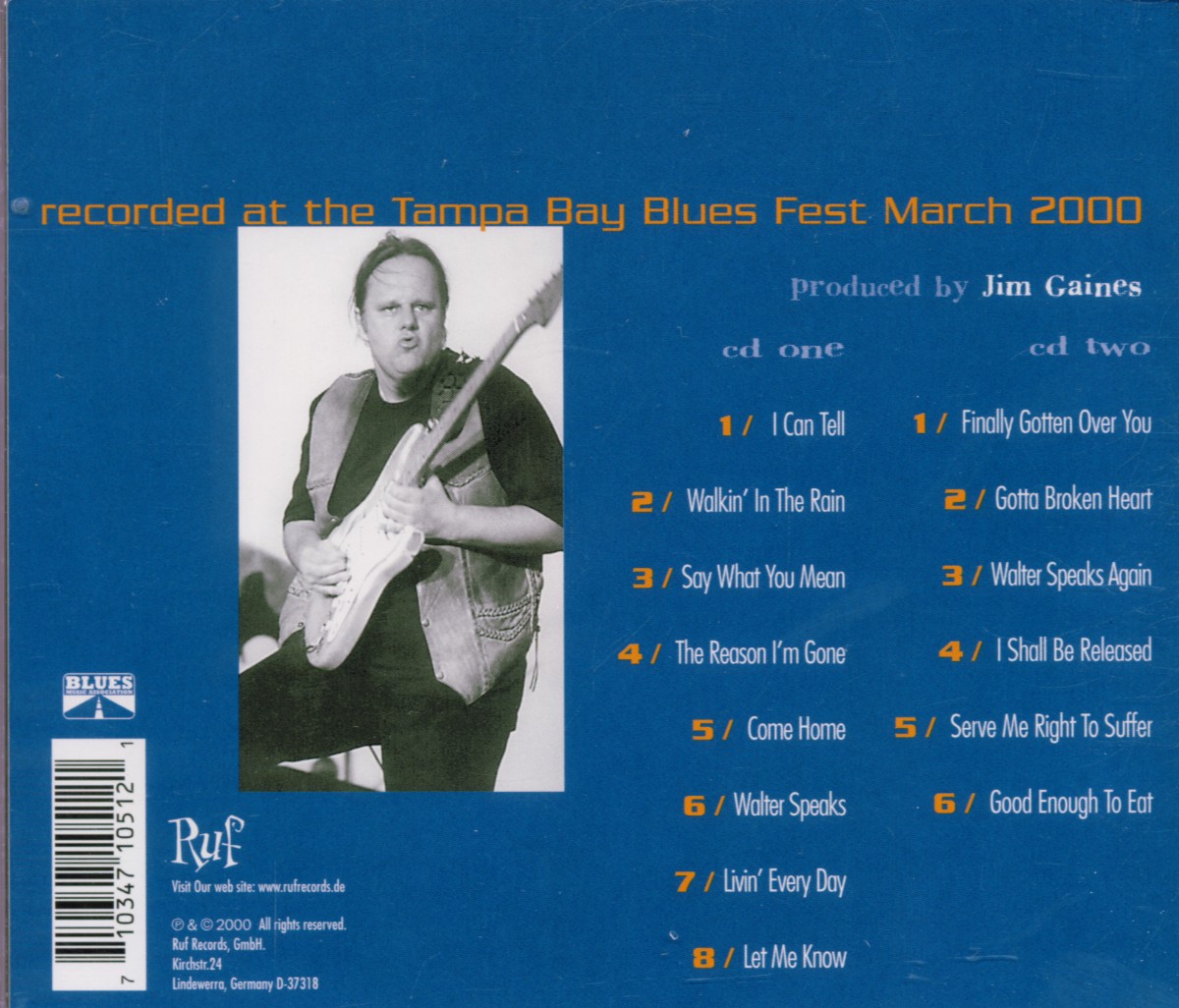 No one warned me what to expect when I sat through my first Walter Trout live show. From the first notes, I couldn't take my eyes off his fingers for fear I'd miss some wizardry. I found myself hypnotized by round after round of machine gunned notes fired off from the hip at a rate that makes the speed of light seem slow. Blues purists be damned, this guy attacked the electric guitar the way it always meant to be played. Even breathing became difficult. This was the effect of a Walter Trout live experience.

Often before an intense performer like Trout can lose this spontaneous edge on a studio recording. So, Trout felt compelled to capture a live recording of his performance on March 26, 2000, at Tampa Bay Blues Festival. A mobile studio was driven from Orlando, parked backstage and wired into the sound system. The mobile studio was set up to record 32 separate tracks. Each instrument and Trout's vocals were mic'd. Additional microphones were placed throughout the audience. Producer Jim Gaines and sound engineer George Cowan were flown in from Memphis.

But this performance almost didn't happen. At one point on disc two, Walter says to the crowd, "I didn't think I was gonna make it, but I'm now feeling good." The crowd cheers as they do whenever a performer says that. But the people in the audience had no idea how close to the truth that was:

Twenty-four hours before this show, Trout was singin' the airline connection blues. With his flight from LA delayed, Trout, his wife and children, and tour manager missed their connecting flights in Phoenix. After 24 hours of waiting in lines, eating nothing but airline peanuts and pretzels and surviving rerouting insomnia, Trout arrived at 8: 00 a. m. in Tampa only to find his room was given away. He didn't settle into a hotel room until a few hours before the show still without food or sleep.

"Two hours before we went on, I was in a restaurant trying to eat and I literally broke down," said Trout. "I had never felt that bad from travelling. I put my head on the table and started sobbing loudly. In 11 years of touring with my own band, I can count on one hand the number of gigs I've ever cancelled, but I was ready to cancel the show. I told my wife that I can't go out and play, I just felt too weak. I was scared not to have the physical ability to pull it off. I could barely stand up and my body would not accept any food. It had been more than 24 hours since I last ate or slept. I was nauseated and completely without strength. To face an audience in such a condition, not to mention people from the industry who can make or brake your career, is an experience wish on nobody. When my wife reminded me of all the people who were in the audience waiting, I knew I had to somehow suck it up and go on." The stress Walter felt was almost too much to bear. As a performer on the way up in the United States after a solo career in Europe for more than 10 years, and before that 20 years as a sideman this is a man who does not believe in low-energy shows. Walter knew that not only was this performance to be recorded and a lot of people from the press, agents and record company people had flown out to see what this "Trout" was all about. But most importantly there was an enthusiastic audience who had paid to see a good show. The last thing Walter Trout wanted to do was a disappoint.

Other performers in this situation might have turned to drugs or alcohol to pull through a similar situation. Walter Trout went to his room and prayed. After forcing a couple of bananas and a few springrolls a shower and some more prayers... Walter went on stage.

His wife Marie remembered that moment. "It was a very tense moment, but I remember giggling as how this exemplified the roller coaster ride we're always on. After all the doubt and the tension, the physical exhaustion, the man gets up on stage and smokes."

When Michael Jordan gets the flu and a 102 temperature, he goes out and scores 50 points. And when exhaustion hits Walter Trout, he allows the energy of the audience to push his playing to extremes.

"Thank God there was a great audience. They gave me the strength and energy to pull it through. This is pure adrenaline. You can hear that I'm floating on the crowd, and they are lifting me through."

With all the live recording variables, most performers use the safety net of recording multiple nights and piecing together the best songs over an extended period of time. Not Trout. He knows that every night he taps into this unique invigorating energy, and each show is a combination of emotion and dynamics that make a whole. So sit tight for the ride. Trout told me that his performance merely reflects his inner moods. Therapy he calls it. If that's true, then the enjoy of going on in the face of his incredible adversity and pulling it off is Trout at his best. There is a delirious ebb and flow built throughout every solo.

Flailing up and down the fret board with the speed of a comet, Trout makes his guitar beg, plead, moan, yell, laugh, cry, coo, and whisper. He's every guitar head's dream come true. Through it all Trout's mesmerizing energy flies off the CD and Trout's band of Free Radicals prove song after song why they are one of the top blues rockin' bands in the world. "I was truly livin' the blues on this performance. It may not have been my best most precise playing, but the rough time I was having gave the performance the raw edge," said Trout. "Though I can play more precise than here, these songs have the emotional edge that I don't always achieve."

If a live CD is successful when it makes listeners yearn to have been present, then I'm sure wishin' I'd called sick and travelled to Tampa. Remember you heard it here: Do not sit home when Walter Trout plays in your city! (Art Tipaldi, senior writer for Blues Revue Magazine)

Walter Trout
We're All In This Together
CD
EUR 16,99*
alle anzeigen