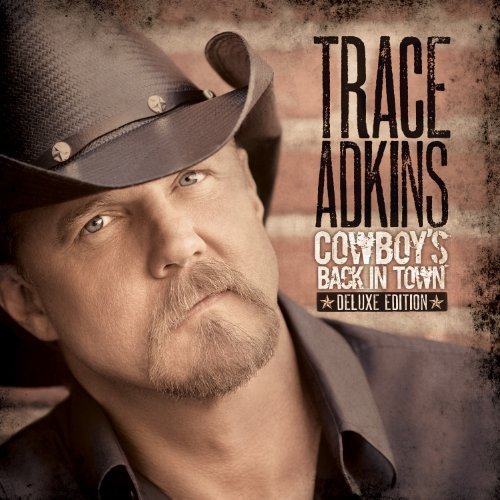 -20%
Trace Adkins
X
EUR 14,99**
CD
EUR 11,99*
Trace Adkins continues to conquer new worlds. He has long been country music's alpha male, a man whose commanding presence and once-in-a-generation baritone have made him a pillar of the contemporary Nashville sound. But such are his other gifts-a restless intellect, wide-ranging interests, great ability as a communicator-that it was perhaps inevitable that his influence would spread well beyond the bounds of the genre.

In the past decade, Trace has made his mark as an actor, both on television and in the movies, an author, a voiceover artist and commercial spokesman, a social commentator, and a reality show participant. His effect on businessman and showman Donald Trump was such that after his initial and highly successful appearance on Celebrity Apprentice, he was invited back as a boardroom advisor. He has turned his entertainingly articulated views into a well-received book, A Personal Stand: Observations and Opinions from a Freethinking Roughneck, and has even inspired an action comic book series, Luke McBain, that has proven to be one of the genre's hottest sellers.

"I guess it's that I'm not afraid to get outside my comfort zone and try new things," he says, adding, "I never do them just for what I consider the commercial value. I choose things I enjoy doing."

The obvious relish Trace brings to everything from talk show appearances to movie roles has made him one of the most widely visible of country's top-tier entertainers, and provides just the right counterpoint to the bottom line-his growing reputation as one of country's all-time greats.

The breadth and depth of his catalog points to the diversity and complexity of his musical approach and of his personality. He is the man who gave us one of modern-day country's rowdiest classics, "Honky Tonk Badonkadonk," and one of its most touching, "You're Gonna Miss This," which earned two of his four Grammy nominations, became his third chart-topping hit, and was named the ACM's Single of the Year. He is equally convincing across a musical spectrum that stretches from "Hot Mama" to "Songs About Me," from "(This Ain't No) Thinkin' Thing" to "Then They Do."

With the release of his latest, Cowboy's Back In Town, Trace launches a new chapter in one of the genre's most storied careers. Musically, he shows himself to be at the top of his game. The mix is classic Trace, with "Still Love You" serving as the anchor of the tender side, bringing that national treasure of a voice to bear on a declaration of eternal love in a first-rate meeting of sound and sentiment. On the other side, songs like "I Can Do That" and "Hold My Beer" find Trace bringing to life good-old-boy tales about the entertainment world and weddings, respectively. In fact, if the album leans in one direction, it would be toward that rowdy side.

"This is an album that has a smile on it," says Trace's friend, touring partner, and now label mate and label owner, Toby Keith. Their partnership took root during last year's "America's Toughest Tour," which saw the pair barnstorm through 29 cities, renewing their friendship and gaining fresh appreciation for each other's musical approaches. When Toby's Show Dog label merged with Universal Music, Trace expressed interest and Toby eagerly asked him to come aboard.

"This label is about getting the job done," says Trace, "but it's also about having fun in the process, and that's why we get into music in the first place." It was a natural step for Trace and Toby to continue touring together.

"We come from very similar backgrounds," says Trace. "We both worked in the oil fields and we played a lot of the same clubs on the Southwest circuit. We're both pretty independent and don't mind speaking our minds, and there seems to be a lot of crossover among our fans. It's good for everybody and it just adds to the excitement around this whole new chapter in my professional life."

That sense of excitement is certainly reflected in the work Trace has done with producers Michael Knox and Kenny Beard, drawing on songs from writers who have penned many of his hits-Casey Beathard, Tony Lane and Beard, among others. Lane, Marcel, and David Lee provided the CD's first single, "This Ain't No Love Song."

"I've always been a huge Tony Lane fan," says Trace. "I've cut a half dozen or so of his songs over my career. This song is just so cleverly written, about a guy trying to convince a girl the song is not about her when she and he knows it is but he's not going to admit it. It was a no-brainer."

Trace himself wrote the title track with Beard and another good friend, Jeff Bates.

"They were on the bus with me and we pulled up to a fairground in Iowa and I looked out and realized I had been there before.'Cowboy's back in town,' I said, and we started writing it and finished it that night. I remember we did the work tape going down the highway in the front lounge of the bus."

In addition to the traditional CD release, Cowboy's Back In Town is being released in a deluxe version featuring four additional tracks, offering Trace's fans the opportunity to dig even deeper into his music.

"Cowboy's Back in Town feels like a definitive Trace Adkins album. It takes all of his musical strengths and plays them at full force without trying too hard. When he rocks out, it feels more organic and fun than he's ever sounded before. The mid-tempos and ballads give the entire project a nearly-perfect level of balance in both sound and quality. With "This Ain't No Love Song" sneaking its way up the charts, Trace may be on the verge of a new and exciting leg of his career. At the very least, it sounds like he's made one of the best albums of his career." (roughstock. com)

"On this first album on Toby Keith’s label, Trace Adkins ramps up the redneck bravado and testosterone-filled swagger with Cowboy’s Back In Town. While each of Adkins previous albums have had some rockier moments (ala “HonkyTonkBadonkadonk” or “Chrome”), this one is decidedly more edgy and rockier." (thatnashvillesound. com)