Thermals: The Body The Blood The Machine 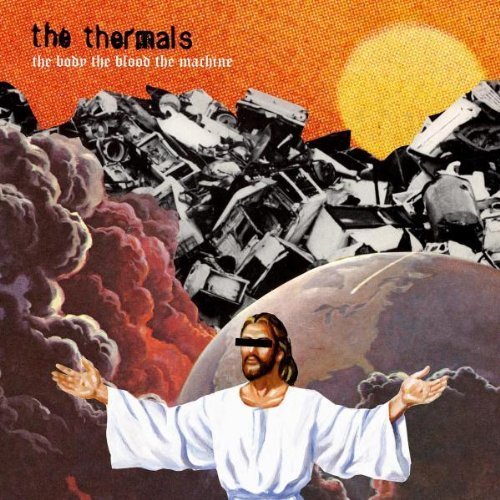 Bewertung:
lieferbar innerhalb 1-2 Wochen
(soweit verfügbar beim Lieferanten)
-27%
EUR 17,99**
EUR 12,99*
Versandkosten
The Body, The Blood, The Machine was recorded at Supernatural Sound Studios in Oregon City, twenty miles south of The Thermals' home in Portland, OR by Fugazi's Brendan Canty. With the unfortunate departure of original Thermals drummer Jordan Hudson in late 2005, Kathy Foster and Hutch Harris (bass and guitar / vocals, respectively) split up duties on the new record themselves with Foster pulling double shifts as The Thermals' rhythm section for almost the entire record while Harris sang, performed all the guitar tracks and some of the bass tracks, and the two shared keyboard / organ duties. With a wider, brighter, and wilder sound than anything The Thermals have done in the past, The Body, The Blood, The Machine adds walls of guitars, organs, and even a few "ballads" (aka slightly pretty songs) to the mix, while still retaining the gritty post-pop-punk sound for which The Thermals are globally famous. The lyrics envision a United States governed by a fascist Christian state, and focus on the need (and means) to escape. While hardly a concept album, there is definitely a story told in the songs: a story about getting the fuck OUT while you still can. With the recent addition of local drummer extraordinaire, Caitlin Love, The Thermals will be touring extensively with the release of The Body, The Blood, The Machine. [DUT]1. Here's Your Future 2. I Might Need to Kill You 3. An Ear For Baby 4. A Pillar of Salt 5. Returning to the Fold 6. Test Pattern 7. St. Rosa and the Swallows 8. Back to the Sea 9. Power Doesn't Run on Nothing 10. I Hold the Sound