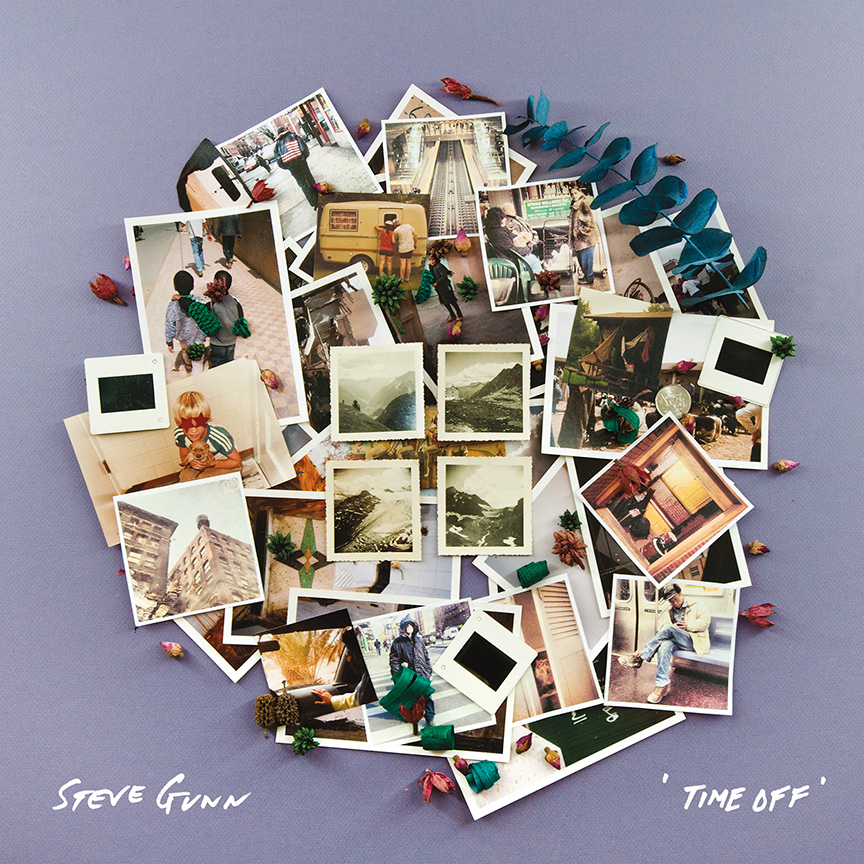 In the city we're all angling for Quittin' Time, laboring along and among the hours, searching and scheming for the sweet sound of those two easy words: Time Off. It's something you take-or sometimes steal, like a thief or a baserunner-but seems you can never get enough of it. It's regulated, rationed, and billed by volume, like water or electricity or ice cream. Sometimes you have to beg the boss for more, or even for a trifling taste. So let's make time! Let's roll the dice and get these old bones out on the road again. Steve Gunn's new album imagines the fugitive moments afforded us during time off, out, and away as occasions for dilatory investigations into our immediate environments and interiors. Time Off (PoB-08) showcases the virtuosic guitarist and songwriter's oblique character sketches and story-songs, some of which, like "Lurker" and "Street Keeper," portray specific denizens of his Brooklyn neighborhood. "Old Strange" celebrates Jack Rose, a dear and departed friend and muse.

Those contemplative studies frame Gunn's most affecting, accessible and articulate work of pure songcraft to date. His definitive statement as a songwriter, Time Off represents the culmination of nearly fifteen years of stylistic experimentation as a solo artist, a member of GHQ and the Gunn-Truscinski Duo, and more recently, as a guitarist in fellow Philadelphia-bred troubadour Kurt Vile's touring band the Violators. Gunn's first eponymous album with a full band, Time Off harnesses a core trio format to launch his compositions into new, luminous strata; the songs have evolved through disciplined trio interplay with longtime collaborator John Truscinski on drums and Justin Tripp (formerly of Aspera and Favourite Sons) on bass and guitar. Helena Espvall (Espers) also guests on cello. Steve's keen baritone voice features more prominently than ever before on these tunes, each of which feels both more rigorous and expansive than previous efforts. Here, Gunn the guitarist masterfully deploys the discursive, deconstructed blues style, at once transcendent and methodical, that has become his signature. Close listening reveals the influence of Delta and Piedmont country blues, ecstatic free jazz, and psych, as well as Gnawa and Carnatic music, on the continually unfolding compositions.

The fresh emphasis on narrative, characters in counterpoint, and those heavy-duty vocals likewise recall the finest work of Steve's friend and sometime touring partner, Michael Chapman. Building on his established penchant for charting musical travelogues that ramble through city and wilderness alike, these dispatches about home are not merely descriptive but corporeal. Gunn's evocative writing and ductile instrumental phrasing, buttressed by the band's intuitive playing, carries the listener along bodily for the "Trailways Ramble." It's a real collection of foot-tappers and head-nodders, perfect for summer sessions. The album opens with the sublime, meditative "Water Wheel"-a paean to "the water wheel's constant turn / open views and days to burn"- and indeed Time Off sounds as if Steve has swum full circle to reach the headwaters of his musical practice. This is Gunn at the top of his game, utterly unique but steeped in traditions both vernacular and avant-garde. Jump in.

Steve Gunn
The Unseen In Between
CD
EUR 13,99*
alle anzeigen