Sandy Posey: A Single Girl - The Very Best Of The MGM Recordings 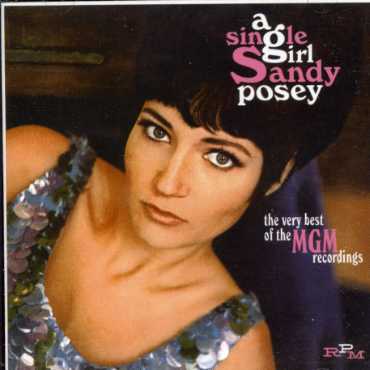 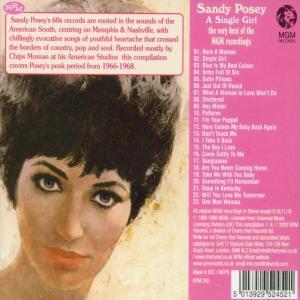 Nur noch 1 Stück am Lager. Danach versandfertig innerhalb 1-2 Wochen (soweit verfügbar beim Lieferanten)
EUR 15,99*
Versandkosten
Sandy Posey, brought up in the music rich area of Memphis, was a backing singer for the Nashville Studios. Singers she backed on record included Elvis Presley, Tommy Roe, Bobby Bare, Joe Tex, Percy Sledge and Skeeter Davis, and later in spite of her own success she continued to contribute her voice as part of the famous Nashville Sound background. Nashville publisher Gary Walker and writer producer Chips Moman wondered how she would sound solo so brought her into the studio in 1966 to record as the main artist. She scored five Top 40 single hits and released four albums all on the MGM label between 1966 - 1968. We present the very best of these recordings, nearly all produced by Chips Moman.

Great melodic and rhythmic 60's pop, reminiscent of the girl-talk records of the early 60's, innocent and submissive, with splashes of Posey's country music background which at the time brought her widespread radio and jukebox play. Although many of the songs were written by others Posey's strength was her song styling.

Packaging includes an essay written by Record Collector editor Peter Doggett, based around his recent interview with Sandy Posey. This package will find many takers among 60's pop fans as there have been very few collections of Posey's recordings down the years. Added to which is the cross over appeal to country fans.