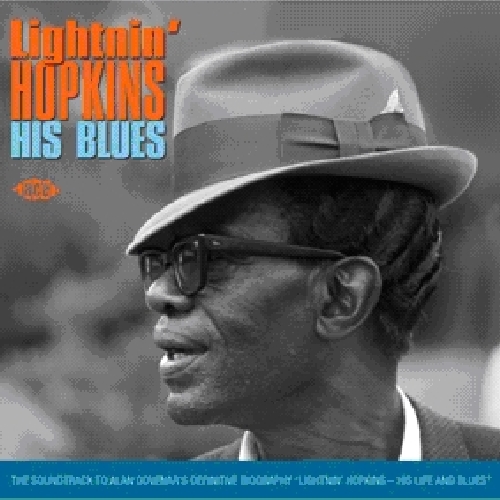 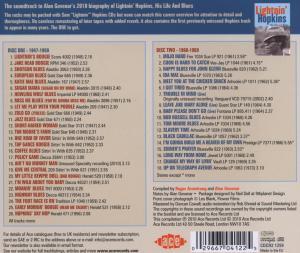 Bewertung:
lieferbar innerhalb einer Woche
(soweit verfügbar beim Lieferanten)
EUR 18,99*
Verlängerter Rückgabezeitraum bis 31. Januar 2022
Alle zur Rückgabe berechtigten Produkte, die zwischen dem 1. bis 31. Dezember 2021 gekauft wurden, können bis zum 31. Januar 2022 zurückgegeben werden.
Versandkosten
Sam “Lightnin’” Hopkins’ career stretched across five decades and some 40 plus labels, not counting subsidiaries, though he seemed to settle for long periods with particular producers, burning out many along the way. When the 34 year-old Sam Hopkins entered Radio Recorders Studio in November of 1946 he probably had no idea of that it would lead to a new identity that would stay with him throughout his life. He had been paired with pianist Wilson Smith and the duo were dubbed Thunder & Lightning by producer Eddie Mesner and the soubriquet stuck to Hopkins . Thunder’s recording career clapped out in around 1948.

For a couple of years he flipped from Los Angeles’ Aladdin label to Bill Quinn’s Gold Star Records out of Houston before producer Bob Shad took over cutting sides for his own Sittin’ In With and his employers Mercury and Decca. Sessions for Bob Tanner’s Houston-based TNT and a spell at Herald Records in new York drew a continuous eight-year run of recording to an end in the mid-50s.

After a brief hiatus, the folk / revival scene of the late 50s and early 60s took Lightnin’ on board and put an acoustic guitar in his hands. At 47 Lightnin’ was “authentic” and was soon hanging with the folk glitterati and earning well off his live performances. The jazz label Prestige picked him up for their Bluesville imprint and cut 10 LPs with him, with the odd side trip to other outlets, including Bobby Robinson’s Fire label for some raucous rockin’ blues. At the same time he found a second home with producer Chris Strachwitz at Arhoolie, producing some of his finest 60s sides there.

He was a highlight of the American Folk Blues Festival in 1964 making some of his best live recordings around this time. His useful recording career ended with the 60s and for the rest of his working life he toured comprehensively from New York’s Carnegie Hall to Rotterdam to Tokyo and back to Houston, Texas, his adopted home.

Lightnin’ Hopkins had a mixture of styles and much of his work, even later in his career, harked back to a down home blues style from the pre-war era that he had lived through (although he didn’t record at the time). Apart from the more usual lost love and wig wearing subject matter, he also wrote movingly about the time of slavery and the wrongs committed by both white and black people. At times he also acted like a calypsonian, recording bulletins on the news of the day, sometimes literally. He could also boogie with the best if them.

Well, you might say, that’s all very well but does the world need another Lightnin’ Hopkins record? Obviously we think it does, when it is the first proper career overview, and acts as a companion piece to Alan Govenar’s inestimable biography His Life and Blues. Also gone are the Aladdin and Sittin’ in With sides swamped in reverb for later LP release and used by the ooc merchants. But then what do you expect from them. Read the book, enjoy the record.

Sam Lightnin' Hopkins
Walkin' This Road By Myself
CD
EUR 6,99*