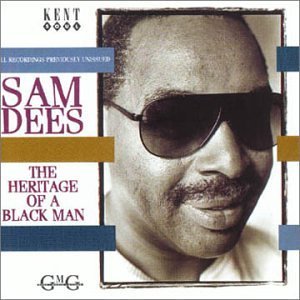 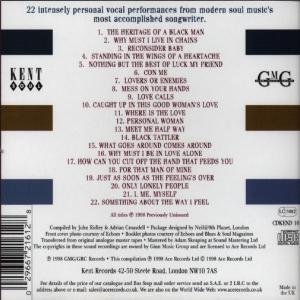 Bewertung:
lieferbar innerhalb einer Woche
(soweit verfügbar beim Lieferanten)
EUR 15,99**
EUR 14,99*
Versandkosten
Last year Kent issued SECOND TO NONE (CDKEND 125), Sam Dees' first CD in Europe, to widespread acclaim. Many listeners, unfamiliar with this soul giant, were astonished at the quality of his song-writing and the almost frightening intensity of his singing. The CD appeared in many Top 10s of the year.

This second set of material is from the same source and period - the early 70s - when Dees was at his creative peak, writing lyrics and melodies that reached the deepest of emotions. As on the previous CD, many of these numbers appear here in unfinished form, but the sparse accompaniment only provide greater emphasis on Sam's extraordinarily soulful vocals.

One of the most interesting aspects of this collection is the inclusion of a couple of tracks cut around the same time as Dees was recording his legendary Atlantic LP THE SHOW MUST GO ON. These tracks, Heritage of a Black Man and Why Must I Live In Chains, are amongst the most personal on the CD as they focus on Sam's passionate social and racial concerns. Despite his own recordings, Sam made his living as a jobbing songwriter, and a great joy here is Sam's sheer versatility of output. Only Lonely People for example, is aimed at a group like the Chi-Lites while Reconsider Baby is much harder-edged, no doubt penned for an artist like Johnny Taylor.

The level of much of the material here is astonishingly high. No wonder so many of the songs found their way onto vinyl. The hauntingly delicate Love Calls was beautifully realised by the Tavares, and another marvellous ballad Just As Soon As The Feeling's Over was cut by Margie Joseph. Other songs were picked up for recording by such stars as Ted Taylor, Ben E King and Southern soul hero Bobby Patterson. But the best of them is undoubtedly Mess On Your Hands - which Millie Jackson turned into one of her lengthy showpiece workouts, but which sounds so much better here, in all of its stark simplicity.

Sam Dees is still active in the music business, writing his exquisite songs and singing them in his unique way. Long may he continue. But many fans believe he was at his best cutting these numbers in Birmingham, Alabama and Atlanta, Georgia, and we're fortunate that even after this CD there are a few golden nuggets still to reach the surface from that motherlode. Watch out for Various Artists CDs in this series!

Great artists have covered his material over the years, but no matter how skilled a singer might be there's simply no substitute for a Dees song interpreted by the author. Sheer class!