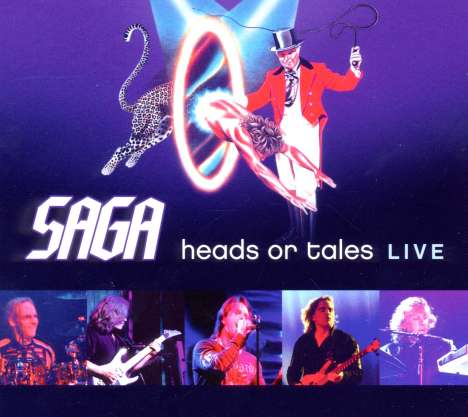 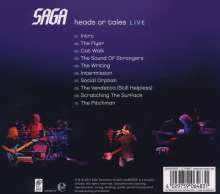 SAGA started off in the northern state of Ontario, Canada and released their fi rst self-titled debut album “Saga” in 1978. Their first album became a solid success in Canada, yet went big in Germany and with hits like ‘How Long?’, ‘Humble Stance’ and ‘The Perfectionist’ they got noticed all over the world for their original mix of progressive rock, pop and classic rock. Gaining more fame throughout the years, thanks to great songwriting and musicianship, they broke into the Canadian Top 40 with the singles ‘Wind Him Up’ and ‘On The Loose’ (peaking at #26 on the American Billboard Charts) in 1983 though these songs origin from the 1981 album “Worlds Apart”. With their 5th studio album “Heads Or Tales” released 1983, they skyrocketed with the lead single ‘The Flyer’, peaking at #79 in the US Billboard Charts, following with ‘Scratching The Surface’ as a second hit single from the album. With this album they became one of the “big names” for fans of bands like Rush or YES as well for all classic rock fans as their popularity in Europe grows album after album.

“Heads or Tales” is considered one of their greatest works, with the 1983 SAGA including: Michael Sadler (lead vocals, guitar and bass), Ian Crichton (guitar), Steve Negus (drums), Jim “Daryl” Gilmour (keyboards, backing vocals and clarinet) and Jim Crichton (bass, keyboards and guitar). In 2008, Sadler left the band being replaced by the excellent voice of Rob Moratti, who toured, recorded with them and in 2009 released one studio CD (“The Human Condition”). SAGA have successfully toured during 2009 and 2010 all over Europe and have announced the return of Michael Sadler (new album scheduled on earMUSIC for September 2011). Selling an impressive more than 8 million albums, they continue to surprise their fans and are planning a lot more. Be sure to experience all of the hits live and celebrate the time of Rob Moratti with “Heads Or Tales: Live”.

Touring in 2010 with the Heads Or Tales Tour, SAGA once again played all of their hits with the new fresh singer Rob Moratti and recorded a live version of one of their outstanding concerts. During various shows, the album “Heads or Tales” was played live in its entirety from start to finish. The CD documents one of the best renditions of the historical album played live. A great live collection to once again enjoy the hit singles ‘The Flyer’ and ‘Scratching The Surface’ and renowned ‘The Sound Of Strangers’, ‘The Pitchman’ and ‘The Vendetta (Still Helpless)’. Truly celebrating the time with Moratti, “Heads Or Tales: Live” is a purely authentic SAGA experience not only with their line-up new singer, but also new drummer Brian Doerner replacing Christian Simpson in 2005. Sadler is definitely the historical voice of the band, nevertheless this album shows what a great singer Moratti is and it is the best document of the latest phase of SAGA before they launch themselves into a new phase with the original line-up. (edel. com)