Roy Haynes: Birds Of A Feather: A Tribute To Charlie Parker 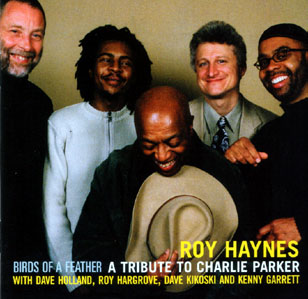 Roy Haynes (geb. 1925)
A Life In Time: The Roy Haynes Story (3 CD + DVD)
3 CDs, DVD
EUR 12,99*
+ Kenny Garrett, Roy Hargrove u.a.
In the true spirit of that revolutionary movement, Birds of a Feather is no exercise in mere nostalgia. Roy and his distinguished cohorts have crafted an album that is both progressive and rooted in the jazz tradition. Utilizing the genre’s more than a half-century of innovative exploration, they showcase bebop’s innate ability to reflect the present in the joyous moment of improvisation.

Surrounding himself with four of the most distinctive and adventurous voices on the contemporary scene -- bassist Dave Holland, altoist Kenny Garrett, trumpeter Roy Hargrove and pianist Dave Kikoski -- the quintet takes burns on six Parker originals and five compositions associated with Bird.

This is not a record filled with drum solos. A short solo here and there, a brief introductory burst, or an occasional exchange of fours may occur, but Roy prefers to do the driving from the back seat. He provides the fuel and thrust that keeps the music blazing ahead, yet with the subtlety and exquisite taste that has made him an exalted member of the drum pantheon.

The six Parker originals contained in Birds of a Feather run the gamut from famous often played works to somewhat lesser known pieces. While the drivers "Yardbird Suite," "Moose the Mooche" and "Diverse" stay within a traditional bop framework with their drum fills, smoking solos and four-bar exchanges between drums and horns or piano, other tunes undergo brilliant transformations. "Now’s the Time," is a classic blues that is a staple of jam sessions and blowing dates. Here it is played in a style exemplified by Miles’ incredible ‘60s "free-bop" quintet, with a fragmented theme over a free-ish rhythmic pulse that still swings mightily. "Barbados" becomes more of a calypso than in Bird’s hands. Its melodious sense of freedom harkens to Ornette Coleman’s groundbreaking early quartets, while "Ah-Leu-Cha’s" theme is stated in a most modern, contrapuntal mode.

The other compositions are similarly full of surprises. While Cole Porter’s "What Is This Thing Called Love" is given a roaring, up-tempo hard blowing treatment, his playful "My Heart Belongs to Daddy" gets a modal, pulsating mid-tempo reading in the Coltrane Quartet style. The powerfully droning bass, heavily rhythmic piano and scalding solos by the horns are ignited by Haynes’ ceaselessly inventive and dynamic drumming. Gerry Mulligan’s "Rocker," best known from the legendary "Birth of the Cool" sessions, is on full burn with daring solos and propulsive ensemble work.

Two provocative ballads, Billy Reid’s "The Gypsy" and Vernon Duke’s "April in Paris" give both horns the opportunity to display their lovely side, and show why Haynes’ brilliant brushwork has set the standard for over 50 years.

Filled with urgency and immediacy, this quintet plays like they’ve been together for many years, setting a high bar for what could reasonably be described as 21st Century Bop.