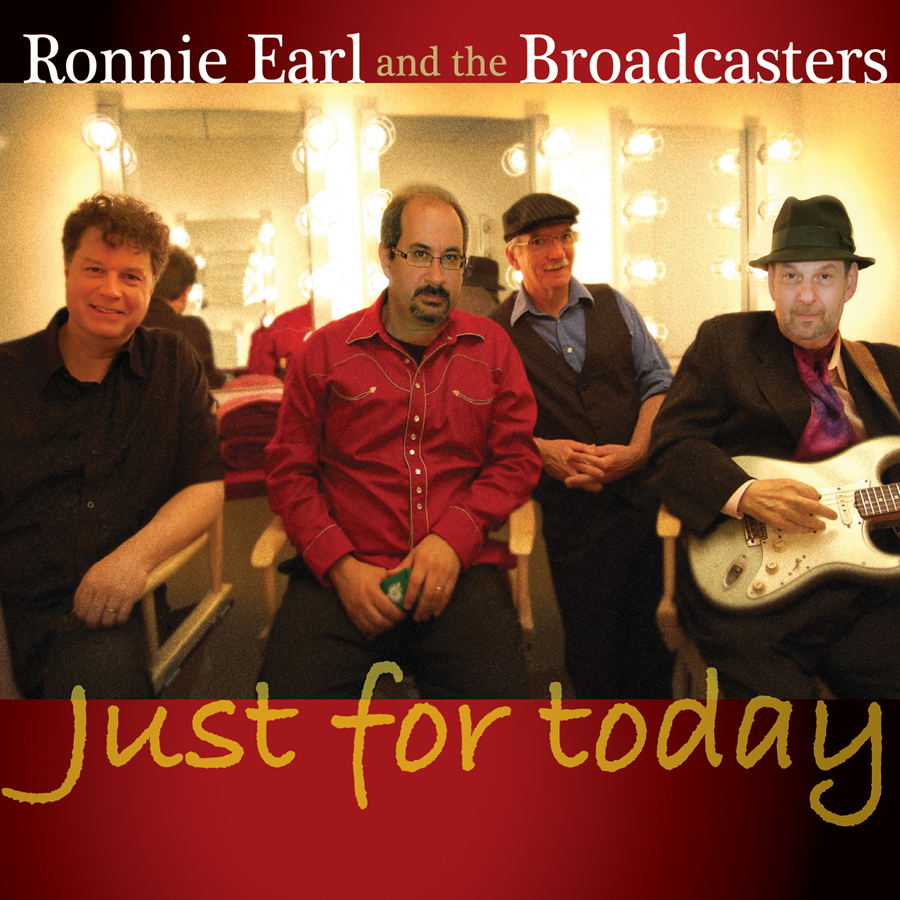 Stony Plain records announces the new CD from legendary guitarist Ronnie Earl & the Broadcasters, recorded live at The Regent Theatre, The Natick Center for the Arts and The Narrows Center for the Arts, venues all located in his home state of Massachusetts. Acknowledged as one of the best guitarists on the planet, Ronnie Earl celebrates the 25th year of the band with long-time Broadcasters’ members Lorne Entress – drums, Dave Limina – piano and Hammond B3 and Jim Mouradian – bass. Singer Diane Blue is a special guest vocalist, and Nicholas Tabarias joins in on guitar for two songs.

On Just for Today, listeners get an up-close, front-row seat into what has made Ronnie Earl one of the most intense and passionate guitarists of his generation, as he squeezes every ounce of his soul into each string bend, guitar phrase and note throughout the mostly-instrumental 13 songs contained on the new CD. As always, Ronnie pays tribute to many of his mentors and influences such as Otis Rush (“Rush Hour”), Hubert Sumlin (“Blues for Hubert Sumlin”) and Robert Nighthawk (“Robert Nighthawk Stomp”). Sprinkled in among the many original songs is a unique cover of John Coltrane’s “Equinox,” as well as signature takes on the aforementioned “Ain’t Nobody’s Business” and “I’d Rather Go Blind,” (which also features Diane Blue on vocals). Guitarist Nicholas Tabarias guests on “Rush Hour,” as well as the band original, “Jukein’.”

Just for Today is Ronnie Earl’s seventh album for Stony Plain and follows his acclaimed 2010 release, Spread the Love, which drew universal praise for its power, soulfulness and spirituality, traits which have become the hallmarks of all his recordings.

“… an album of rare joy and soul from a master who has reached another pinnacle in his playing,” wrote Steve Morse of The Boston Globe. “With the Broadcasters, Ronnie’s latest release shows him to be one of the most soulful blues / soul / jazz guitarists working today,” said j. Poet in his San Francisco Examiner review. “The pacing, segues and production are masterfully done, and the unbridled passion in his playing creates a joyous, uplifting vibe,” added Jeff Johnson in the Chicago Sun-Times.

Born in Queens, New York, in 1953, Ronnie Earl’s journey to become one of the top guitar players in the world began quite late, since he didn’t pick up his first guitar until age 20. Inspired by Muddy Waters, T-Bone Walker, B. B. King, Freddie King, Otis Rush, Big Walter Horton and The Fabulous Thunderbirds, Ronnie quickly developed his six-string skills, playing with an intensity that continues to this day. He has played with such greats as Carlos Santana, Eric Clapton, Earl King, Stevie Ray Vaughan, and The Allman Brothers as well as several of the musicians that inspired him early on.

From 1979 to 1988, Earl played with a number of groups before forming his own band, The Broadcasters, named after the first Fender Telecaster guitar called the Broadcaster. The current Broadcasters line-up have played together for over 13 years and continue to tour, playing their inspired sounds for grateful audiences everywhere, spreading Ronnie’s gospel of love and healing through music.

As Ronnie Earl says in the liner notes for Just for Today, “Always carry hope and an open heart in your life. Don’t quit before the miracle happens."