Petula Clark: In Her Own Write

Petula Clark
In Her Own Write
CD
CD (Compact Disc) 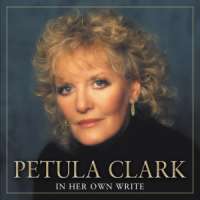 versandfertig innerhalb von 1-3 Tagen
(soweit verfügbar beim Lieferanten)
EUR 14,99*
Versandkosten
IN HER OWN WRITE is one of the most anticipated releases featuring over 65 minutes of Petula Clark musical indulgence!

IN HER OWN WRITE is the definitive collection of Petula Clark's finest compositions, encompassing her writing period between 1980 - 1995.

IN HER OWN WRITE features stunning memorable performances from Petula Clark.

IN HER OWN WRITE includes 18 tracks on CD for the first time!

The Petula Clark album IN HER OWN WRITE has taken many months of careful preparation, tape research and re-mastering in order to present this stunning retrospective of some of Petula Clark's finest compositions. All the songs featured across this collection have been composed or part composed by Petula.

The sixteen page booklet that accompanies this album features a detailed track by track commentary as well as liner notes specially written by Dee Shipman and Tony Hatch.

As well as commercial recordings, the album includes themes and an unreleased film soundtrack scored by Petula herself and also songs from the Petula Clark / Dee Shipman musicals SOMEONE LIKE YOU and ZOLA.

This is the second key release for Sepia Records on their 8000 series and this collection is being fanfared in celebration of Petula's 65th year in show business since first being discovered by the BBC in 1942.