Odetta: One Grain Of Sand 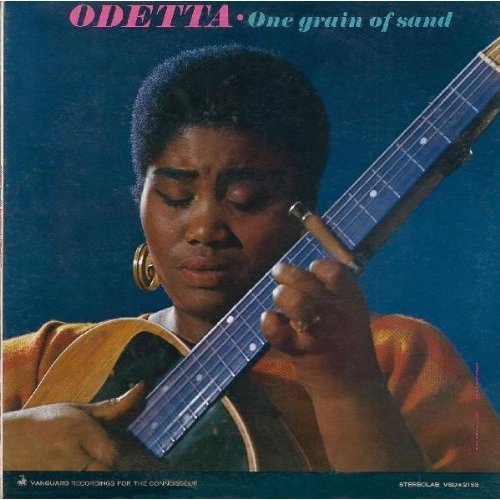 Bewertung:
lieferbar innerhalb 1-2 Wochen
(soweit verfügbar beim Lieferanten)
EUR 11,99*
ODETTA comes from an old school of black American song interpreters, often overlooked after the 50s-early 60s folk scene when the pigeon-holeing of the day seemed to find no room to accommodate anything other than traditional song (blues, worksongs, gospel), protest and singer-songwriter fare. Odetta was instead in a line of black artists, which included Paul Robeson, Jackie Washington, Harry Belafonte, Leon Bibb (Eric’s father) and many others, whose repertoire was drawn from the breadth of commercial and folk song.

Born in Birmingham, Alabama, in 1930, Odetta had voice and classical music training as a youngster. She appeared in the 1949 Los Angeles production of Finian’s Rainbow and a year later in the San Francisco run of Guys And Dolls before being drawn into the emerging folk scene of the early 1950s. Her début album “The Tin Angel” was released in 1954 and over the next decade she established herself as one of the folk scene’s most authoritative voices.

By 1963, when she released ONE GRAIN OF SAND, Odetta was a formidable cultural presence (check out her “live” work on the just-released DVD of Festival, taken from the early 60s Newport Folk Festivals). “One Grain Of Sand” finds her singing and playing guitar with accompaniment by Bill Lee (Spike Lee’s father, who also was responsible for the music in his son’s movie Mo’ Better Blues) on string bass. She covers everything from Leadbelly’s Midnight Special to Woody Guthrie’s Rambling Round Your City and American folk ballads such as Come All Ye Fair And Tender Ladies. It’s the contrasts that always surprise: the haunting traditional She Moved Through The Fair positioned next to the singing cowboy classic Cool Water (a song written by the Sons Of The Pioneers’ Bob Nolan). Also, worth checking out is Bill Lee’s excellent bass playing on the title song, interweaving with, and supporting, Odetta’s moving, slightly distracted vocal.