Matthew Herbert: Theres Me And Theres You 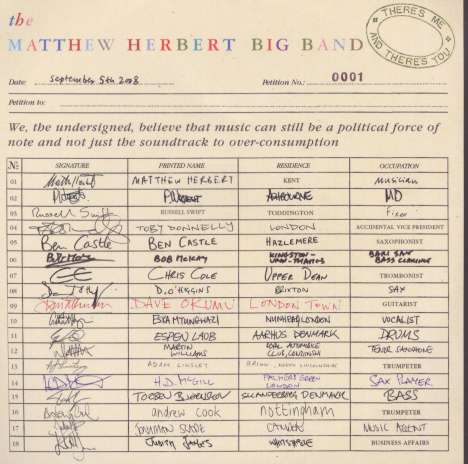 Featuring the cream of British jazz musicians, 'There's Me and There's You' is a sequel of sorts to Herbert's 2001 project 'Goodbye Swingtime'. It was largely recorded at London's fabled Abbey Road studios, although Herbert also incorporates sounds specially orchestrated at significant sites including the British Museum and the Houses of Parliament.

Effortlessly wrapping deluxe avant-jazz arrangements around polemical lyrics and artfully selected noises, the album's dominant theme is power and its abuses in the 21st century. The war in Iraq is a key rallying point, informing several tracks including 'One Life' and 'Waiting'. The power of monarchy is addressed in 'Regina', religion in 'Pontificate', media in 'The Story', wealth inequalities in 'The Rich Man's Prayer', and state-sponsored torture in 'Battery'. The hypocrisy of climate change politics and the evils of rampant consumerism are also recurring motifs.

An electronic innovator, sonic explorer and prolific collaborator, Herbert has released a huge catalogue of critically acclaimed music under his own name as well as Doctor Rockit, Wishmountain, Radio Boy and others. He has also produced and remixed artists as diverse as Björk, REM, Quincy Jones, John Cale, Yoko Ono, Dizzee Racal and Roisin Murphy, as well as working with highly regarded original thinkers such as the chef Heston Blumenthal and playwright Caryl Churchill.

But 'There's Me and There's You' marks a new chapter in his career. This is Herbert's debut recording with revered and versatile London-based artist Eska whose vast array of past collaborators includes David Sylvian, Lewis Taylor, Anthony Tidd and Afrobeat legend Tony Allen.
"Eska's a vital part of it," says Herbert. "She's really the beating heart of the record. It's vastly impressive the breadth of styles she passes through, but always in service to the original intention. This is hopefully the beginning of a long-term collaboration."
Herbert's albums always closely interweave medium with message, surface beauty with political subtext. But he hits bold new conceptual heights on 'There's Me and There's You', which turns the very fabric of power against itself in unprecedented ways.

Matthew Herbert
The State Between Us
3 LPs
EUR 33,99*
alle anzeigen