Made Out Of Babies: Trophy

Made Out Of Babies
Trophy
CD
CD (Compact Disc) 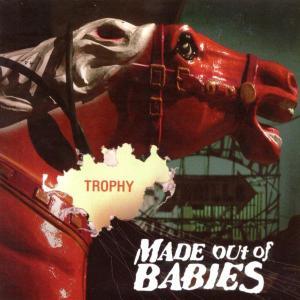 Duran Duran
Future Past (Limited Indie Exclusive Edition) (Transparent Red Vinyl)
LP
EUR 24,99*
As it's playfully gruesome name might imply, Made Out Of Babies is not a demure or delicate band - it's an aberration of innocence. Neurot Recordings continues to confound expectations with Made Out Of Babies' debut album, Trophy - perhaps the label's most outright "rock" based release to date. But make no mistake, there's nothing conventional about MOOB. Just likeNeurot - whose sole imperative it is to release music of exceptional quality that challenges the mind while also expressing true passion and soul - this urgent and contorted New York City quartet turns rock idiom inside out, without the art-fuck pretense of most contemporary bands. Trophy opens with the deceptive calm of "Herculoid" as Cooper's delay-drenchedbass chords and Matt's propulsive beats allude to an eruption to come, as Julie coos, "with broken fingers and broken nose - you got in far". Brendan's guitar drops in and the whole band suddenly turns surly. Cymbals crash. Chords crunch. All fourMOOB members become one psychotic impulse. Elsewhere, on songs like "Swarm" and "Sugar" Julie's whirling dervish vocals soundlike a cross between Babes In Toyland singer Kat Bjelland and a fiercer Karen O of the Yeah Yeah Yeahs while the guitars trade off lead positions, dully distorted and disruptive as the drums roll and tussle, tirelessly keeping the entire wrestling matchmoving. Made Out Of Babies could easily be the soundtrack to an 18th Century witch-hunt woodcut illustration - it's direct and to the point, but imprinted with the stark contrast of the frightening formality of culture as if a reminder of the disturbing timelessness of human cruelty. Trophy is a captivating and evocative debut that dispenses our illusions with each vicious and cutting gesture.