Junior Brown: The Austin Experience - Live At The Continental Club 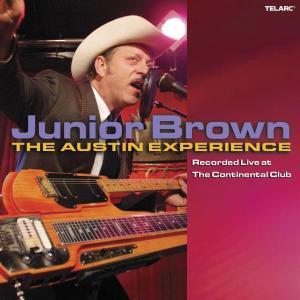 Bewertung:
lieferbar innerhalb 1-2 Wochen
(soweit verfügbar beim Lieferanten)
EUR 12,99**
EUR 11,99*
Verlängerter Rückgabezeitraum bis 31. Januar 2022
Alle zur Rückgabe berechtigten Produkte, die zwischen dem 1. bis 31. Dezember 2021 gekauft wurden, können bis zum 31. Januar 2022 zurückgegeben werden.
Versandkosten
Junior Brown, the multi-dimensional Americana / honkytonk artist who dazzled fans in 2004 with his Telarc debut, Down Home Chrome, ratchets up the intensity with Live At The Continental Club: The Austin Experience, a richly layered set that captures the witty songcraft and mind-bending fretwork that have become his trademark in the live setting. Recorded at The Continental Club in Austin, Texas, in April of 2005, the album captures Junior in front of a wildly appreciative audience in one of the most musically rich towns in the fifty states.

Armed with his unique Guit-steel—an otherworldly double-necked machine that marries the six-stringed guitar with its steel counterpart—Brown blasts through twelve tracks that mix the best of country, blues, Tex-Mex, Western swing, rock and roll and countless other shades of electrified American music. The result is a high-octane rollercoaster ride that careens from one emotional touchstone to another—from the rollicking to the poignant to the humorous and beyond.

The set kicks off with the brief but punchy “Broke Down South of Dallas,” a midtempo rocker with generous Guit-steel work complemented by Junior’s flexible vocals. The honkytonk followup track, “Party Lights,” draws the humorous distinction between the allure of flashy nightlife and the less friendly lights on top of a police car. Equally comical is “My Wife Thinks You’re Dead,” a shuffling track that chronicles a meeting with an old flame.

Things move into a higher gear later in the sequence with “I Hung It Up,” with a lengthy instrumental opening and an even lengthier solo interlude further in—both of which showcase Junior’s inexhaustible guitar chops. Equally energized is the lights-and-sirens, drop-the-hammer rendition of Junior’s classic “Highway Patrol.”

In addition to the well-known classics, Live At The Continental Club: The Austin Experience also includes a couple previously unrecorded songs. The bouncy “Juan Charasquado,” sung in rural Spanish, aided by Flaco Jiminez on accordion and loaded with borderland bravado, serves as Junior’s heartfelt tribute to his early roots in northern New Mexico. “Lifeguard Larry,” a longtime favorite in Junior’s live show, takes a comical look at a guy whose motivations for “pulling girls out of the sea” is about more than just saving lives.

And just when you think he’s spent every lick and exhausted every riff, Junior opens up the throttle one last time in the final number, an extended “Rock and Roll Guitar Medley” that weaves together variations on classic surf guitar rockers like the Ventures’ “Bulldog,” Johnny Rivers’ “Secret Agent Man” and others.

Live At The Continental Club: The Austin Experience is a window into the rare and riveting experience of Junior Brown in front of a live audience. More than just a string of entertaining songs—and that would be enough where Junior’s concerned—it’s an ear-opening journey with a few surprises along the way. Wherever your point of origin—north or south, rock and roll or country, edgy or genteel—this recording will pull you out of your chair, put the shake in your shoes, and quite possibly dismantle every preconception you’ve ever held about music in general.

The release of Live At The Continental Club: The Austin Experience comes on the heels of Junior’s most recent taste of Hollywood fame. He puts his rich baritone pipes to good use as narrator for The Dukes of Hazzard, Warner Brothers’ big-screen adaptation of the popular TV series of the late ‘70s and early ‘80s. In addition, his “Highway Patrol” and “My Wife Thinks You’re Dead” are scheduled to appear in the movie.