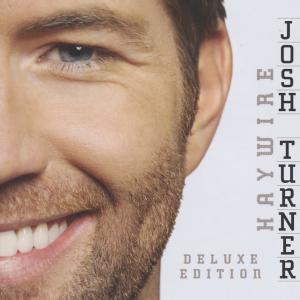 Bewertung:
Nur noch 1 Stück am Lager. Danach versandfertig innerhalb von 1-3 Tagen (soweit verfügbar beim Lieferanten)
-20%
EUR 9,99**
EUR 7,99*
Whether it’s with his deep, soulful voice, his South Carolina accent or his philosophy on life, Josh Turner has never been one to hurry. But a memorable country song recently convinced him to pick up his pace.

The singer-songwriter was months away from scheduled recording sessions when he first heard “Why Don’t We Just Dance,” which became the debut single from his fourth studio album, Haywire. Josh placed the song “on hold” with the music publisher so they wouldn’t allow anyone else to record it. But when another artist expressed interest in the song, the publisher asked Josh to record the song to see if he liked it enough to keep it, and he did.

“We felt like we couldn’t lose that one,” Josh says. “It’s a strong song and something that I could have a lot of fun with vocally. I felt it would be a great center point for the record. It is positive and a love song and you can dance to it. Nowadays, that’s a good formula.”

The excitement over that song fast-tracked the recording process and inspired his songwriting, propelling him to write or co-write five of the album’s 11 songs: “Haywire,” “As Fast As I Could,” “Eye Candy,” “Friday Paycheck” and “The Answer.”

“This record has been the quickest record we’ve ever made from start to finish,” says Josh. “But I’m glad our haste didn’t make waste. I love every single song. One thing I’ve noticed is that you are definitely hearing more of my range, high and low on this album. I’m really proud of this record.”

And that’s saying something, given what he’s accomplished so far. Since earning a standing ovation as an unknown singer on the Grand Ole Opry stage in 2001 with his impressive delivery of “Long Black Train,” he has established himself as one of the most identifiable male vocalists in country music.

The Hannah, S. C. native has sold more than 4 million albums and garnered two multi-week No. 1s (“Your Man” and “Would You Go With Me”). His debut album was certified platinum for more than 1 million copies sold, and his sophomore album, Your Man, was one of only four country albums to reach double-platinum status in 2006. Six years after his Opry debut, he was inducted into the prestigious organization, becoming one of the youngest artists to receive such an honor. He recorded a CMT special with his musical hero, Randy Travis, and has spent time writing songs with another one of his heroes, John Anderson.

“For me, it is icing on the cake,” he says of his success. “My biggest goal in life when I was growing up was to find the right woman to marry and get a record deal. I’ve accomplished both of those things, so regardless of what happens beyond that, I’m happy.”

“When I wake up in the morning, I think about writing and performing and singing country music. I’m happy I get to go out on the road making a living doing what I love to do and it’s all because I chased my dream and never gave up.” Blender magazine says Josh “is a country Barry White. His burring voice can tease our sensuality in unlikely places.” His rich baritone brings an undeniable sexuality to a love song, so it’s no surprise that love songs have been among his most popular recordings. The majority of songs on Haywire are love songs; there’s not a heart-break or cheating song to be found.

“I don’t feel like you can have too many love songs,” he says. “The world is always looking for that next great love song. It’s like what Eddy Arnold told me a long time ago. ‘If you have the opportunity to record a great love song, do it. That is what people like the best, the songs that are about a man and a woman.’ I’ve really taken his advice to heart. If you look at my two number-one songs, those are big-time, positive, straight-forward love songs.”

He’s at his most masculine and sensual on “Lovin’ You On My Mind” and the Don Williams’ classic “I Wouldn’t Be a Man” while he reveals his sweetness in “As Fast As I Could.” He’s timelessly romantic in “Your Smile,” and “Haywire” and “Eye Candy” capture his playfulness and humor.

It was a father’s love that inspired the Phillip White / Steven Dale Jones song “I’ll Be There,” and Josh was moved by lyrics such as, “When you need a coach or you need a fan / Need a castle built out of ocean sand/ Or a rainbow chaser, I’m your man/ I’ll be there.” While they were recording the song, keyboardist Gordon Mote suggested an arrangement change.

“The music fades away and then I start singing with just the piano and it builds up to the line where it says, ‘Need a daddy or you just need a friend,’” says Josh, the father of two boys. “The first time we changed the arrangement, the words wouldn’t come out because I was getting choked up. That had never happened to me in the studio. I was extremely emotional when that part rolled about because it was just a touching way to sing that last verse. There were so many images running through my mind. That was the first time the father in me really came through on a song and I didn’t even see it coming. It just happened naturally.”

Josh explores his love for Jesus in “The Answer,” a soaring song that required Josh to step out of his comfort zone in the studio. “There was a spot in that last chorus where I was like, ‘This song has got to just bust wide open,’” he says. “It was a little tough for me because I’m not used to singing way up there in the high part of my register, but you definitely hear that on that song. It is such a powerful song so I just gave it all that I had.”

Josh uses this same approach to his career in the music industry, where many artists seem to come and go quickly. “I don’t ever want to take anything for granted,” he says. “I’ve learned from certain people that it takes a lot of hard work, passion and love for what you do to have longevity in this career.”