Josh Groban: All That Echoes 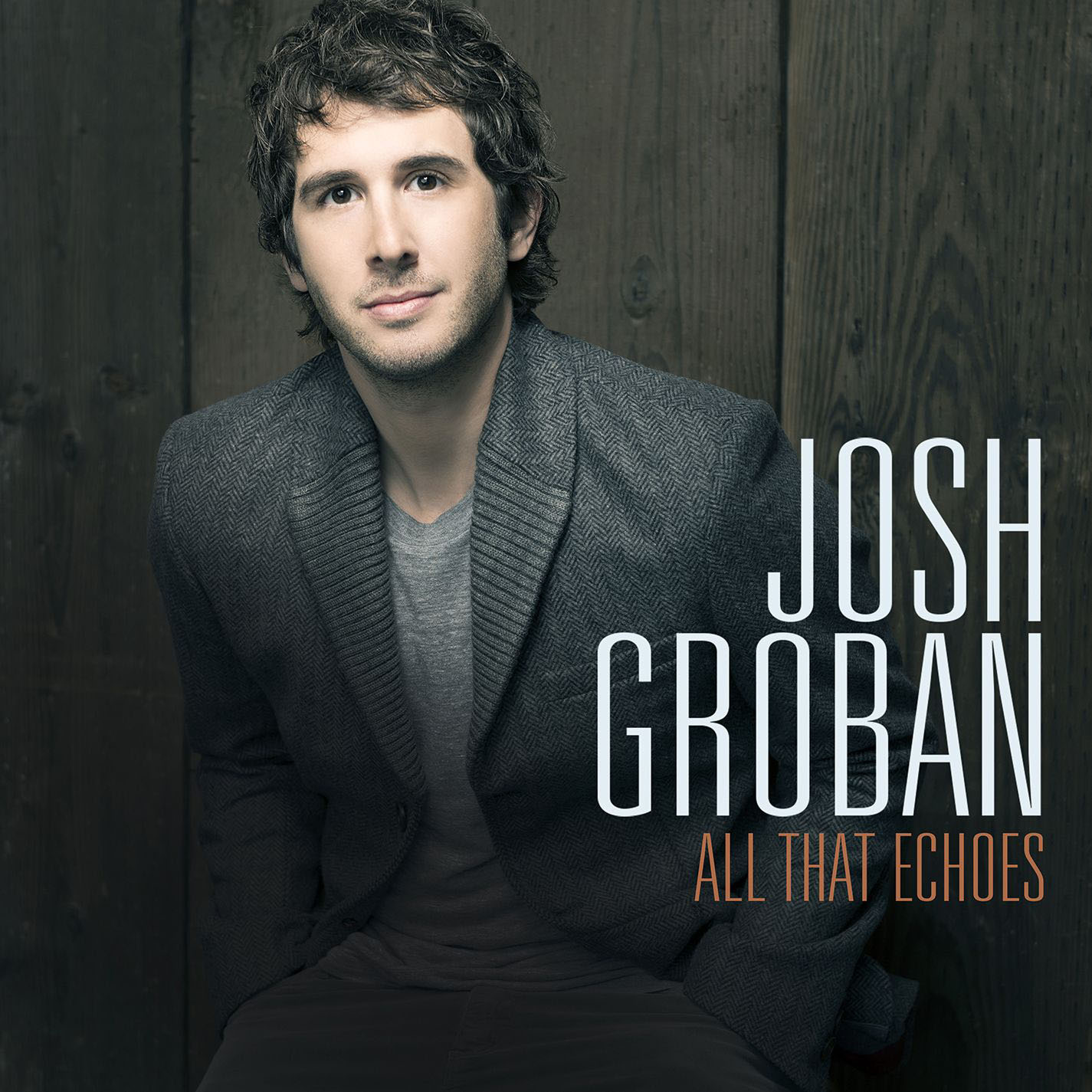 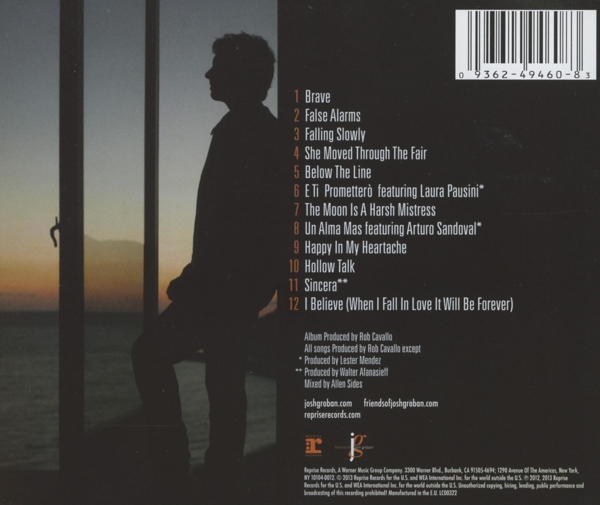 Weitere Ausgaben von All That Echoes

With his sixth album, All That Echoes, Josh Groban has at once built on the touchstone artistry that has made him a global pop star for more than a decade and expanded his ambitious reach into richly rewarding new territory.

The inspiring first single “Brave” shows off his accomplished, personal songwriting as one of seven songs on the album he co-wrote. And inspired choices of other’s songs, from the Academy Award-winning “Falling Slowly” from the movie and Tony Award-honored spin-off Broadway musical Once to Stevie Wonder’s “I Believe” through his continued explorations of the poetry of Spanish (“Un Alma Mas,” featuring Cuban-born trumpet great Arturo Sandoval) and Italian (“E Ti Prometterò,” a duet with Italian star Laura Pausini), spotlight his singular talents as a masterful interpreter.

Working for the first time with producer Rob Cavallo (the Warner Bros. Records chairman whose production credits cover Green Day’s many groundbreaking albums, Goo Goo Dolls, Fleetwood Mac and many others), Groban pushed himself to fully capture the spirit of his acclaimed concerts, fueled by his vibrant bond with legions of his fans, the famed Grobanites.

“The album was really sparked by an energy I had on the road,” he says. Any of the hundreds of thousands who saw his shows in support of 2010‘s Illuminations, in which his writing and ambition took full flower, knows what he’s talking about. Those concerts were at turns playful and intimate — even in arena settings — and affectingly powerful, with equal measures of musical virtuosity and spirited, spontaneous personality. The latter has also brought him a rising career in movies and television, with an hilarious recurring guest role on The Office, a sparkling part in the hit Steve Carrell / Julianne Moore film Crazy, Stupid, Love and a as costar of the upcoming small-ensemble comedy Coffee Town.

“I thought, ‘This is the energy, the dynamic I want for my next record, the feeling I’m getting on stage,” he says.

When he and Cavallo had dinner after a show in Chicago to discuss the possibility of working together, it was clear right away that they had the same things in mind.

“When Rob came out to Chicago he basically shared the same adjectives with me that I had in my head,” Groban says. “I wanted this to be soulful, wanted it to be righteous and dynamic and inspirational and energetic. And mainly wanted to find the sweet spot of my singing voice again. I always find it on tour.”

To achieve this, Cavallo — the 1998 Grammy Awards producer of the year — devised a creative studio approach. Though as a producer he’s best known for his rock work, he’s had a greatly wide-ranging career and, he notes, was raised immersed in the classical world thanks to his opera-loving grandparents — Luciano Pavarotti was a family friend who would visit, drawn largely by his grandmother’s cooking. The chance to bring all those worlds together in one project was a challenge he relished.

Working at the famed Ocean Way Studios in Hollywood, he started with an all-star core band: drummers Matt Chamberlain and Abe Laboriel Jr., the latter having just come off the road anchoring Paul McCartney’s band; bassist Chris Chaney came from Jane’s Addiction; in-demand guitarist Tim Pierce joined with credits ranging from Madonna to Dave Matthews, and keyboard player Jamie Muhoberac has worked with the Rolling Stones, Fleetwood Mac, Seal, My Chemical Romance and many others. To this, the producer added the secret ingredient, a trio of the top orchestral session artists in L. A. in cellist Dane Little, violinist Charlie Bisharat and harp ace Gayle Levant.

And then, to provide as fertile an environment as possible, he gave them and Groban a sense of complete freedom.

“We tried this experiment,” Cavallo says. “We got the best — the best guitarists, keyboards, bass, drummers, and then got the best harpist, cellist and violinist in L. A. and got them to play together so they would be sensitive to each other. We tested it out, didn’t know if it would work. And it worked great! Everyone had to listen to each other and react and play accordingly. Josh was the leader. Everyone’s chemistry came together at that time. Really made for passionate vocal takes. What you’re really getting now is a very pure type of truth from Josh. Very pure.”

Arrangements were worked up collectively, “The rhythm section came in ready to rock,” Groban says. “The orchestral guys came in controlled, and the nice balance was the that the rock guys brought out a real edge in the orchestral players and the orchestral players brought out a real sense of control and nuance to the way the rock guys would play. To see Abe Laboriel play with a harpist was great! And Gayle said that it hasn’t been since the Sinatra days that they were able to improvise with a rhythm section. So when they said to me, ‘Your mic is ready,’ it made it inspiring for me to sing on top of that, add my element, the three worlds blending together.”

Most of what’s on the album was from the first few takes of each song, with the spontaneous spirit intact. Even the full orchestra parts, added later, expanded directly from the music created by the three strings players in the initial sessions.

And the vibe extended outside the studio.

“It’s a musical camaraderie, not just showing up for a gig,” Groban says. “That all starts at the top with Rob. And it wasn’t just the playing, but the joking around and the dinners — we all got to know each other so well. Sometimes that magic that happens when you’re off the clock, so to speak, when you’ve technically done your job but think you can do it better. Got that extra oomph from everybody.”

It went literally outside the studio in the case of “Hollow Talk,” a song that originated with the Danish indie band Choir of Young Believers.” It’s a song of complex musical turns and intertwined emotions, building from an intimacy to a big, expansive sound with orchestra and bagpipe. Groban remarked in the studio that it brought out the vision of a lonely girl walking down the street — and engineer Allen Sides, inspired, took a microphone out onto Sunset Boulevard to record street noises.

“We’re hearing the cars go by and going, ‘I don’t know why this would work,’ but it really does,” Groban says. “And it turned out awesome.”

Groban was inspired to push himself as a writer, expanding on the achievements on Illuminations, the first album to be centered on his own compositions. “Brave” saw him team with long-time collaborator Tawgs Salter and singer-songwriter Chantal Kreviazuk.

“When Rob was saying, ‘Let’s widen the lane,’ you still don’t want to sound out of your element,” Groban says. “‘Brave’ represents one of the higher energy songs, but never felt out of place to me. Never felt this was out of my world. It represents the kind of energy I had on stage. I would want the lights going crazy and the band rocking out and something that blows the hair back and moves me. This to me represents every adjective Rob and I thought of in that meeting in Chicago.”

The lyrics and melody for “Below the Line,” co-written with Salter and Simon Wilcox, were formed on the day Groban participated in Life Below the Line, for which people subsist on $1.50 for a day in order to understand the levels of true poverty.

“It was not fun,” says the singer, whose own Find Your Light Foundation has focused on much-needed arts education programs. “A can of beans was my food, half in the morning and half at night. Somehow a song came out of it. It’s not necessarily the full message of the song. The vibe is, ‘We’re not helping ourselves until we’re helping others.’”

Another regular collaborator, Lester Mendez (who also produced two songs on the album), teamed with Groban on “False Alarms” and, along with Salter and Italian lyricist Marco Marinangeli, “E Ti Prometterò.” For a second Italian song, “Sincera” he reunited with acclaimed producer-composer Walter Afansieff (who produced the song) and Marinangeli.

Such personal bonds and connections abound throughout the album. Groban and Irish singer-songwriter Glen Hansard, co-writer of “Falling Slowly” and co-creator of both the movie and musical Once, have built a friendship — the musical even includes a winking joke at Groban’s expense and the singer introduced its segment at the Tony Awards show. Laura Pausini, Groban says, “was the first global superstar I ever met,” an encounter that happened when he was just 17 and attending the MIDEM conference in the south of France. A friendship grew and both kept hoping there would be an opportunity to collaborate, which finally came with “E Ti Prometterò.”

A few years back, Groban found himself sitting next to one of his heroes, iconic writer Jimmy Webb, on what turned out to be a harrowingly storm-tossed New York flight. Here, he steps up to tackle Webb’s “The Moon is a Harsh Mistress,” a song of complicated emotions that has tantalized with past interpretations by such stars as Judy Collins and Linda Ronstadt. And the haunting traditional Irish song “She Moved Through the Fair” came to him while “having my late-night glass of wine and trawling YouTube” via a live solo version by English folk-rock legend Richard Thompson, another long-time Groban favorite.

“Having grown up on Irish music, I thought, ‘Let’s give it a try,’” he says of the song, which has also been recorded by artists including Van Morrison and Sinead O’Connor. To give it the right tone, Levant switched to Celtic harp and Groban brought in another old friend, Eric Rigler, virtuoso on the Irish Uilleann pipes. “After writing sessions, trying to be clever, it’s nice to be reminded by songs like this that just sit in a place that’s right.”

And to tie it all up, the album ends with the Stevie Wonder classic. “Talking about the light and dark and trials and tribulations of love, no one writes about that better than Stevie Wonder,” he says. “It’s about how imperfect we can be, how many lessons we can learn. ‘Even though I messed up in the past and have done things wrong, the next time love comes my way, I’m not going to let go.”

Groban’s voice brings a truly personal stamp to the song, with the band and full orchestra joined by a full gospel choir. And the end of the song again captures the spirit that fueled the whole of the All That Echoes sessions, with Groban drumming (!) and singing a “big, stupid finish, unabashedly saying, ‘There it is!’”