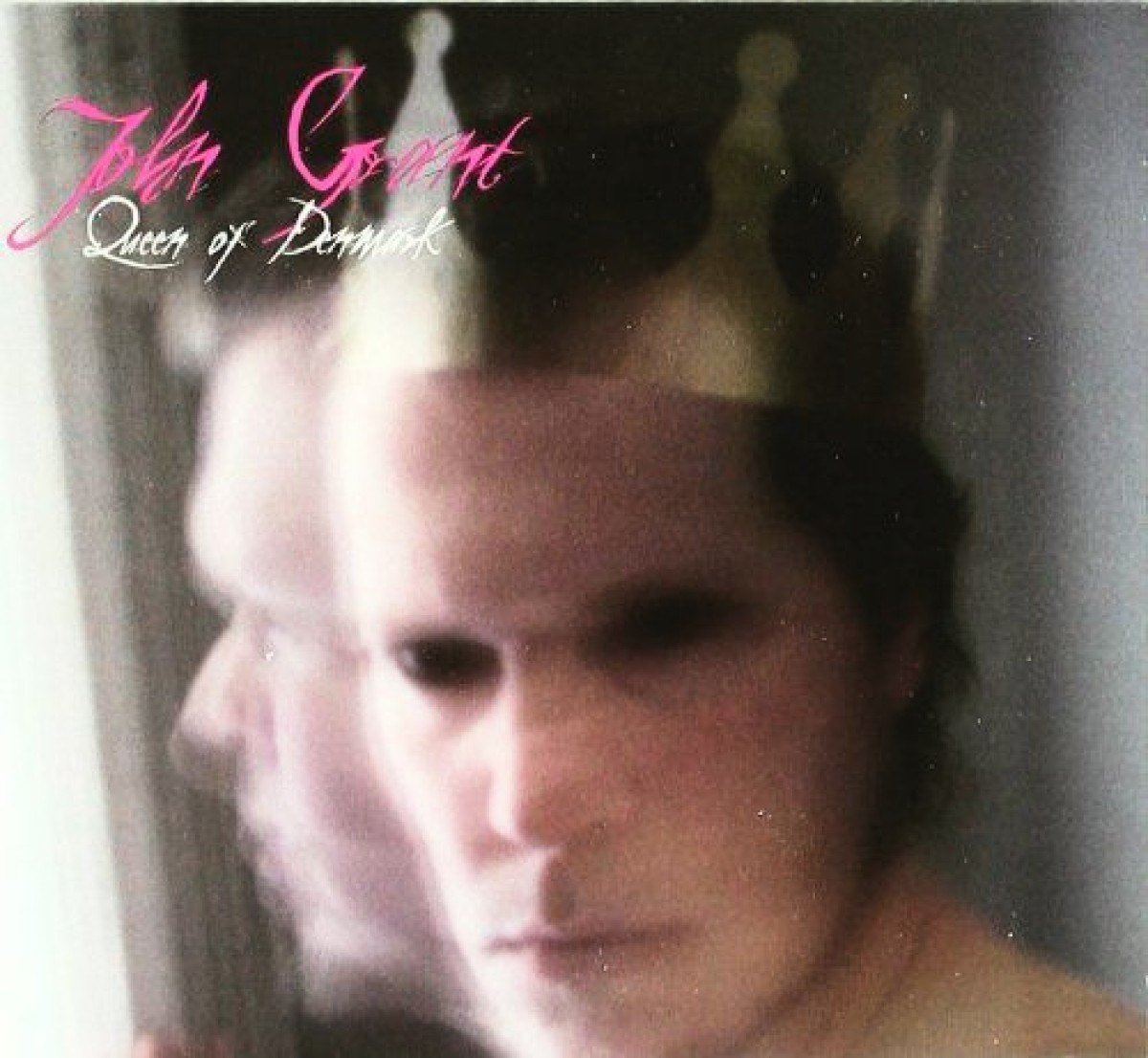 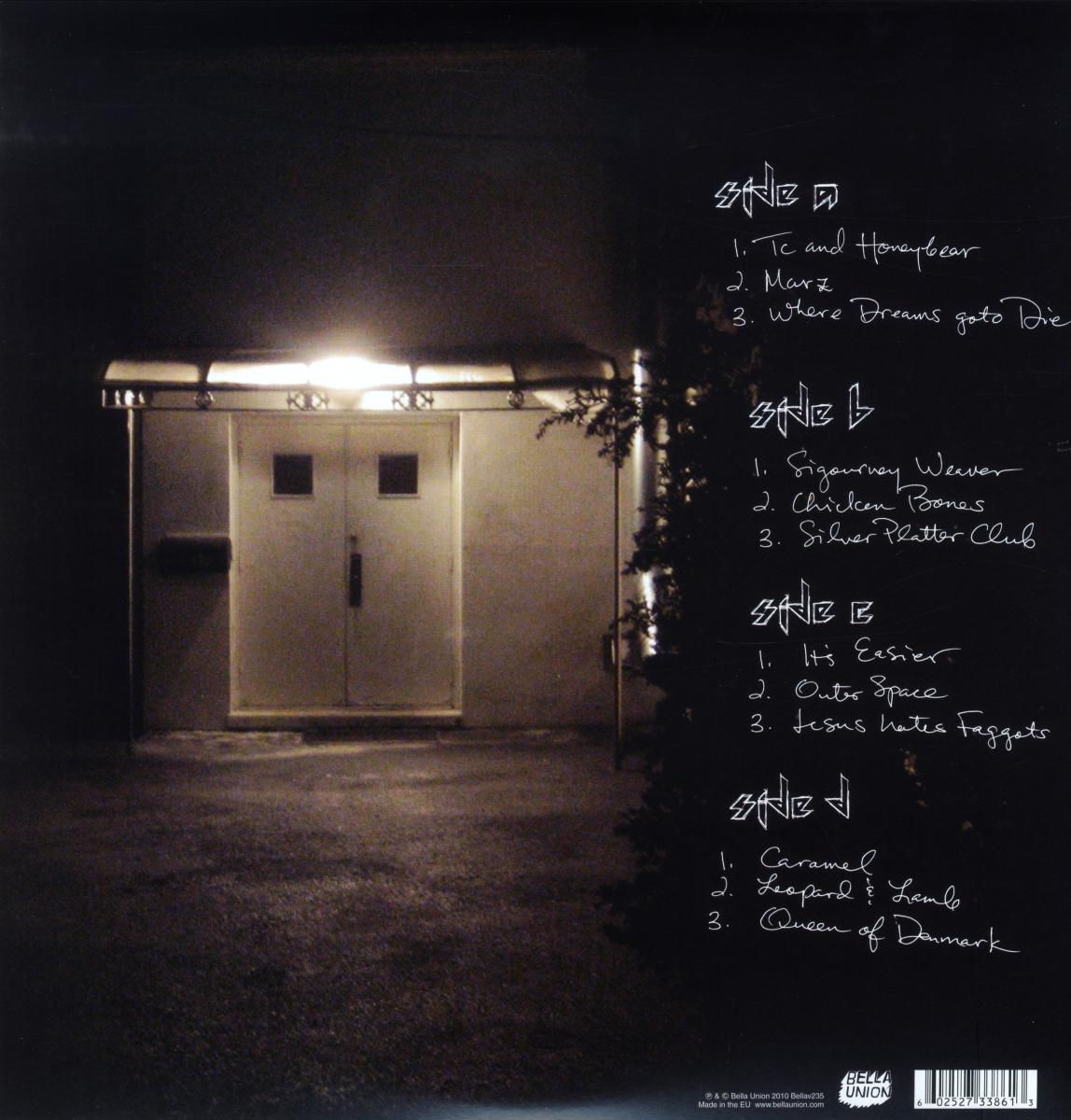 *** Gatefold Cover
For a new album signaling a new start, Grant needed change, namely a more ‘70s-centric sound – the double-tracked vocals, the chorus effects, the shifting arrangements and instrumentation. “People haven’t been able to stop going on about the ‘70s so I thought I should dabble deeper myself and see why. But really what I’ve done is return to my roots.”

Queen Of Denmark was recorded in Denton in two four-month stints – July-October 2008 and May-July 2009 - in the studio downtime while Midlake were painstakingly recording their own album (The Courage Of Others). Every Midlake member chipped in but Paul Alexander and guitarist Eric Pulido, who co-produced the album with John, are on every track alongside drummer McKenzie Smith. John reserves special mention for Paul’s basslines. “They were outrageous, off the fuckin’ hook. Some evenings, we couldn’t stop smiling and laughing because I was so excited about his work.” The whole Denton experience, he adds, “was really uplifting. It was emotional and painful too but Midlake believed in me and told me, ‘people need to hear you, and we’re going to make it happen.”

With such support, Grant wasn’t going for any half-measures. “For me, there isn’t a word of filler on the album. I’ve made a very clear statement about where I’m at and who I am as a person, and that’s one reason I’m so proud of it, that I was able to articulate it. At least I’m being given a chance to embrace the pain instead of being afraid to move through it.”

Queen Of Denmark moves through simple piano settings (the lovestruck ballad ‘Caramel’ and the intriguing Scott Joplin-meets-Beatles ragtime of ‘Silver Platter’), via an infusion of period-perfect synths (the rockier ‘Sigourney’, a sultry ‘It’s Easier’) that epitomise the lonely mood. There’s flute from Midlake frontman Tim Smith on the dreamiest cut (and there is stiff competition) ‘I Wanna Go To Marz’, and velvet strings (‘Dreams’, which imagines Scott Walker influenced by Patsy Cline, and the darker drama ‘Leopard’). There are allusions to higher beings (‘Outer Space’) and to human weaknesses (‘JC’). There is pure longing regret in the opening ‘TC And Honeybear’ and bitterly sarcastic, amped-up anger in the magnificent title track finale. Pain, hope, fear, regret, anger, self-flagellation and self-discovery - Queen of Denmark has it all.

But what, you might well wonder, has the Queen of Denmark got to do with all this? Check the man’s track-by-track comments for the full breakdown…

‘TC And Honeybear’
"I wrote this for a very special man by the name of Charlie who changed my life. It’s about how the relationship wasn’t possible because of what is going on in both of our lives. It’s my favourite song. It’s beyond sad, but there is nothing sad about what has transpired between us. I met someone beyond special and he changed my life and that’s all there is to it and that cannot be taken away from me.”

‘I Wanna Go To Marz’
“Marz was a sweet shop from my childhood. It’s now empty and for sale. But I got to visit before hand, and the woman who served me as a child was still there. They still made all their own candies and ice cream. After it changed owners, I went back again and was given of the original menus. In the song, I list all the names of the sundaes, and drinks like Green River. The song is about the gateway back to childhood and innocence, when things haven’t become complicated.”

‘Where Dreams Go To Die’
“The object of my affection, like Charlie, is “where dreams go to die” because I’m not actually seeing that person; I’m seeing the fantasy of who I think he is - the hero who’ll save me rather than the flawed human. The song was written on tour years ago with The Czars, which is painful because I see that this feeling is nothing new to me; it’s been happening since my late teens.”

‘Sigourney Weaver’
“The kids at school in Colorado got Porsches for their 16th birthday, and I was from this little town in Michigan. I was totally out of my element. They’d call me a faggot - they had no idea they were right, of course, but I was still terrified by it. I felt like Sigourney Weaver battling those aliens, like I was on a different planet. It struck me as a funny way to talk about something horrible, to turn the experience into something else. I love sci-fi, especially movies like The Fly and Aliens where people metamorphosise. I think I gravitate toward them because of the possibility of becoming something completely different.”

‘Chicken Bones’
“In New York, I lived in Crown Heights, Brooklyn, a neighbourhood I grew to love but at first, the junkies and prostitutes horrified me. The day I moved in, a woman across the street shouted, ‘you better lock your doors, white boy!’ There were these chicken bones all over the sidewalk, and trash everywhere. One day, a little girl on the stoop saw my bicycle and said to me, ‘you need a Mongoose, baby!’ meaning this other brand of bike. Another time, one of the elderly prostitutes shouted out, ‘Calgon, take me away!’ which was the slogan for this ‘70s bubble bath. The comment wasn’t lost on me.”

‘Silver Platter Club’
“Ryan was this friend I used to work with in Denver. He belonged to that club of young men that had everything on a silver platter - the looks, athleticism and natural effortless masculinity, everything I desperately wanted when I was growing up so I could fit in. I’d always respond to him with, ‘I’m sorry, I haven’t had everything handed to me on a silver platter’. I always meant it to be absurd, but it was exactly the way I felt. Yet I know it’s not something to strive for and to be jealous of.”

‘It’s Easier’
“This is about Charlie too. I couldn’t believe he loved me and was in love with me because of the boundaries he was setting. Because he wouldn’t just rush into it like I wanted to. I found it easier to simply believe that he was lying to me when he told me he loved me, to deal with whatever I couldn’t understand.”

‘Outer Space’
“This is for my best friend Kristin. We met in 1987, on New Wave night in Denver. She looked like Debbie Harry in her heyday but she’s never ever picked a boyfriend on her ability to get what she wanted based on looks. She’s always interested in people in the realest sense of the word, which is completely foreign to me. It’s like she’s from another planet when it comes to the stuff I deal with in my world.”

‘JC Hates Faggots’
This comes from growing up in a strictly religious family. I’ve found people use religion to hate whatever it is they hate personally. The song progresses from benign stuff like the things you hate on a personal level, like food, to postal clerks who waste your time. The “mastermind of lies” is the devil.”

‘Caramel’
“That song is about Charlie, and still holds true, which is why it will be hard for me to sing live. Nothing there is hidden.”

‘Leopard and Lamb’
“This is an old lyric that I match to the right music for years. It’s about my old boyfriend Chris, who had severe acne scarring on his back that looked like leopard spots, which was an aspect of him I liked. I mention The Simpsons because we watched it together constantly, so when things fell apart, it was hard for me to watch the show afterwards.”

‘Queen of Denmark’
“It’s about addiction - I guess the whole album is too. I don’t know why I didn’t write “King” - maybe ‘Queen’ is a gay reference. But I wanted to incorporate Denmark into a song because I’d met a bunch of Danish people and fallen in love with the language. It was me saying the most random thing I could think of: “who knows, maybe you’ll get to be the next Queen of Denmark” because at this point, I have absolutely no idea who I’m going to become when I’ve worked through everything.” (bellaunion. com)