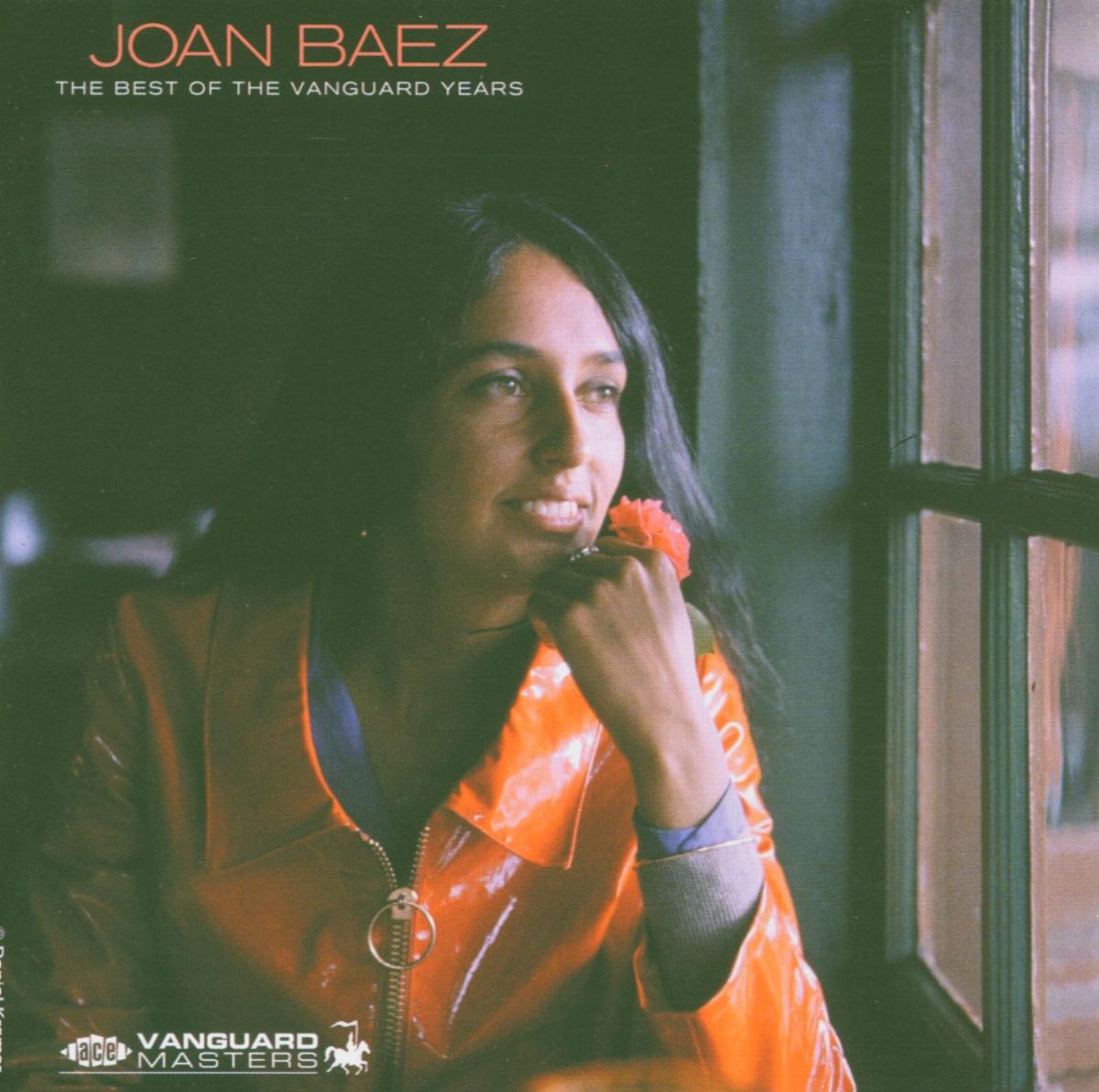 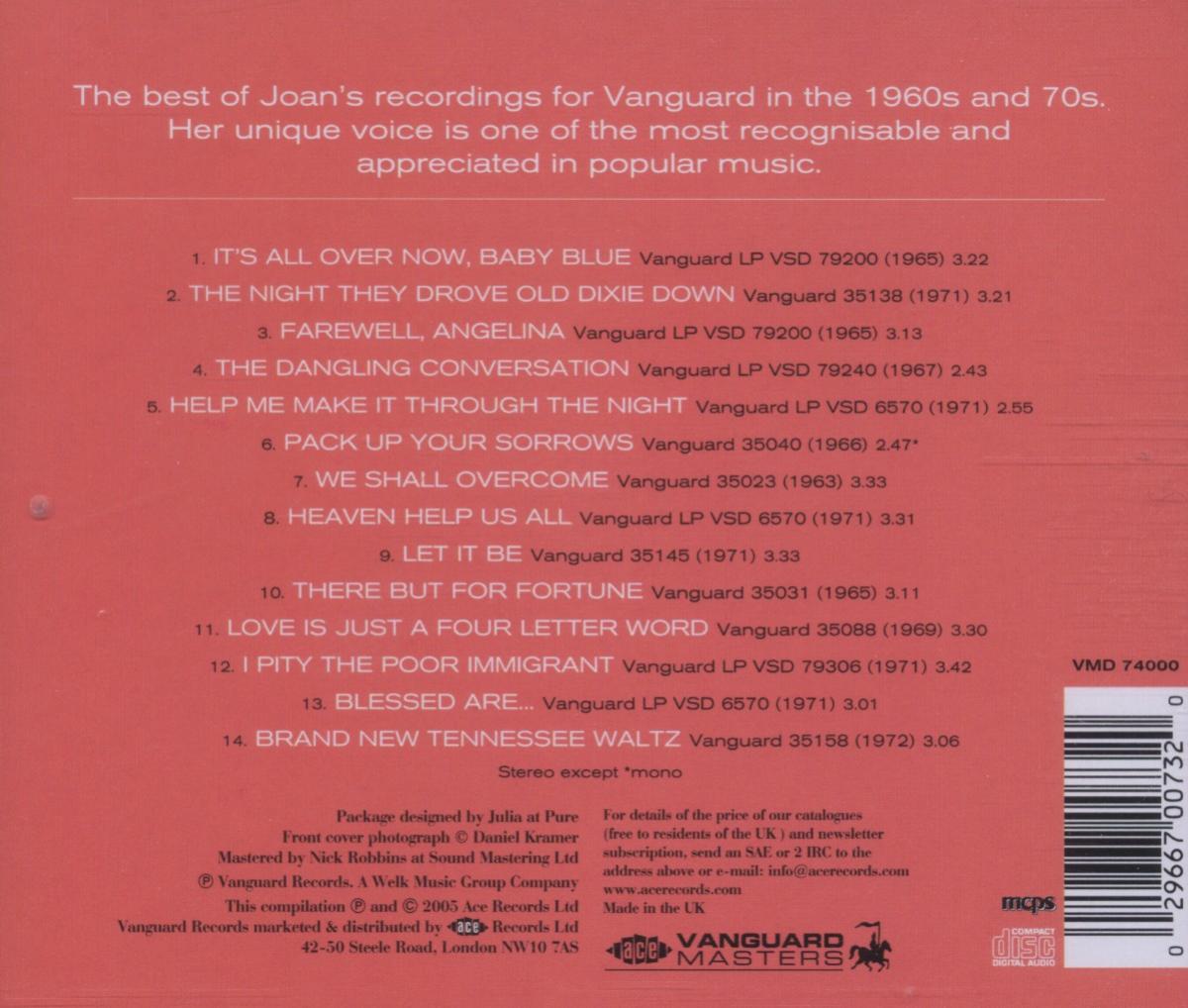 Bewertung:
lieferbar innerhalb einer Woche
(soweit verfügbar beim Lieferanten)
EUR 9,99*
"The Best Of Joan Baez" showcases the major female American song interpreter of the 1960s and 70s with some of her best known performances, including songs by Bob Dylan, Phil Ochs, the Beatles and Kris Kristofferson plus the hit singles There But For Fortune and The Night They Drove Old Dixie Down.

Recorded during Joan's tenure at Vanguard Records, the songs reflect many facets of the social and musical changes going on in the 60s and early 70s. At the beginning of the 60s, belief in folk authenticity resulted in the need, as Joan has previously recalled, to be convinced that even one extra session musician would not be a "commercial" compromise to the folk process. (Ironically, her early albums had been commercial successes from the very beginning, all entering the US Top 10, eventually going gold and establishing her as the major female voice in American folk and one that would influence artists such as Judy Collins and Joni Mitchell.) After the Beatles' initial successes in America, the rock and folk genres moved inexorably closer together in the music of such bands as the Byrds, Lovin' Spoonful and Buffalo Springfield. This was not achieved, however, without some amusing repositioning on what constituted folk music and what pop. There is a scene in the movie "Festival" (made at the 1965 Newport Folk Festival) in which Baez serenades autograph hunters with an impromptu burst of the Beatles From Me To You. The fans' shock, that the Queen Of Folk should debase herself singing a pop song, is palpable. By the late 60s, the transition was complete and the various musical genres had come together in a general youth movement. The lines of demarcation had faded and it seemed perfectly appropriate for Baez to sing such songs as Let It Be and Kris Kristofferson's Help Me Make It Through The Night.

Most surprising for many of her fans at the time, were her forays into country music. Her recording of country songs wasn't new: she had already cut versions of country classics (such as Long Black Veil a hit for Lefty Frizzell) at the start of her career albeit in a 'folk' style. By the late 60s, though, she was using top-notch country session players and Nashville studios to appropriate the mainstream country sound of the era. Subverting the country genre-at the time the choice music of conservative, right-wing America-must have seemed a delicious irony but Baez obviously loved the songs and musical style, the reason that her work in this field stands up so well today. The Dylan songs Love Is Just A Four Letter Word and I Pity The Poor Immigrant come from her 1968 album "Any Day Now" which married Dylan classics to a more experimental country backing. Blessed Are, The Night They Drove Old Dixie Down, Help Me Make It Through The Night, The Brand New Tennessee Waltz, Let It Be and Heaven Help Us All are all taken from 1971's "Blessed Are" album. The Night They Drove Old Dixie Down was originally a Robbie Robertson song on the Band's second album but, in this session in Nashville, Joan reinterpreted it with an upbeat, decidedly country gospel-tinge. Released as a 45 rpm single, it became a major chart hit for the label and one of her most durable recordings.