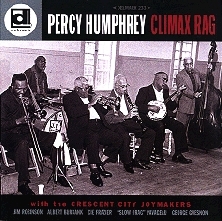 Bewertung:
lieferbar innerhalb 1-2 Wochen
(soweit verfügbar beim Lieferanten)
EUR 18,99**
EUR 17,99*
Versandkosten
Traditional jazz trumpeter Percy Humphrey came from a family that had a presence in jazz from its earliest days and contributed three generations of jazzmen to the music;Percy, his grandfather, father and two brothers were all New Orleans jazz musicians. Choosing npot to travel, Percy stayed in New Orleans with family and his insurance job. He also led the Eureka Brass Band. In the early '60s he played with Sweer Emma Barrett and his was the first band to tour under the Preservation Hall name. This 1965 session finds Percy Humphrey playing better than ever, with a full, ringing tone deriving from his parade band days and having an ability to drive a band along second to none in New Orleans.