Holly Williams: Here With Me 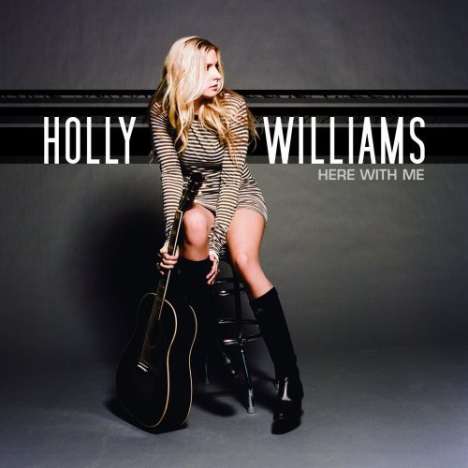 Gretchen Peters
The Show - Live From The UK (Digibook)
2 CDs
EUR 18,99*
With her debut album Here With Me for Mercury Nashville, Holly has succeeded in creating the type of album that would easily find a place among the works of her favorite artists. Penning the majority of the album's 11 tracks, Holly writes with piercing clarity on situations plucked from her life. While these songs come from extremely personal places, Holly's emotional honesty and commanding vocal performances give Here With Me a timeless quality that only gets richer on repeated listens.

Holly’s new songs began to take on a more straightforward tone. One song in particular, "Mama", struck a chord with Holly's live audiences and eventually led to a record deal with Mercury Nashville.

Taking on the touchy, yet all too commonplace topic of divorce, "Mama" tells the story of Holly's own mother and the positive attitude she displayed to her daughters while splitting up with their father. "So many parents talk about their spouses so horribly in front of their kids", Holly says. "One thing my parents never did was talk about each other in a negative light", she says. "There's two lines in ‘Mama' that really stick out to me – ‘You were smiling when you could've been crying all night' and ‘You never wore your pain too thick.’ It's such an important thing they did for us. I don't think I realized it until I was 25 though. I feel like it relates. Everyone knows someone who has that story going on in their lives."

As it turns out, "Mama" is just the tip of the iceberg on this collection of gems. Whether flowing from Holly's own pen or selected from the exceptional catalog of Nashville's top tunesmiths, the songs on Here With Me each contain a vulnerably honest quality brought to life by Holly's stunning vocal performances. Blessed with an extremely versatile instrument, Holly possesses the ability to wrap her voice around a lyric, wringing the emotion out of every syllable whether she's conveying a defiant determination to survive a heartbreak, expressing the subtle nuances of regret or playfully telling the story of a new love.

Nowhere is Holly's gift with a lyric more evident than on the project's first single, "Keep The Change", an anthem exploring the moment an old love starts to become history. Written by Hillary Lindsey and Luke Laird, Holly even breaks new ground for herself on "Keep The Change" with her gritty vocal delivery. She says, "I've never written anything myself that allows my voice to go where it does on 'Keep The Change.' Every single person can relate to that story. We've all been to that point when a love is over and you're bedridden and miserable, but then the sun shines, and you say, 'OK, I'm gonna get in my car and get out even though I'm dying inside.' It's that first step of moving on with your life."

Sometimes when that love is over, the pain is slow to subside -- a situation Holly eloquently explores in the straightforward lyrics of "I Hold On". Holly explains, "I was having a hard time letting go of a past relationship, I wrote this song quickly and simply – ‘I used to move on easy I was strong / Like a widow to her lover I hold on’ -- I was really trying to be literal about hanging on to something. We kept the production simple, and the lyric is definitely foremost on this track."

Where "I Hold On" pertains to a particular time and place, the pointedly confrontational lyrics of "He's Making A Fool Out Of You" – ‘I can't believe it / How'd you get here / I remember you when you were smart’ -- has a more mysterious origin. "I started this song at three in the morning while on the road in Scotland. It just came out of nowhere", Holly says. In fact, it was only later she realized the song could pertain to the couples she grew up seeing smiling their way through Nashville cocktail parties while their marriages were in shambles.

"My parents' friends had that situation going on where the wives would be on some tours, and the girlfriend would be on others. Sometimes these people were the ones giving me advice to stay true to myself, and they were living this life. I'm not putting them down, because I've never been there. I just didn’t understand how they could deal with that personally and look so happy on the outside."

On another one of Here With Me’s stand out tracks, “Three Days In Bed”, Holly’s measured choice of words and haunting vocal performance paints a startling visual in the listener’s mind recounting the story of a love affair in Paris. “This song speaks for itself, inspired by truth and fantasy”, explains Holly. “It's the only track on the record that is a live performance with me and my guitar, completely raw, which was very important to me to have on this record.”

“My whole thing with writing is I love to tell a story,” Holly says. “When I listen to songs, I play the movie in my head. There are certain songs in my head I see the colors and the visuals. Tom Waits is a genius at doing this. I've always hoped some of my songs inspire vivid pictures.”

“A song that was a departure for me from what I’m used to writing, but is an absolute blast to play live is ‘Love I Think Will Last’”, Holly admits. A song which follows in the light-hearted vein of Johnny and June Carter Cash's “Jackson”, Holly continues, “People laugh at it. They love the story of it.”

While Holly has clearly forged her own musical path, shades of the Williams family musical history pop up here and there throughout Here With Me. “Alone" finds Holly tapping into the lonesome simplicity of Hank Sr.'s lyrics with a tune about her own fear of commitment, while Hank Sr.'s actual name appears in the lyrics for "Without Jesus Here With Me".