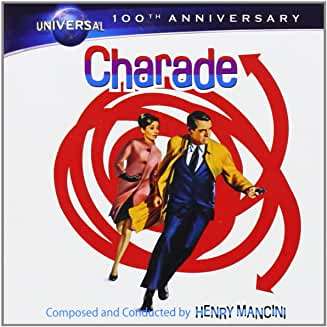 Charade is a 1963 Technicolor American romantic comedy / mystery film directed by Stanley Donen, written by Peter Stone and Marc Behm, and starring Cary Grant and Audrey Hepburn. It spans three genres: suspense thriller, romance and comedy. The film is notable for its screenplay, for having been filmed on location in Paris and for Henry Mancini's score and theme song.

Charade has received generally positive reviews from critics, and was additionally noted to contain influences of genres such as whodunit, screwball and spy thriller. Film director Stanley Donen had been charmed by Henry Mancini's song »Baby Elephant Walk« from the film Hatari!, so he contacted Mancini from London to tell him about his current picture.

Donen had directed several famous musical films throughout the 1950s and he now intended to put his own slant on a Hitchcock-like thriller and he wanted a strong melody in the background score. Johnny Mercer wrote the lyrics. The title track »Charade« is a sad, lonely Parisian waltz. It was nominated that year for the Academy Award for Best Original Song.