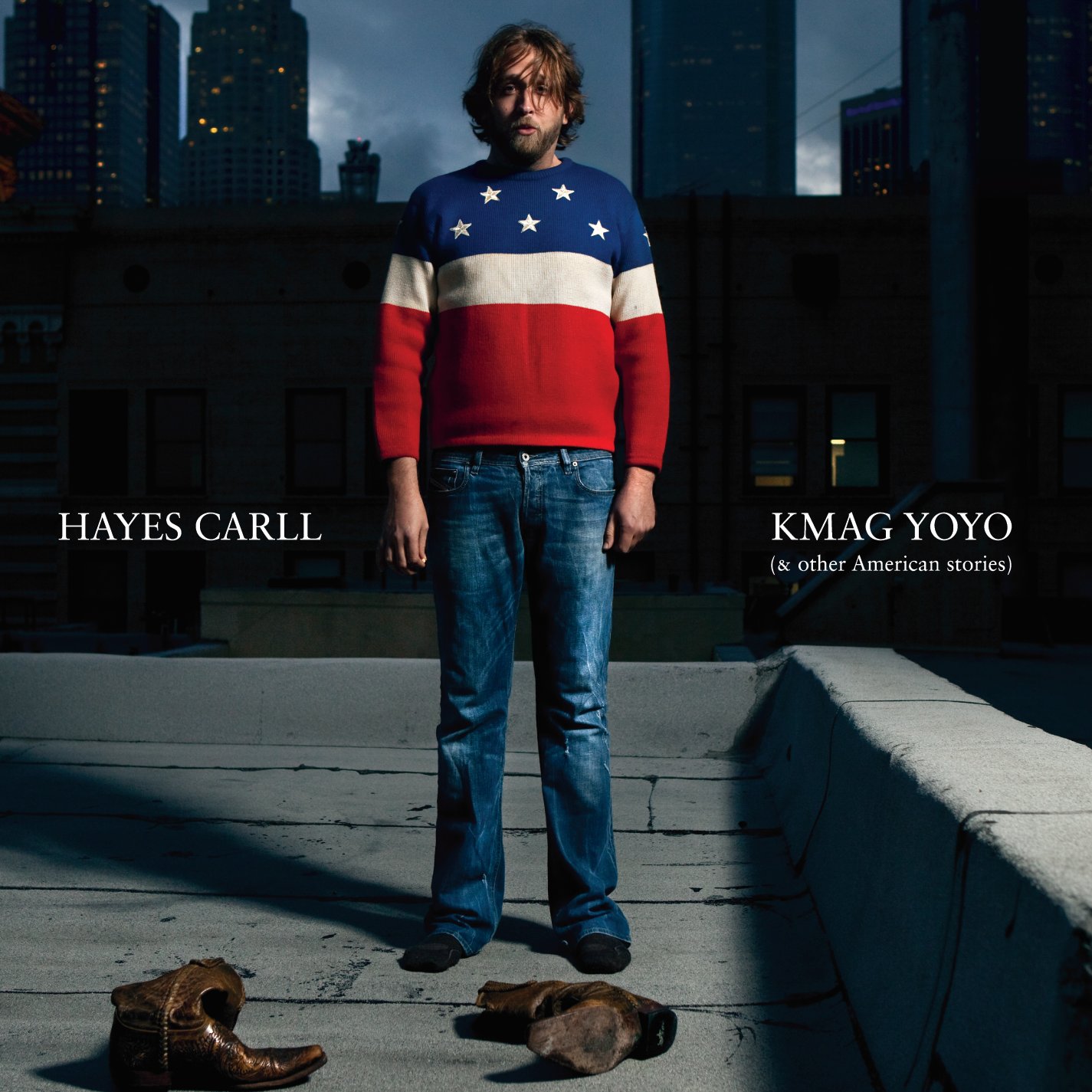 Hayes Carll
Lovers And Leavers (180g)
LP
EUR 21,49*
* Digisleeve
Hayes Carll hasn’t been resting on his laurels since topping critics polls and winning awards for his 2008 album, Trouble in Mind. Instead, he’s been on the road nearly nonstop with his band, "The Poor Choices" blasting through honky tonks and rock clubs across the U. S. and beyond. Along the way, he’s been inspired to write a crop of new tunes that the acclaimed songwriter says are “a layman’s take on our country – a snapshot of America in some small way.” The result: the sharply drawn collection KMAG YOYO (& Other American Stories), his second release from Lost Highway. KMAG YOYO is pronounced “kay-mag, yo-yo.”

A military acronym that stands for “Kiss My Ass Guys, You’re on Your Own,” the title track is one of a dozen songs that brings to life such rich characters as its protagonist, a young Army foot soldier in Afghanistan who becomes a Pentagon guinea pig. The scorching guitars of “KMAG YOYO” equate to musical adrenaline, while the hallucinatory tale of military intrigue unfolds.

Fiery rock, twangy country, pensive folk and even a touch of gospel comprise KMAG YOYO’s sonic palette, produced by Brad Jones (also at the helm for Trouble in Mind). Rather than enter the studio with a batch of completed material, Carll and his band picked up where they’d left off onstage – jamming on riffs they’d developed on the road. “I wanted to challenge myself musically,” says Carll, “and see if I could capture that live dynamic. A lot of the songs came with the music first, with the music calling the lyrics.” After completing the instrumental tracks with the band, Carll set to work, his witty wordplay matching the temper of the instrumentation. The honky-tonkin’ “Hard Out Here,” with its raucous sing-along chorus, and the full-on rocker “Stomp and Holler” document denizens making the best of the economic downturn, including one frustrated performer in “Stomp” who claims, “I’m like James Brown, only white and taller.”

A master of what Carll calls “degenerate love songs,” he takes a more tender approach on the bittersweet “Bye Bye Baby,” steel-guitar-fueled “Chances Are,” and vividly painted “Grand Parade.” A bit depraved and in the tradition of “he said / she said” duets, “Another Like You” finds Carll’s hard partying Democrat trading insults with Cary Ann Hearst’s saucy young Republican; the mismatched twosome discover that, as Carll points out, “alcohol and sexual attraction can overcome a lot.” “I’m of the opinion that almost all relationships are dysfunctional in some way or another,” says Carll about the blazing “The Loving Cup” – sure to be a dance-floor favorite.

On the rollicking “Bottle in My Hand,” Carll is joined by likeminded road warriors Corb Lund and Todd Snider in an accordion-and-banjo dosed ode to the hobo lifestyle. The spare “Grateful for Christmas” poignantly looks back at a family’s vanishing holiday traditions with the passing of time. And lifted up by old-school gospel vocals, Carll reflects on “all these years of runnin’ around / flyin’ high and fallin’ down” on the closing track, “Hide Me.”

The “most autobiographical of the bunch,” says Carll, is “The Letter,” which “was sort of my postcard home, in that I spend two-thirds of my life on the road.” Home is Austin, Texas, where the 34-year-old singer-songwriter settled four years ago with his family. Raised a sixth-generation Texan in a Houston suburb, Carll early on found inspiration in Kerouac and Dylan, hit the road after college in Conway, Arkansas, and honed his craft playing to the locals in Texas coastal towns like Crystal Beach and Galveston. His first two indie albums, Flowers and Liquor (2002) and Little Rock (2004), garnered an enthusiastic and ever-expanding audience, as did his engaging live shows, sparked by Carll’s humorous storytelling and between-song patter. Along the way he has written with some of his songwriting role models, including Guy Clark, and Ray Wylie Hubbard, with whom he collaborated on “Drunken Poet’s Dream,” one of the attention-getting tracks on Trouble in Mind. Of their kinship, Hubbard has said, “I always like writing with Hayes, because he’s fearless.”

Trouble in Mind won raves from such pundits as Robert Christgau, who called Carll, “smarter about the beat than his shambling ways would make you think and funnier than shit when he wants to be, which is often,” and Entertainment Weekly’s Ken Tucker agreed saying Carll, "was the creator of one of the year’s best country albums.” Carll’s sardonic, yet catchy “She Left Me for Jesus” raised the ire of conservative radio programmers and TV evangelists, but drove Don Imus to declare it “the greatest country song ever written.”

Putting together a band with whom to barnstorm America, Carll realized that “though I was very comfortable as a singer-songwriter, fronting a band is somewhat of a different animal. It’s kind of an evolving process,” the self-deprecating frontman continues, “learning how to play with and to trust a band was a big step for me. It ultimately opened up a whole new world of musical possibilities and I ran with it.” From Albany, New York, to Albuquerque, New Mexico, Carll and his band “worked up a dynamic between us and an energy that I liked and wanted to translate onto a record,” says Carll. So his fellow road dogs joined him in the studio to cut the multi-textured KMAG YOYO, the title track a co-write with Scott Davis and John Evans, the latter of whom also co-wrote and lends vocal harmonies to “Grand Parade.”

“We had a little bit of swagger going in, which was part of what I wanted to capture,” said Carll about the album, “we’d been out on the road for a couple years and were sounding good together. Combining that with some timely songs, I think we came up with something special.” (losthighwayrecords. com)

Hayes Carll
What It Is
CD
EUR 16,99*
alle anzeigen