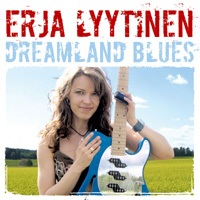 Following the musical and commercial success of Erja Lyytinen's collaboration with Aynsley Lister and Ian Parker last year, when the trio recorded the highly acclaimed 'Pilgrimage' together in the southern states of America, it seemed that the 'Bonnie Raitt of Finland' was beginning to find herself. After a series of brief flirtations with jazz, funk, and pop, Erja had now discovered her true musical home - the blues.

This was no more apparent than when she stepped foot inside Jimbo Mathus's Delta Recording Studio in Clarksdale in September 2005 during the Pilgrimage sessions.

Paradoxically, and as much a surprise to Erja as to everyone else, the spit-and- sawdust Mississippi method of making music suited the clean-cut girl from the Land of a Thousand Lakes. Funny also is the striking similarity between the landscape of Finland and that of the cotton-field dominated rural backdrop of Mississippi. In more ways than one, this young lady felt at home down there. It was therefore a given that Erja should return to Mississippi to record her first solo release on Ruf Records, Dreamland Blues.

Teaming her with David and Kinney Kimbrough (sons of Hill Country Blues Legend Junior Kimbrough) on bass and drums respectively, as well as with fellow Europian Davide Floreno on rhythm guitar and bass, the dozen songs on Dreamland Blues once again capture Erja as she absorbs the soul and spirit of Mississippi. Her gut-wrenching, down-and-dirty slide playing belies her petite northern European appearance and academic musical training. She proves here that she can cut it with the big boys in no uncertain terms. Her singing is pure and sweet, but don't be fooled, this is no shrinking violet. Take a listen to what she sings about and you'll find a self-assured, gutsy woman who's not to be messed with!

This record was cut in just four days - four days of fun and open musical exchange between a schooled Scandinavian and her 'real deal' Mississippi counterparts. Here you hear a young artist fulfilling her potential and declaring herself a fully-fledged woman of the blues. Whether it be on earthy slide guitar work-outs such as 'Good Lovin' Man', or the spine-tingling delicate instrumental 'Voyager's Rest' (named after the studio and written during the sessions!), Erja's musical persona comes to the fore in uncompromising fashion.

"She's an outstanding slide player who sings the blues with a simple, honest charm. But there's more to it than that. Erja Lyytinen radiates warmth and obviously loves making music. By the time she's finished her show, you'll have a smile on your face." (Vincent Abbate, BluesWax)