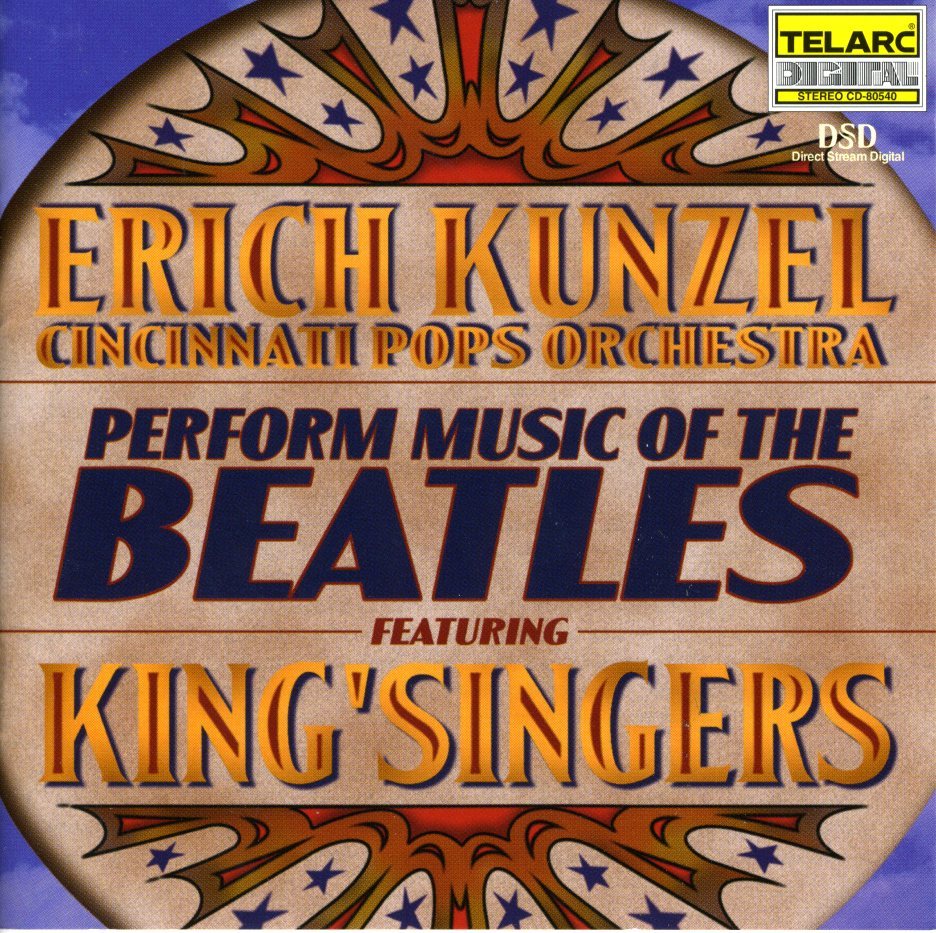 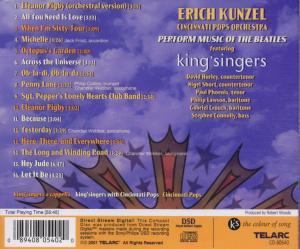 On August 29, 1966, the Beatles gave their final public concert at Candlestick Park in San Francisco. A new recording on Telarc, Erich Kunzel and the Cincinnati Pops Orchestra Perform Music of the Beatles featuring king'singers, is being released on the 35th anniversary of that singular event.

"We looked at doing a project of the Beatles' music with the Pops years ago, but it had been overdone, and often in a way that ended up sounding like Muzak," says executive producer Robert Woods, president of Telarc International. "But we've found in the collaboration with the king'singers—and in the right choice of tunes and creative arrangements—that we've put together a project that is quite unique."

Since the six talented Englishmen called king'singers founded their group at King's College in Cambridge in 1968, they have developed an astonishingly diverse repertoire that embraces the classical and the popular, the sacred and secular, the Middle Ages and the new millennium. Their performances are a virtual tour through music history, and their unique ability to communicate with audiences—young and old, in all corners of the globe—has earned them a reputation as the world's most sought-after classical / crossover vocal ensemble. After three decades, their full schedule of performances, recordings and television appearances continues to reflect their stylistic versatility and remarkable musicianship.

Whether singing a sixteenth-century Madrigal, a newly commissioned work; a Japanese folksong, or one of their trademark close-harmony arrangements of a Top 40 hit, the king'singers convey to the listener color and emotion in song. "You could say they pioneered 'crossover'...but for all their flexibility, the [king'singers] never stray far from their choirboy roots," said The Wall Street Journal.

The ensemble brings a flawless blend of musical precision, wit and panache to innovative arrangements of hits by the Fab Four. The recording opens with a flourish, in a sweeping orchestral version of "Eleanor Rigby" that segues into a classic vocal arrangement—by famed Beatles' producer, Sir George Martin—"All You Need Is Love."

The king'singers' crowd-pleasing humor comes to the fore in fun a cappella arrangements of the hit songs "When I'm Sixty-Four," and "Octopus's Garden." They provide their own vocal "accompaniment" in a smoothly articulated, polished rendition of "Eleanor Rigby."

Interspersed with the all-vocal arrangements, Kunzel leads the Cincinnati Pops Orchestra in lush renditions of the lyrical "Michelle," and "Yesterday;" plus the hits "Ob-la-di, Ob-la-da," and "Penny Lane."

The six singers—David Hurley, counter tenor; Nigel Short, counter tenor; Paul Phoenix, tenor; Philip Lawson, baritone; Gabriel Crouch, baritone; and Stephen Connolly, bass—display their signature sound and impeccable blend as they join with the orchestra for expressive performances of the pop ballads "Across the Universe," "Because" (both in arrangements by Martin), and "Let It Be." Also featured is a vivid and dramatic setting for voices and orchestra of the immensely popular "Hey Jude."

The 2000-2001 Season, the twenty-third for the Pops, was a season-long celebration of Maestro Kunzel's thirty-five years with the Cincinnati Symphony Orchestra. Since his appointment as Conductor of the Cincinnati Pops in 1977, he has led the ensemble to unprecedented success with music lovers worldwide who have discovered the CPO through tour performances and more than seventy Telarc recordings.
(concordmusicgroup. com)