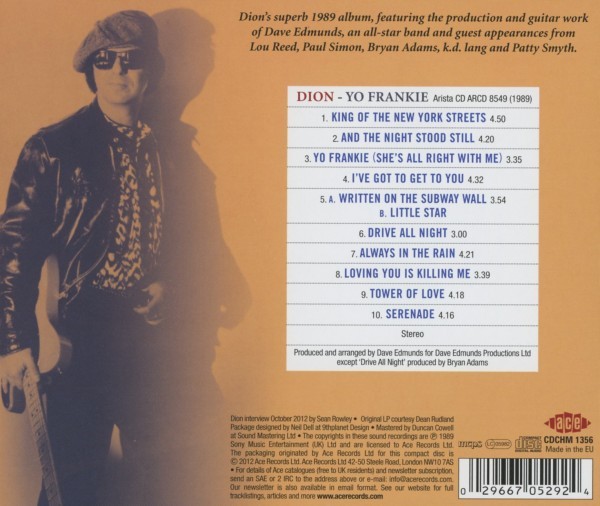 If ever there was a couplet to re-establish the early stance of Dion records, it can be found in ‘King Of The New York Streets’: “I didn’t need no bodyguard. I just ruled from my backyard”. This opening track on “Yo Frankie”, Dion’s 1989 album that has long been on Ace’s re-release wish list, sets the scene firmly amid the pavements and haunts of the Big Apple, recapturing in one song all the imagery and associations we have from the man’s classic 50s and early 60s hits.

“Yo Frankie” came about after Clive Davis and Roy Lott, the president and vice-president of Arista Records, had watched Dion perform at Radio City in 1987 and immediately offered him the chance to cut an album for them. Dave Edmunds, whose work Dion admired, was chosen to produce the record. Edmunds enlisted key players – including bassist Phil Chen, drummer Terry Williams and keyboard player Chuck Leavell – to form a tight rocking unit to drive the album. Dion prepared a wonderful set of songs, many written with his good friend Bill Tuohy, with others by Diane Warren, Bryan Adams and Tom Waits.

Alongside the quality of the material and Dion’s vocal performance, one of the most successful elements of the album is the cohesiveness of the production. Edmunds achieves a strong contemporary rock feel strongly rooted in his Rockpile work that effortlessly offers a bridge back to the feel of Dion’s earlier recordings. There are just enough echoes of the past to make everything seem familiar while still feeling fresh and new. Dion’s vocal inflections extract the maximum from the lyrical imagery, notably on the castanet-filled ‘Always In The Rain’, his favourite track on the album.

The sessions for the album attracted many big names to the studio, including Bryan Adams, who wrote, produced and played on ‘Drive All Night’. Paul Simon takes the lead and layered harmonies on the affectionately inserted ‘Little Star’ section of ‘Written On The Subway Wall’. As Lou Reed, another guest background vocalist, said in Dion’s Rock And Roll Hall Of Fame induction speech (reproduced in full in the booklet), “Dion could do all the turns. He had the chops and practically invented the attitude. After all, who could be hipper than Dion.”

The “Yo Frankie” album stands as one of the real high points in Dion’s canon. We at Ace are totally delighted to add it to our extensive catalogue of his work.