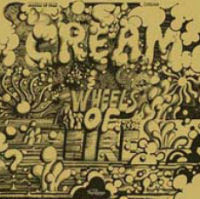 *** Gatefold Cover
Like the band's previous two releases, Cream's third album, Wheels Of Fire (1968), also topped the charts. Although it was criticized at the time for being a somewhat disjointed album, divided into one LP of new studio material and one LP of live material, it redeems itself because "White Room" has gone down in the annals history as one of the Great Moments in Rock & Roll. New reprint in golden jacket, no bonus tracks.