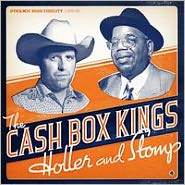 In 1990 at the age of 14, Joe Nosek moved to Chicago where he began to become exposed to the world of Chicago blues music. Every year in early June, he would camp out in Grant Park and catch nearly every minute of the three day Chicago Blues Festival. He also began sneaking into Chicago blues bars to see blues legends like Jr. Wells, James Cotton, Otis Rush, Jimmy Rogers, and Willie Dixon. Inspired by these bluesmen, Nosek took up the guitar and harmonica and began immersing himself in the great Chess, Cobra, and Vee-Jay blues recording of the 1940's and 50's. By his early twenties he began sharing the stage blowing harmonica with blues and R&B masters like Clyde "the Funky Drummer" Stubblefield, Luther Allison, and Casey Jones. In his mid-twenties, Nosek started the Cash Box K ings with Travis Koopman, Chris Boeger, Todd Cambio and Kenny 'Beedy Eyes' Smith.

"The word on the street is that The Cash Box Kings are the up and coming young guns of the Chicago blues scene, and with good reason. The music has the liveliness and energy that only roots music genius can provide." - Chicago Blues Guide