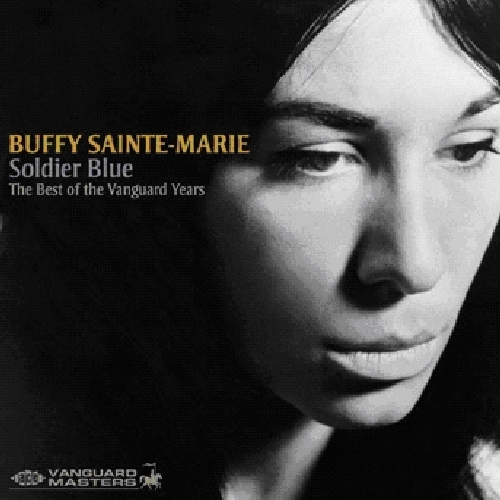 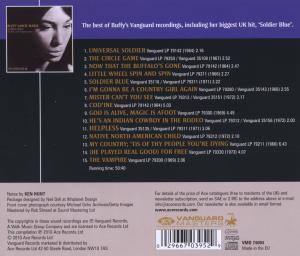 Bewertung:
Nur noch 1 Stück am Lager. Danach versandfertig innerhalb einer Woche (soweit verfügbar beim Lieferanten)
EUR 9,99*
Versandkosten
By anybody’s standards or criteria, Buffy Sainte-Marie’s tenure with Vanguard created a banquet of unparalleled work. Certain of the period’s songs became common currency and thanks to covers by Neil Diamond, Donovan, Elvis Presley, Barbra Streisand and artists of their commercial ilk and status, indeed several are so well established in the wider public imagination they count as almost authorless or at least once or twice removed from their Buffy’s name. Take ‘Universal Soldier’ – “Soldier Blue’s” opening salvo – and the way it became fused with Donovan. Or ‘Cod'ine’ – long associated with San Francisco’s Quicksilver Messenger Service and still apt to pop up on the right night in the repertoires of Courtney Love or Jefferson Starship. Her voice set her apart as a one-off, whether voice is considered from a writerly or vocal perspective. Such vibrato slivers and shivers only ever belonged to Buffy.

Her Vanguard years bore witness an astoundingly high batting average. Her influence is incalculable. The two main reasons for this are that she has one of modern music’s most signature voices – those trills and trembles could only be hers – and her songs were painted with the full palette of colours and shaded light and dark. This meant her songs not shying away from awkward or unpalatable subjects.

Alongside love calls to the living, she was penning memorialising love songs to the dead like the Native American-Native Canadian-themed ‘Now That The Buffalo’s Gone’. In lighter mood, she was cunningly re-contextualising in ‘He’s An Indian Cowboy In The Rodeo’, shifting its heart-flutter scenario into a First Nations setting. Other songs here touch on karma and Canada, magic and the supernatural. She was sending missives en clair like ‘Universal Soldier’ that anyone can recognise, intuit about, side with or against. She was also sending missives like ‘Soldier Blue’ and ‘My Country ’Tis of Thy People You’re Dying’ to inform and illuminate or send up distress flares, in the latter song phrased with journalistic, double speech marks like “How must they feel?”, “breed superstition” and “Oh what can I do?” (“say a powerless few” completes the rhyme).

She was educating in other ways as well. That might be involve one word, like introducing the Jain faith (supra Oriental Philosophy) to non-Indians in ‘Universal Soldier’ (A Catholic, a Hindu, an atheist and a who?) four decades before the Gundecha Brothers’ breakthrough recordings of Jainism’s Bhaktamar Stotra sacred chants. That also meant introducing a wider world to the fellow Canadian songwriters, notably Joni Mitchell (here represented by ‘Circle Game’ and ‘For Free’), setting Leonard Cohen to music (‘God Is Alive…’) and extending a helping hand to Neil Young by covering his song about a town in North Ontario. Young guests on her version, a rare session appearance back then.

Buffy Sainte-Marie’s post-Vanguard career never followed the buckskin Pocahontas path. It never petered out. She went on to international recognition with her television appearances on the globally syndicated television series Sesame Street and with blockbuster hits like ‘Until It’s Time For You To Go’ and ‘Up Where We Belong’ and her pioneering embrace of computer science in music and pictorial art. Neatly, George Mander of Coquitlam, British Columbia named a hybrid rose in her honour that the Vancouver Rose Society called “a fitting tribute to Canada’s folk singer”.

Soldier Blue – The Best Of The Vanguard Years could be called The Beginner’s Guide to Buffy Sainte-Marie. We hand you the keys to her treasure house, to those nine Vanguard albums from “It’s My Way” to “Quiet Places” that revealed the fullest measure of her originality, creativity and talent. But like these things should do, it is in the business of tantalising and leading you on to make further discoveries.

Buffy Sainte-Marie
Up Where We Belong
CD
EUR 18,99*