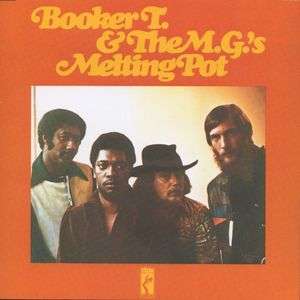 * digitally remastered
The backbone of Stax Records bade farewell to the label with this 1971 album showing the maturity they had reached in almost ten years of playing together. There's a sly nod to their past - can you spot it?

The classic '60s / early 70s soul instrumental sound from the classic '60s / early 70s soul instrumental band featuring Booker T Jones on the keyboards, Steve 'The Colonel' Cropper on guitar, Duck Dunn on bass and, one of the greatest of all soul drummers, Al Jackson on the skins. Cropper and Dunn went on to fame again with the Blues Brothers movie, albums and touring band of the same name. Al Jackson died far too soon. Melting Pot is a return of the 1971 set they cut for Stax and adds to the legacy of fine albums once again in catalogue.