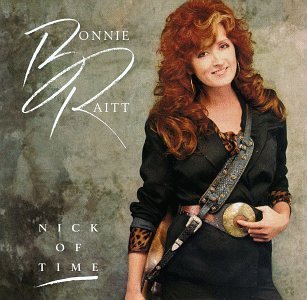 ALL MUSIC GUIDE **** "An album that included some of her strongest performances as a musician and singer. The determined "I Will Not Be Denied" seemed to say it all. Her poignant self-penned title cut revealed Raitt as a mature songwriter, on the level of the best writers whose work she had covered. Her playful version of John Hiatt's "Thing Called Love" was another high- light. All in all, this is a very seamless album. Highly recommended." F. Schöler in stereo 6 / 89: "CD des Monats. 'Nick of Time' ist ihr rundum meisterlichstes Album seit 'Sweet Forgivenees', was die Song-Auswahl, die Interpretation und die spielerischen Glanzleistungen angeht." ROLLING STONE ALBUM GUIDE **** "...she emerges with a voice easy, confident, free, robust and alive. The uptempo material - notably the hit single "Thing Called Love" (written by John Hiatt) - cooks righteously, and Raitt sounds utterly absorbed in its emotion. On me- ditative numbers such as the title song and Michael Ruff's "Cry on My Shoulder" she works from knowledge learned the hard way."