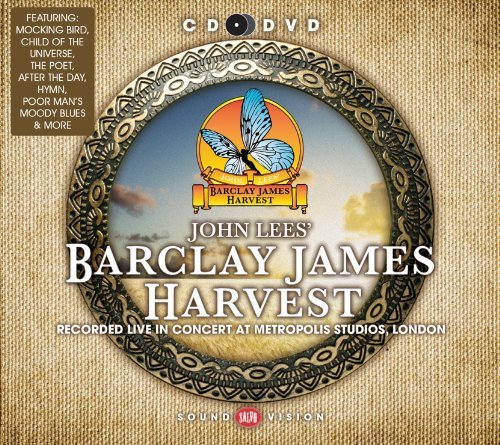 December 2010 at Metropolis Studios, West London. 120 fans are squeezed into Studio A to witness at extremely close quarters a performance by a progressive rock legend. Leader John Lees (who is also interviewed on the DVD) introduces a set which includes a wealth of Barclay James Harvest classics and no one in the room was much more than ten feet from a band that is renowned for having played to hundreds of thousands on both sides of the Berlin Wall during the 1980s.

It was during the 1970s that BJH made their mark with an impressive array of Mellotron-soaked mini-epics that owed more to Vaughan Williams than Chuck Berry. Today, of course, founder member Lees’ version of the band have the full range of 21st century technology available to present what is a selection of the best of BJH - including the poignant Child Of The Universe, the symphonic Mockingbird and of course the concluding and timeless Hymn.

It was in 2006 that principal songwriter and guitarist Lees toured the UK for the first time (with original keyboard / mellotron player Woolly Wolstenhome, now sadly deceased) as John Lees’ Barclay James Harvest. Sold out London shows, filmed for DVD release, testified to their appeal after a long absence from the stage and for the many fans not lucky enough to have attended the Metropolis show, this new live souvenir offers them an opportunity to once again be captivated by those much-loved BJH compositions.