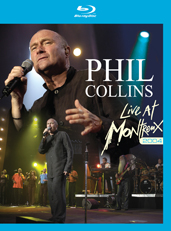 Phil Collins has made a number of appearances at Montreux over the years as a solo artist, with his big band or as a guest performer with the likes of Eric Clapton and Quincy Jones. The main show on this blu-ray was filmed in high definition at the 2004 festival and captures Phil performing all of his best known hits from his solo career. The bonus material is a performance by the Phil Collins Big Band at Montreux in 1996. This is the first time any of Phil’s big band material has been made available. This combination of all his classic songs coupled with the rarely seen big band material shows the breadth of musical genres Phil has covered in his career and makes a perfect celebration of Phil Collins’ association with Montreux.